The glands of the body are classified as being ex-ocrine or endocrine, according to the type of secretion (see Figure 1.22).

The glands of the body are classified as being ex-ocrine or endocrine, according to the type of secretion (see Figure 1.22). Exocrine glands secrete into ducts, which, in turn, are connected to body cavities, lumen of organs (e.g., salivary gland), or to the out-side of the body (e.g., sweat glands). Glands are con-sidered endocrine if they secrete chemicals into the interstitial fluid around them. These chemicals then diffuse into the circulation and have an effect on structures away from the gland. The chemicals se-creted by endocrine glands are known as hormones. Hormones, therefore, are chemical messengers re-leased by one tissue into the interstitial fluid that have an effect on other tissues.

Many hormones have been identified and many are still being identified. Each endocrine gland may secrete one or more hormones. Recently, other or-gans, such as the heart, have been found to have en-docrine function. The gastrointestinal tract also se-cretes numerous hormones, with hormones from one part of the gut affecting smooth muscle activity and secretion of glands located further away. If so many hormones are secreted into the circulation and all cells are exposed to all of them, how do hormones af-fect specific tissues?

RECOGNITION OF HORMONES BY CELLS

All cells are exposed to all hormones in the circula-tion; however, each cell has receptors on the cell membrane, cytoplasm, or nucleus that recognize and respond to only specific hormones (see Figure 6.1). 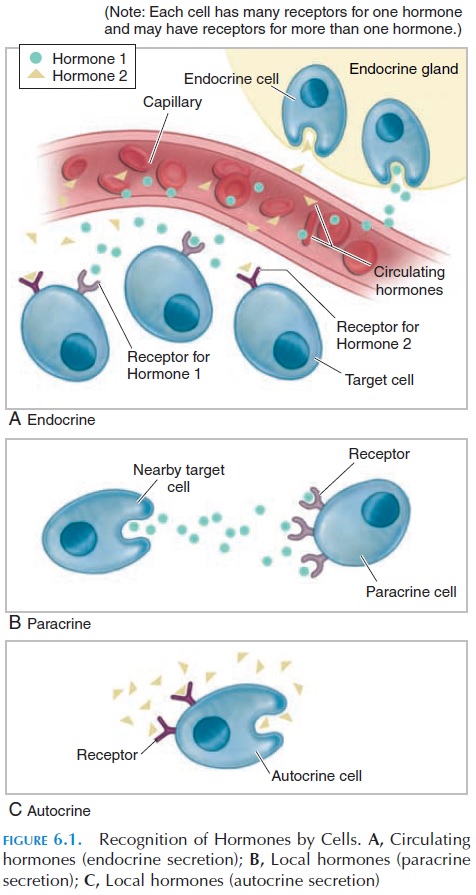 Individual target cells also have the ability to re-duce or increase the number of receptors for a par-ticular hormone. Usually, each cell may have as many as 2,000 to 10,000 receptors for a specific hor-mone. Receptors, being proteins or glycoproteins, are constantly manufactured and destroyed.

If a specific hormone excessively stimulates the cell, the number of receptors may be reduced (down-regula-tion). If the hormone stimulating the cell is defi-cient, the cell manufactures more receptors (up-regulation).

Transported by blood, hormones can affect more than one tissue at the same time. For example, hor-mones secreted by the ovaries have an effect on the uterus, vagina, breasts, and brain, etc. Tissue re-sponse to hormone stimulation is usually slow to ap-pear and may persist for days.

A striking similarity between the endocrine and nervous system is that both act on a target cell by re-leasing chemicals that bind to receptors. In fact, some of the chemical messengers used in the nervous system are the same as those used by the endocrine system. For example, the nerves of the autonomic nervous system secrete epinephrine (adrenaline) and norepinephrine (noradrenaline)—the same chemi-cals secreted as hormones into the circulation by the adrenal gland.

The chemical structure of the hormone determines if it is lipid-soluble or water-soluble. Steroids and thy-roid hormones are lipid-soluble, while other hormones are water-soluble. The chemical structure of hormones also determines, to some extent, how long the hormone stays in the circulation before it is destroyed. After se-cretion into the blood, the lipid hormones, for example, bind to proteins, enabling them to remain longer in the circulation than the peptide hormones.

An endocrine gland releases a particular hormone in response to three different types of stimuli. Some hormones are released when there is an alteration in the concentration of a specific substance in the body fluids. For example, the parathyroid gland responds to a fall in calcium levels in the blood.

Some hormones are released only when the spe-cific endocrine gland receives instructions from an-other endocrine organ. For example, the ovaries secrete estrogen when they are “instructed” by hor-mones from the pituitary. Other hormones are re-leased when nerves stimulate the gland; for example, the release of adrenaline by the adrenal gland when stimulated by sympathetic nerves. The release of some hormones is regulated by its own circulating level.

Hormones are classified as circulating or local hor-mones, depending on how far away they act. Typi-cally, hormones secreted by endocrine glands enter the circulation and have an effect on cells far away. Local hormones are those that affect neighboring cells or the cells that originally secreted the hormone (Figure 6.1). Hormones affecting neighboring cells are known as paracrine hormones; hormones af-fecting the cells from which they were secreted are known as autocrine hormones.

TRANSPORT AND DESTRUCTION OF HORMONES

Hormones are typically released where there is an abundant blood supply. Once released, the hormones quickly enter the circulation. The water-soluble hor-mones dissolve in and are carried by the plasma. Most of the lipid-soluble hormones bind to special plasma proteins (transport proteins) and are trans-ported in a bound form. When hormones are bound to proteins, they are destroyed at a slower rate and, therefore, have the capacity to exert their effects on cells for a longer time. Also, the bound hormones are a ready-made reserve that can replenish the free (un-bound) lipid-soluble hormones. It is the free hor-mones that diffuse out of the capillaries and actually affect target cells.

The freely circulating hormones are quickly inacti-vated and are functional for a short period—a few minutes to an hour. Hormones are inactivated when they enter the interstitial fluid and are bound to tar-get cells receptors, when they are absorbed by liver and kidneys cells that break them down, or when they are broken down by enzymes in the plasma or interstitial fluid. In patients with liver or kidney fail-ure, the hormones are not destroyed as rapidly and signs and symptoms of hormone hypersecretion may be observed.

On binding to a cell receptor, hormones bring about many different types of responses. Some hor-mones stimulate the synthesis of enzymes not al-ready present in the cytoplasm by activating specific genes in the nucleus. Some hormones affect the pro-duction rate of certain enzymes or structural pro-teins. Some hormones can alter the action of en-zymes by changing its shape or structure. Thus, hormones can alter the physical structure or the bio-chemical properties of the cell. Effects such as alter-ation of cell permeability, degree of smooth muscle contraction, change in cardiac muscle contraction, and secretions by cells can be produced.

The effect of hormones on cells depends on the quantity of hormones in the fluid, the number of re-ceptors in the target cell, and the influence of other hormones released at the same time. When a high quantity of hormones is released or there are more receptors in the target cell, the physiologic response is vigorous. Some hormones require the action of an-other hormone before they can produce a cell re-sponse. The second hormone is said to have a per-missive effect. Sometimes, two hormones produce agreater physiologic response than they would if act-ing alone; each hormone is said to have a synergisticeffect. Often, one hormone opposes the effect of an-other hormone; an antagonistic effect.