The paired adrenal glands are located on the superior and medial aspects of the kidney, similar to pyramid- shaped cap.

The paired adrenal glands are located on the superior and medial aspects of the kidney, similar to pyramid- shaped cap. As a result of their anatomic location, they are also known as suprarenal glands. They are found at the level of the twelfth rib, or T11–T12 verte-bral levels, and are firmly attached to the kidney by a thick connective tissue capsule that surrounds them. The adrenal glands are in close contact with the di-aphragm (superiorly) and large arteries and veins (medially). Anteriorly, the adrenal glands are covered by the parietal peritoneum and are, therefore, con-sidered to be retroperitoneal. As with other endocrine glands, they have a rich blood supply. 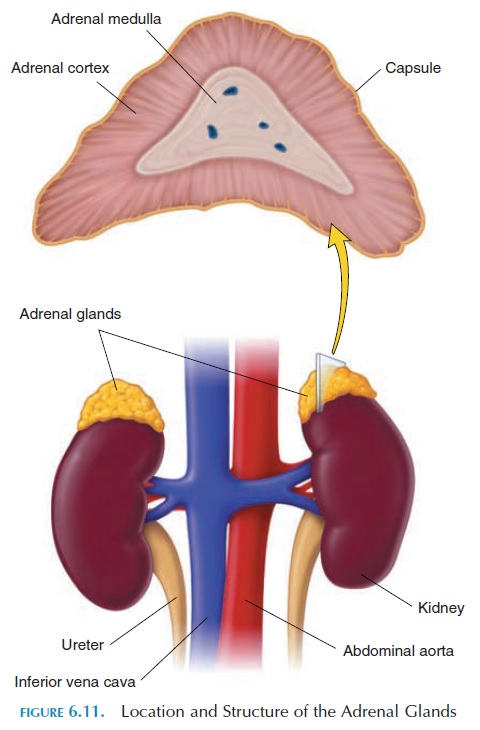 Essential for life, the outer adrenal cortex secretes hor-mones that have widespread effects of carbohydrate, protein, and fat metabolism and in electrolyte balance. More than 24 hormones, collectively known as adrenocortical steroids or corticosteroids, are se-creted. However, only a few are secreted in physiolog-ically significant amounts. The adrenal cortex is con-sidered to have three zones. The outer zone—zonaglomerulosa—secretes mineralocorticoids, of which aldosterone is principal. As the name suggests, themineralocorticoids have a major effect on the levels of minerals, such as sodium and potassium, in the body fluids. The middle zone, or zona fasciculata, secretes glucocorticoids. These hormones affect glucose me-tabolism. The principal glucocorticoids are cortisol (hydrocortisone), cortisone, and corticosterone. The innermost zone of the cortex is the zona reticularis, which secretes small quantities of androgens, or sexhormones. The principal hormones are dehydroepi-androsterone and androstenedione.

All of the steroids in the adrenal cortex are derived from cholesterol. By the action of various enzymes located here, cholesterol is converted to the respec-tive hormones through complex chemical reactions. Congenital absence of certain enzymes can lead to abnormalities and accumulation of precursors, as the chemical reactions cannot proceed beyond a certain point. To understand the signs and symptoms that ac-company adrenal cortex malfunction, it should be understood that all steroids share the functions of others. For example, mineralocorticoid, although its major function is electrolyte balance, also has some glucocorticoid and androgenic functions. Similarly, glucocorticoids have some mineralocorticoid and an-drogenic function.

The target organ of aldosterone is the kidney. Aldos-terone reduces the excretion of sodium in the urine by stimulating reabsorption from the kidney tubules into blood. Water is reabsorbed by osmosis along with sodium. Potassium, however, is lost in exchange for sodium. Thus, aldosterone is important in conserving salt and water.

Aldosterone is particularly important when the extracellular fluid volume is reduced and the blood pressure drops, as in dehydration. Apart from its effect on the kidneys, aldosterone reduces sodium and water loss via sweat glands, salivary glands, and the digestive tract. The hormone angiotensin II stimu-lates aldosterone secretion.

Glucocorticoid secretion is stimulated by ACTH from the pituitary. ACTH is regulated by CRH from the hy-pothalamus. By negative feedback, glucocorticoids alter the levels of ACTH and CRH.

Glucocorticoids have a glucose-sparing effect (i.e., they increase the formation of glucose and glycogen). Fatty acids and proteins are used for metabolism in-stead of glucose. Adipose tissue is broken down and fatty acids are released into the circulation. In the ab-sence of glucocorticoids, water, carbohydrate, pro-tein, and fat metabolism are abnormal and exposure to even minor stresses can result in collapse of the in-dividual and death. Glucocorticoids are required for a number of metabolic reactions. They are also re-quired for vascular smooth muscles to respond nor-mally to sympathetic stimulation. They have an anti-insulin effect and increase the level of glucose in the blood and reduce the uptake of glucose by all tissue other than the brain and the heart.

Another powerful effect of glucocorticoids is the anti-inflammatory effect. Glucocorticoids inhibit the activities of white blood cells and other components of the immune system. Lymph nodes and the thymus are atrophied. They reduce the rate of white cell migration into injured areas and prevent mast cells from releas-ing products, such as histamine, that are responsible for inflammation. As a result of this steroid effect, syn-thetic steroids are often used to reduce inflammation, especially in chronic inflammatory conditions; for al-lergies; and to reduce adhesions. Steroids are, there-fore, used as ointments, eyedrops, tablets, and injec-tions. However, steroids slow the healing of wounds by inhibiting fibroblastic activity. Because they retard the immune system and lower defenses, the incidence of infection is increased in individuals on steroids.

Other glucocorticoid effects include effects on the nervous system. Glucocorticoid deficiency results in personality changes, such as irritability, apprehen-sion, and the inability to concentrate. Glucocorti-coids, like mineralocorticoids, cause retention of sodium and water.

Androgens liberated by the adrenal cortex exert a masculinization effect. They promote growth and protein formation. These androgens are less potent than testosterone, the androgenic hormone secreted by the testis. In adult men, excess androgens accen-tuate the male characteristics; however, in young boys, it can cause premature development of male sexual characteristics such as growth of beard, pubic, and axillary hair and external genitalia (adrenogeni-tal syndrome). In females, facial hair, baldness, re-ceding hairline, small breasts, heavy arms and legs, and enlarged clitoris are some of the findings.