Gauge is defined as the minimum distance between two rails.

In European countries, the gauge is measured between the inner faces of the two rails at a point 14 mm below the top of the rail. This chapter describes the different gauge widths prevalent in India and other countries. It also discusses the problems and implications of a multiple-gauge system as adopted in India.

Various gauges have been adopted by different railways in the world due to historical and other considerations. In British Railways, a gauge of 1525 mm (5 feet) was initially adopted, but the wheel flanges at that time were on the outside of the rails. Subsequently, in order to guide the wheels better, the flanges were made inside the rails. The gauge then became 1435 mm (4' 8.5" ), as at that time the width of the rail at the top was 45 mm (1.75" ). The 1435-mm gauge became the standard gauge in most European Railways. The approximate proportions of various gauges on world railways are given in Table 2.1. 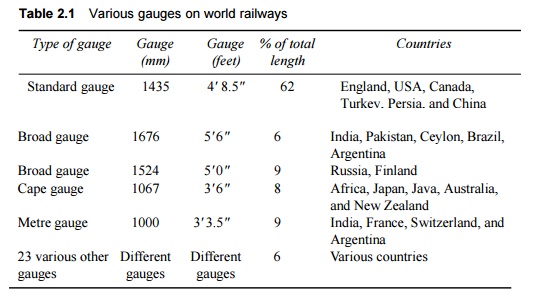