From Chiefdoms to Empires

Learning Objectives • To know the factors responsible for the rise of Janapadas and Mahajanapadas. • To understand the evolution of Indian polity from Chiefdoms to Kingdoms.•To recall the greatness of Mauryan Empire. • To learn the main features of the administration and the nature of the society & economy during that time. • To gain the knowledge on Ashoka’s policy of Dhamma. •To examine the causes for the decline of Mauryan Empire.VI

From Chiefdoms to Empires

• To know the factors responsible for the rise of Janapadas and Mahajanapadas.

• To understand the evolution of Indian polity from Chiefdoms to Kingdoms.•To recall the greatness of Mauryan Empire.

• To learn the main features of the administration and the nature of the society & economy during that time.

• To gain the knowledge on Ashoka’s policy of Dhamma.

•To examine the causes for the decline of Mauryan Empire.VI

Importance of Sixth Century BC (BCE)

During the sixth Century BC (BCE) many territorial states emerged. This Led to the transformation of socio – economic and political life of the people in the Gangetic plains. A new intellectual awakening began to develop in northern India. Mahavira and Gautama Buddha represented this new awakening.

Role of iron in a changing society

Iron played a significant role in this transformation of society. The fertile soil of the Gangetic Valley and the use of iron ploughshares improved agricultural productivity. In addition, iron facilitated craft production. Agrarian surplus and increase in craft products resulted in the emergence of trading and exchange centres. This in turn paved the way for the rise of towns and cities. Thus, knowledge in the use of iron gave Magadha an advantage over other Mahajanapadas. Thus the Magadha could establish an empire of its own.

A ‘kingdom’ means a territory ruled by a king or queen. In a kingdom (monarchy), a family, which rules for a long period becomes a dynasty. Usually these kingdoms adhered to orthodox Vedic traditions.

Janapadas were the earliest gathering places of men. Later, Janapadas became republics or smaller kingdoms. The wide-spread use of iron in Gangetic plain created conditions for the formation of larger territorial units transforming the janapadas into Mahajanapadas.

Sixteen Mahajanapadas dotted the Indo-Gangetic plain in the sixth century BC (BCE). It was a transition from a seminomadic kinship - based society to an agrarian society with networks of trade and exchange. Hence an organized and a strong system of governance required a centralised state apparatus.

There were four major Mahajanapadas They were:

• Kosala in Eastern Uttar Pradesh and

Among the four Mahajanapadas, Magadha emerged as an empire.

The Causes for the Rise of Magadha

* Magadha was located on the lower part of the Gangetic plain. The plain was fertile which ensured the rich agricultural yield. This provided regular and substantial income to the state.

* The thick forests supplied timber for construction of buildings and elephants for army.

* Abundance of natural resources especially iron enabled them to equip themselves with weapons made of iron.

* The outcome was urbanization and emergence of Magadha as an empire. 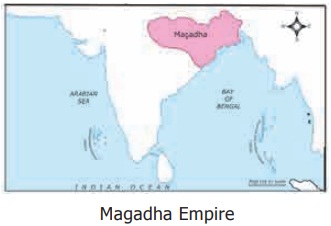 Bimbisara extended the territory of Magadhan Empire by conquests and by matrimonial alliances with Lichchhavis, Madra and Kosala. His son Ajatasatru, a contemporary of Buddha, convened the first Buddhist Council at Rajagriha. Udayin, the successor of Ajatasatru, laid the foundation of the new capital at Pataliputra.

Nandas were the first empire builders of India. The first Nanda ruler was Mahapadma. Mahapadma Nanda was succeeded by his eight sons. They were, known as Navanandas (nine Nandas). Dhana Nanda, the last Nanda ruler, was overthrown by Chandragupta Maurya.

Nalanda was a large Buddhist monastery in ancient kingdom of Magadha. It became the most renowned seat of learning during the reign of Guptas. The word Nalanda is a Sanskrit combination of three words Na + alam + daa meaning “no stopping of the gift of knowledge”. 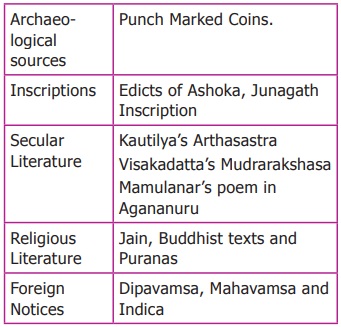 He was the ambassador of the Greek ruler, Seleucus, in the court of Chandra Gupta. He stayed in India for 14 years. His book Indica is one of the main sources for the study of Mauryan Empire. 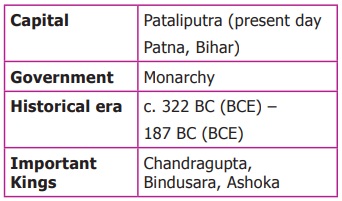 The great capital city in the Mauryan Empire, which had 64 gates to the city with 570 watch towers. 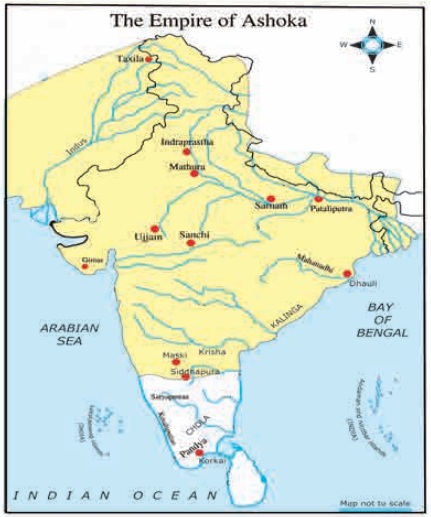 The Mauryan Empire was the first largest empire in India. Chandragupta Maurya established the empire in Magadha.

Chandragupta performed Sallekhana (Jaina rituals in which a person fasts unto his death) in Sravanbelgola (Karnataka).

Real name of Bindusara was Simhasena. He was the son of Chandragupta Maurya. Greeks called Bindusara as Amitragatha, meaning ‘slayer of enemies’. During Bindusara’s reign Mauryan Empire spread over large parts of India. He appointed his son Ashoka as a governor of Ujjain. After his death, Ashoka ascended the throne of Magadha.

Ashoka was the most famous of the Mauryan kings. He was known as ‘Devanam Piya’ meaning ‘beloved of the Gods’.

Ashoka fought the Kalinga war in 261 BC (BCE). He won the war and captured Kalinga.

The horror of war was described by the king himself in the Rock Edict XIII.

“Ashoka shines and shines brightly like a bright star, even unto this day”- H. G. Wells , Historian

The Emblem of the Indian Republic has been adopted from the Lion Capital of one of Ashokas pillars located at Sarnath. The wheel from the circular base, the Ashoka Chakra is a part of the National Flag 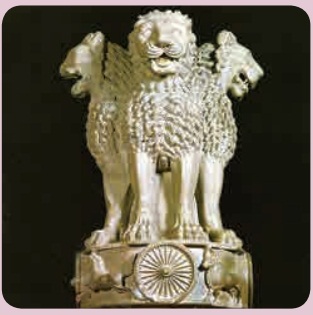 After the battle of Kalinga, Ashoka became a Buddhist. He undertook tours (Dharmayatras) to different parts of the country instructing people on policy of Dhamma. The meaning of Dhamma is explained in Ashoka’s – Pillar Edict II

It contained the noblest ideas of humanism, forming the essence of all religions.

He laid stress on

* Obedience and respect for parents, preceptors and elders.

Ashoka sent his son Mahinda and Sanghamitta to Srilanka to propagate Buddhism. He also sent missionaries to West Asia, Egypt, and Eastern Europe to spread the message of Dhamma. The Dhamma-mahamattas were a new cadre of officials created by Ashoka. Their job was to spread dhamma all over the empire. Ashoka held the third Buddhist Council at his capital Pataliputra.

The 33 Edicts on the pillars as well as boulders and cave walls made by the Emperor Ashoka, describe in detail Ashoka’s belief in peace, righteousness, justice and his concern for the welfare of his people.

An Edict is an official order or proclamation issued by a person in authority or a king. 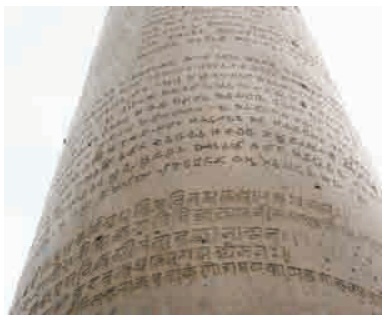 The script of the inscriptions

At Kandahar – Greek and Aramaic

The Rock Edicts II and XIII of Ashoka refer to the names of the three dynasties namely Pandyas, Cholas, the Keralaputras and the Sathyaputras.

* The king was the supreme and sovereign authority of the Mauryan Empire.

* Council of ministers known as mantriparishad assisted the King. Assembly of ministers included a Purohit, a Senapathi, a Maha mantri and the Yuvaraja.

* King had an excellent spy system.

* The land was the most important source of revenue for the state. Ashokan inscription at Lumbini mentions bali and bagha as taxes collected from people. The land tax (bhaga) collected was 1/6 of the total produce.

* Revenue from taxes on forests, mines, salt and irrigation provided additional revenue to the government.

* Much of the State revenue was spent on paying the army, the officials of the royal government, on charities and on different public works such as irrigation project, road construction etc.

* The king was the head of the Judiciary. He was the highest court of appeal.

* King appointed many judges subordinate to him. The punishments were harsh.

The king was the supreme commander of the army.

A board of 30 members divided into six committees with five members on each, monitored

* Board of 30 members divided into six committees. Each had 5 members to manage the administration of the city.

* Town administration was under Nagarika. He was assisted by Sthanika and Gopa.

The Junagarh / Girnar Inscription of Rudradaman recordsthat the construction of a water reservoir known as Sudarshana Lake was begun during the time of Chandragupta Maurya and completed during Ashoka’s reign.

Money was not only used for trade; even the government paid its officers in cash. The punch marked silver coins (panas) which carry the symbols of the peacock, and the hill and crescent copper coins called Mashakas formed the imperial currency. 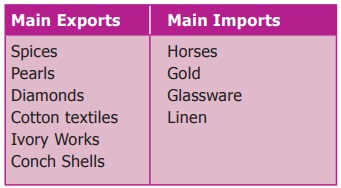 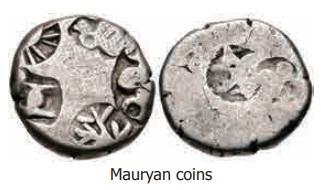 Mauryan art can be divided into two

Yakshas were deities connected with water, fertility, trees, the forest and wilderness. Yakshis were their female counterpart. 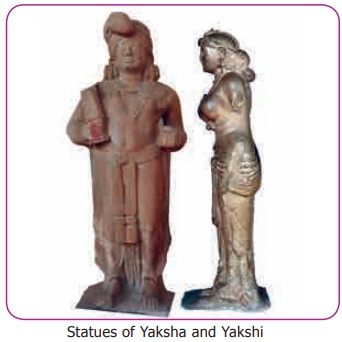 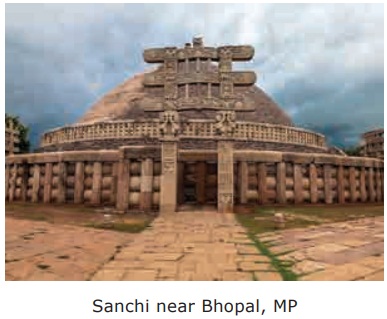 A Stupa is a semi – spherical dome like structure constructed on brick or stone. The Buddha’s relics were placed in the centre of the dome.

The crowning element in this pillar is Dharma chakra. 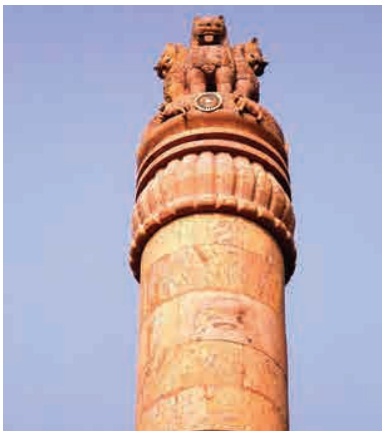 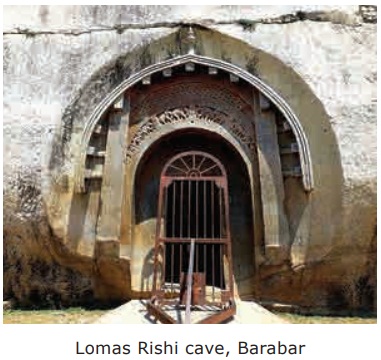 There are several caves to the north of Bodh Gaya. Three caves in Barabar hills have dedicativeinscription of Ashoka. And three in Nagarjuna hills have inscriptions of Dasharatha Maury (grand son of Ashoka).

Reasons for the Decline of the Mauryan Empire

* Continuous revolts in different parts of the empire.

* Invasion by the Bactrian Greeks weakened the empire.

Elswhere in the world

The Great Wall of China

It is an ancient series of fortification. During third century BC (BCE) emperor Qin-ShHuang linked these walls on Northern border to protect his empire

Temple of Zeus at Olympia

An ancient temple in Olympia, Greece, dedicated to the god Zeus, constructed durinfifth century BC (BCE), It is one of the seven wonders of the ancient world.

* Sixth century BC (BCE) forms an important landmark as it witnessed the emergence of sixteen Mahajanapadas.

* Among the sixteen Mahajanapadas, Magadha emerged as an empire.

* Magadha was ruled by four dynasties- The Haryanka, the Shishunaga, the Nanda and the Maurya dynasty.

* Ashoka was the most famous of the Mauryan kings.

* Ashoka’s pillar and Rock Edicts enlighten us on his ideas of Dhamma.

Egalitarian –a person who advocates the principle of equality for all. (சமத்துவம்)

Monastery –a building in which monks live and worship. (மடாலயம்)

Treatise –a written work dealing systematically with a subject. (ஆய்வுக்கட்டுரை)

Histroy from Chiefdoms to Empires

This activity for Maps based on Vector database is a INTERACTIVITY ATLAS which helps to know about Comparative History, Political, Military, Art, Science, Literature, Religion and Philosophy in the world.

Step – 1: Open the Browser and type the URL given (or) Scan the QR Code.

Step-3 : You will enter any kingdom period or political period (ex. Magadha Empire).

Step-4 : You will get vector database map. 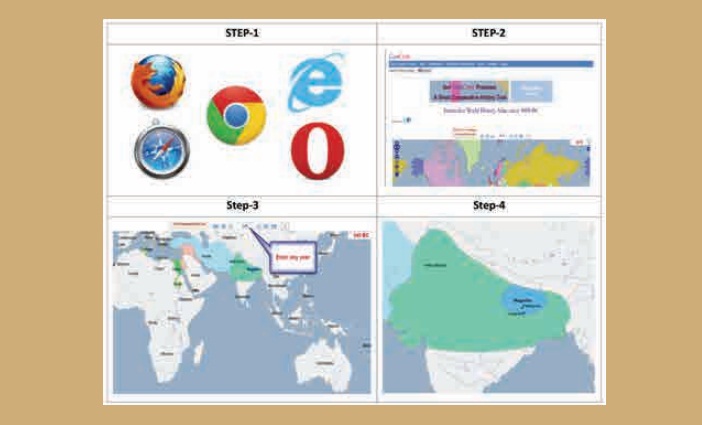