I. Choose the correct answer:

1. What is the name of the Buddhist scripture?

2. Who was the first Tirthankara of Jainism?

3. How many Tirthankaras were there in Jainism?

4. Where was the third Buddhist Council convened?

5. Where did Buddha deliver his first sermon?

II Match the Statement with the Reason. Tick the appropriate answer:

1. Statement: A common man could not understand upanishads.

a. Statement and its Reason are correct.

b. Statement is wrong.

c. Statement is true, but the Reason for that is wrong.

d. Both Statement and Reason are wrong.

Answer: a) Statement and its Reason are correct.

2. Statement: The Jatakas are popular tales.

Reason: Frescoes on the ceilings and walls of Ajanta caves depict the Jataka Tales.

a. Statement and its Reason are correct.

b. Statement is wrong.

c. Statement is true, but the Reason for that is wrong.

d. Both statement and Reason are wrong.

Answer: a) Statement and its Reason are correct.

3. Find out the correct answer:

Buddha Viharas are used for

4. Consider the following statements regarding the causes of the origin of Jainism and Buddhism.

I. Sacrificial ceremonies were expensive.

Which of the above statement (s) is/are correct?

d. Neither I nor II

5. Which of the following about Jainism is correct?

a. Jainism denies God as the creator of universe.

b. Jainism accepts God as the creator of universe.

c. The basic philosophy of Jainism is idol worship.

Answer: a) Jainism denies God as the creator of universe.

7. Find out the wrong pair:

a. Ahimsa - not to injure

b. Satya - to speak truth

c. Asteya - not to steal

8. All the following statements are true of Siddhartha Gautama except:

a. He is the founder of Hinduism.

b. He was born in Nepal.

d. He was known as Sakyamuni.

Answer: a) He is the founder of Hinduism.

III Fill in the blanks:

1. The doctrine of Mahavira is called Tri-rathnas.

2. Nirvana is a state of freedom from suffering and rebirth.

3. Gautama Buddha was the founder of Buddhism.

4. Thiruparthikundram, a village in Kanchipuram was once called Jina Kanchi.

5. Stupas were built over the remains of Buddha’s body.

VI Answer in one or two sentences:

1. What are the Tri-ratnas (three jewels) of Jainism?

2. What are the two sects of Buddhism?

The two sects of Buddhism are Hinayana and Mahayana.

Jina means 'one who conquered worldly pleasures and attachment'.

4. Write any two common features of Buddhism and Jainism.

Both Mahavira and Buddha hailed from royal families. Yet they renounced royal privileges and chose to adopt an ascetic life.

They denied the authority of Vedas. They taught in the language of the common people.

5. Write a note on Buddhist Sangha.

Buddha laid foundation for a missionary organization called Sangha, meaning 'association’ for the propagation of his faith. The members were called bhikshus (monks). They led a life of austerity.

1. Name the eight-fold path of Buddhism?

2. What are the five important rules of conduct in Jainism?

❖ Ahimsa - not to injure any living beings

❖ Aparigraha - not to own property

❖ Life is full of sorrow and misery.

❖ Desire is the cause of misery.

❖ Sorrows and sufferings can be removed by giving up one's desire.

❖ We can overcome desire by following the right path. (Noble eight-fold path)

4. Write any three differences between Hinayana and Mahayana sects of Buddhism?

1. Did not worship idols or images of Buddha.

3. Believed in Salvation of the individual as its goals.

3. Believed in salvation of all beings as its objective.

5. Jainism and Buddhism flourished in Sangam period. Give any two evidences for each.

❖ In ancient Tamil literature, Jainism is referred to as Samanam.

❖ There is a Samanar Hill or Samanar Malai in Keelakuyilkudi village, 15 km away from Madurai. The images of Tirthankaras created by Jain monks are found in the hill.

❖ Manimekalai, one of the epics of the post-Sangam age is a Buddhist literature.

❖ There is an elaborate description about Kanchipuram in classical epic Manimegalai.

1. Read any one story from Jatakas and write a similar story on your own.

2. Make a tabular column in the following headings.

3. Place the following words in the appropriate column.

5. Make a Venn diagram to indicate similarities and dis-similarities of Jainism and Buddhism. 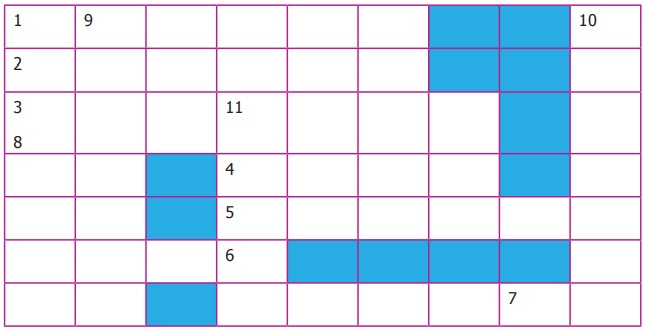 1. One of the Tri Rathna: Right - ACTION

2. Buddha’s teachings are referred as - DHAMMA

3. A great centre of education - NALANDA

5. Not to injure any living being - AHIMSA

7. The Quality of man’s life depends on his deed - KARMA

10. A state of freedom from birth - NIRVANA 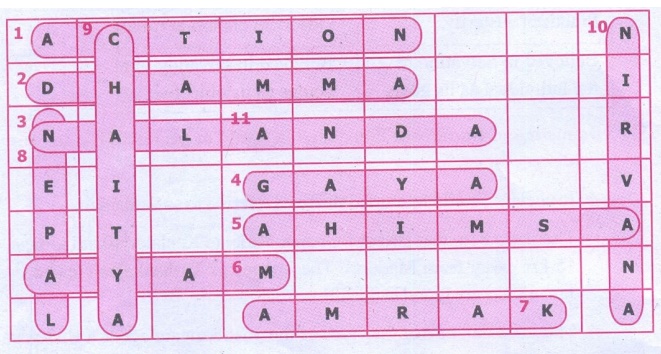 Create a story board for Jainism/Buddhism in a chart Model.

The Jain monks who wear white cloths are called

What is the meaning of Buddha?

Who is the 24th Tirthankara of Jainism?

How many noble truths are there in Buddhism?

Which religion's teachings include four noble truths and eitht-fold path?

Name the earliest Buddhist literature which deals with the stories of various births of Buddha?

Name any four places where Jain monasteries were located in Tamil Nadu.

Name one of the twin classical Epics