Although the amount, quality and availability of food composition data vary among countries and regions, in general most developing countries still do not have adequate and reliable data.

Although the amount, quality and availability of food composition data vary among countries and regions, in general most developing countries still do not have adequate and reliable data. This is despite the fact that the components of specific foods have been published for over 150 years. Over time food composition data have assumed more scientific, academic, and political importance owing to their utility. Refer to Table 11.1 for practical examples of the uses of food composi-tion data. It was only in 1961 that a regional food composition table was developed and published for Latin America, followed by a food composition table for Africa (1968), the Near East (1970), and Asia (1972). The data in these tables were based on a very limited number of samples, a limited number of nutrients and, in today’s terms, outdated analytical methodologies. However, these tables are still being used today as there are limited up-to-date tables avail-able. Worldwide there are currently over 150 food composition tables or nutrient databases, or their electronic/magnetic equivalents, in use. Many tables are based on the data from the United States Department of Agriculture’s (USDA) National Nutrient Database for Standard Reference, SR, available on the Nutrient Data Laboratory’s web site: www.ars.usda.gov/nutrientdata. A comprehensive list of the food composition tables available can be obtained from the Food and Agriculture Organization of the United Nations (FAO) homepage on the World Wide Web (http://www.fao.org/infoods/directory). EuroFIR, the European Food Information Resource Consortium, is a partnership between 40 universities, research institutes, and small to-medium-sized enter-prises from 25 countries in Europe. EuroFIR aims to develop and integrate a comprehensive cohort and validated network of databanks of food composition data for Europe. This network, although comprehensive, has at present limited access to the broader nutrition society. 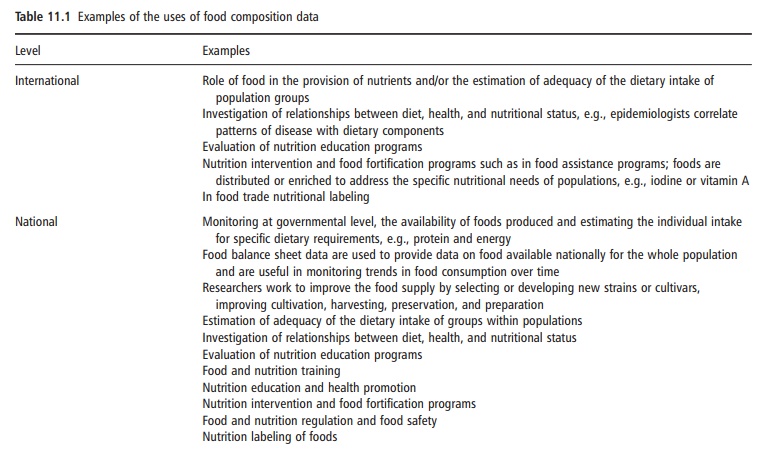 There is still a continued need to carry out food analyses as the number of foods consumed all over the world, especially unique foods, is still several times greater than the number for which analytical data exist. The recent (2008) Cross Cutting Initiative on Biodiversity for Food and Nutrition led by the FAO and Biodiversity International focused on genetic diversity within species and of underutilized, unculti-vated, and indigenous foods. The investigation has highlighted the need for composition data of foods, not only at species level, but also at subspecies level. The limited amount of composition data for under-utilized, uncultivated, and indigenous foods playing important roles in the consumption patterns in under-developed and developing countries increases this need for food composition analysis. Food analyses are also needed under the following circumstances:

●      when new foods are produced or existing foods are reformulated.