For optimum health there must be homeostasis.

For optimum health there must be homeostasis. For this to exist, the body must be in fluid and electrolyte balance. This means the water lost by healthy in-dividuals through urination, feces, perspiration, and the respiratory tract must be replaced in terms of both volume and electrolyte content. Electrolytes are measured in milliequivalents (mEq/L). An illness causing vomiting and diar-rhea can result in large losses of water and electrolytes and must be addressed quickly. Water lost through urine is known as sensible (noticeable) water loss. Insensible (unnoticed) water loss is in feces, perspiration, and respiration.

The body must excrete 500 ml of water as urine each day in order to get rid of the waste products of metabolism (Table 9-4). 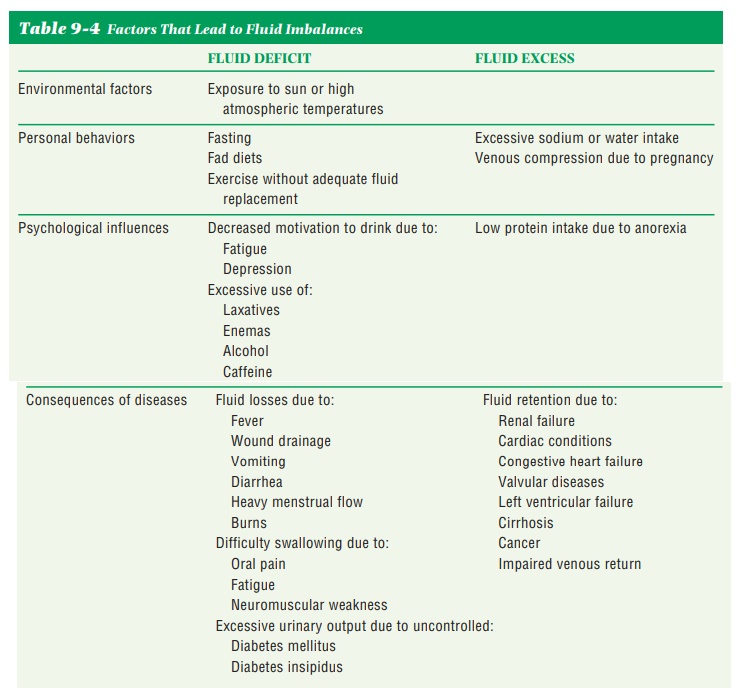 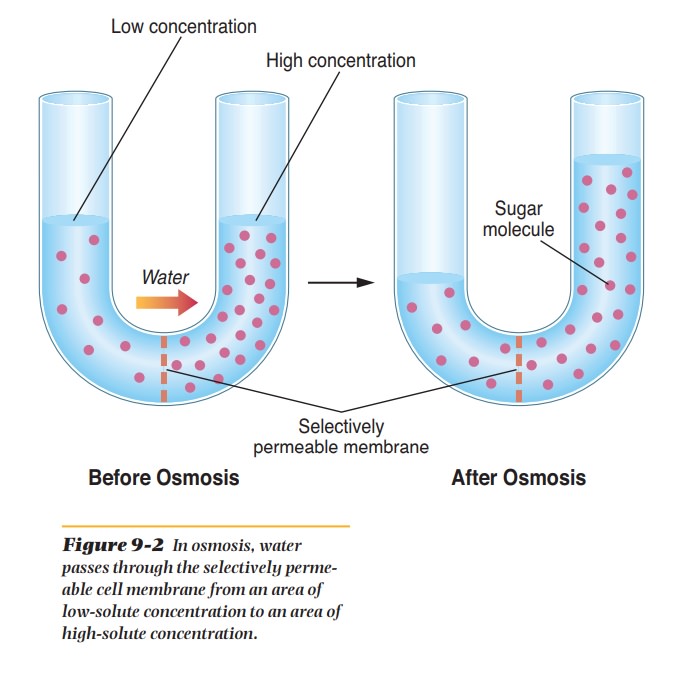 When the electrolytes in the extracellular fluid are increased, ICF moves to the ECF in an attempt to equalize the concentration of electrolytes on both sides of the membrane. This movement reduces the amount of water in the cells.

The cells of the hypothalamus (regulates appetite and thirst) then become dehy-drated, as do those in the mouth and tongue, and the body experiences thirst.The hypothalamus stimulates the pituitary gland to excrete ADH (antidiuretic hormone) whenever the electrolytes become too concentrated in the blood or whenever blood volume or blood pressure is too low. (This measurement is called vascular osmotic pressure.) The ADH causes the kidneys to reabsorb water rather than excrete it. At such times, thirst causes the healthy person to drink fluids, which provide the water and electrolytes needed by the cells.

The amount of water used and thus needed each day varies, depending on age, size, activity, environmental temperature, and physical condition. The average adult water requirement is 1 ml (milliliter) for every calorie in food consumed. For example, for every 1,800 kcal in food consumed, one needs to drink 7.5 glasses of fluid. For optimal health, it is recommended that adults drink at least thirteen 8-ounce glasses of fluid a day, preferably eight glasses of water but at least seven of water and five of other fluids. Youth, fever, diarrhea, unusual perspiration, and hyperthyroidism increase the requirement.

When the amount of water in the body is inadequate, dehydration can occur. It can be caused by inadequate intake or abnormal loss. Such loss can occur from severe diarrhea, vomiting, hemorrhage, burns, diabetes mellitus, exces-sive perspiration, excessive urination, or the use of certain medications such as diuretics. Symptoms of dehydration include low blood pressure, thirst, dry skin,fever, and mental disorientation.

As water is lost, electrolytes are also lost. Thus, treatment includes replacement of electrolytes and fluids. Electrolyte content must be checked and corrections made if necessary. A loss of 10% of body water can cause serious problems. Blood volume and nutrient absorption are reduced, and kidney function is upset. A loss of 20% of body water can cause circulatory failure anddeath. Infants, for example, are at high risk of dehydration when fever, vomit-ing, and diarrhea occur. Intravenous fluids are often necessary if sufficientfluids cannot be consumed by mouth.

The thirst sensation often lags behind the body’s need for water, especiallyin the elderly, children, athletes, and the ill. Feeling thirsty is not a reliable in-dicator of when the body needs water. Fluids should be drunk throughout theday to prevent dehydration (Figure 9-3 and Table 9-5). 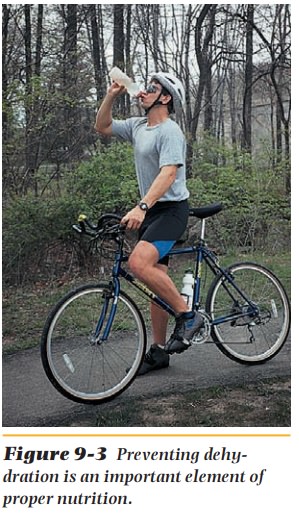 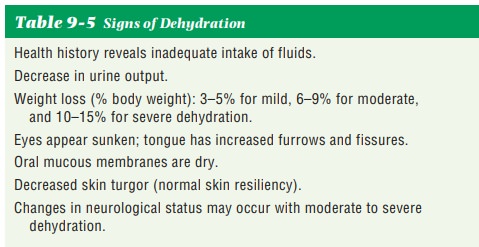 Dehydration can occur in hot weather when one perspires excessivelybut fails to drink sufficient water to replace the amount lost through perspi-ration. Failure to replace water lost through perspiration could lead to one of the four stages of heat illness or could progress through all four. The fourstages of heat illness are: (1) Heat fatigue, which causes thirst, feelings of weak-ness, or fatigue. To combat this, one should go to a cool place, rest, and drinkfluids. (2) Heat cramp, due to the loss of sodium and potassium, which causesleg cramps and thirst. One should go to a cool place, rest, and drink fluids.(3) Heat exhaustion, which causes thirst, dizziness, nausea, headache, and pro-fuse sweating. Treatment includes sponge baths with cool water, a 2- to 3-dayrest, and the ingestion of a great deal of water. (4) Heat stroke, which involvesfever and could produce brain and kidney damage. Emergency medical service(911) should be called, and the patient should be put in chilled water and transported to the hospital. People can die from heat stroke. People who are unableto perspire are at high risk for any of the stages of heat illness.

Some conditions cause an excessive accumulation of fluid in the body. This condition is called positive water balance. It occurs when more water is taken in than is used and excreted, and edema results.

Hypothyroidism, congestive heart failure, hypoproteinemia (low amounts of protein), some infections, some cancers, and some renal conditions can cause such water retention because sodium is not being excreted normally. Fluids and sodium may then be restricted. Excess water drinking is a recognized characteristic of schizo-phrenia. Also it has been reported that acute psychological stress had led to excessive water drinking that resulted in brain damage (Mukherjee et al., 2005). Those without a medical or psychological condition are not prone to excess water intake.