Boundary layer is the region near a solid where the fluid motion is affected by the solid boundary. In the bulk of the fluid the flow is usually governed by the theory of ideal fluids. By contrast, viscosity is important in the boundary layer. The division of the problem of flow past an solid object into these two parts, as suggested by Prandtl in 1904 has proved to be of fundamental importance in fluid mechanics.

It is defined as the line which gives the sum of pressure head (p/w) and datum head (z) of a flowing fluid in a pipe with respect to some reference line or it is the line which is obtained by joining the top of all vertical ordinates, showing the pressure head (p/w) of a flowing fluid in a pipe from the centre of the pipe. It is briefly written as H.G.L (Hydraulic Gradient Line).

It is defined as the line which gives the sum of pressure head, datum head and kinetic head of a flowing fluid in a pipe with respect to some reference line. It is also defined as the line which is obtained by joining the tops of all vertical ordinates showing the sum of pressure head and kinetic head from the centre of the pipe. It is briefly written as T.E.L (Total Energy Line).

For the flow of viscous fluid through circular pipe, the velocity distribution across a section, the ratio of maximum velocity to average velocity, the shear stress distribution and

drop of pressure fora given length is to be determined. The flow through circular pipe will be viscous or laminar, if the Reynold’s number is less than 2000.

.2 DEVELOPMENT OF LAMINAR AND TURBULENT FLOWS IN CIRCULAR PIPES

At the initial stage i.e, near the surface of the leading edge of the plate, the thickness of boundary layer is the small and the flow in the boundary layer is laminar though the main stream flows turbulent. So, the layer of the fluid is said to be laminar boundary layer.

This equation is called as Hargen-Poiseuille equation for laminar flow in the circular pipes.

A pipe is a closed conduit through which the fluid flows under pressure.When the fluid flows through the piping system,some of the potential energy is lost due to friction.

Moody’s diagram is plotted between various values of friction  factor(ƒ),Reynolds

number(Re) and relative roughness(R/K) as shown in figure 2.6.For any turbulent flowproblem,the values of friction factor(ƒ) can therefore be determined from Moody’s diagram,if the numerical values of R/K for the pipe and Rе of flow are known.

The Moody’s diagram has plotted from the equation 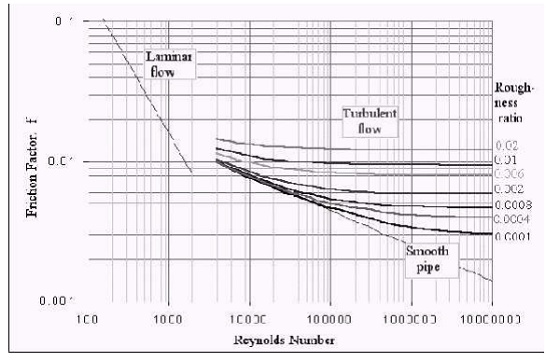 When a fluid flowing through a pipe, certain resistance is offered to the flowing fluid, it results in causing a loss of energy.

The loss is classified as:

The major loss of energy is caused by friction in pipe. It may be computed by Darcy-weisbach equation. 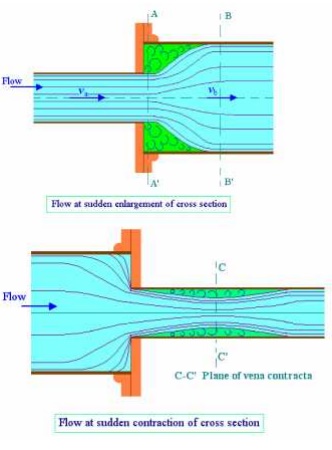 FLOW THOUGH PIPES IN SERIES AND PARALLEL

The pipes of different diamers and lengths which are connected with one another to form a single pipeline.

1.     To find out friction factor in the flow through pipe. 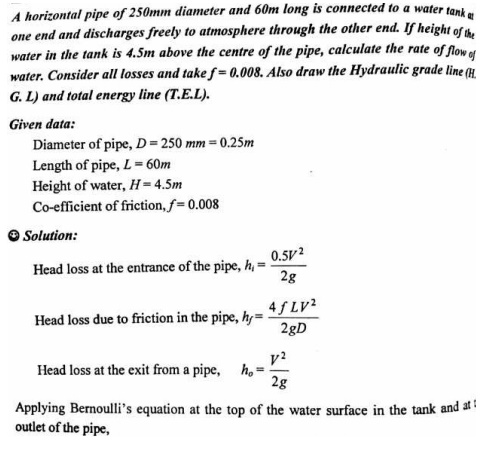 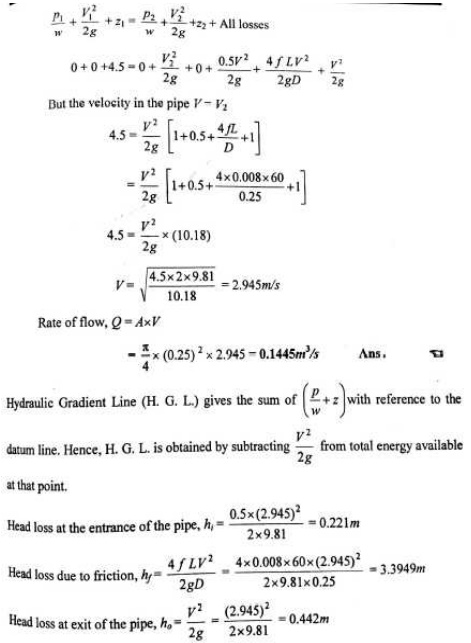 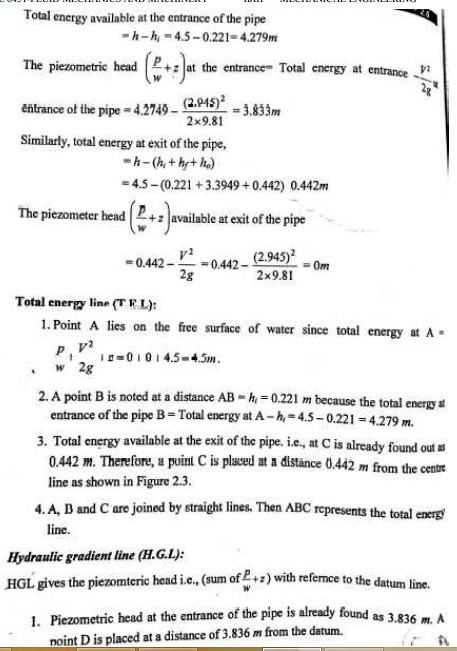 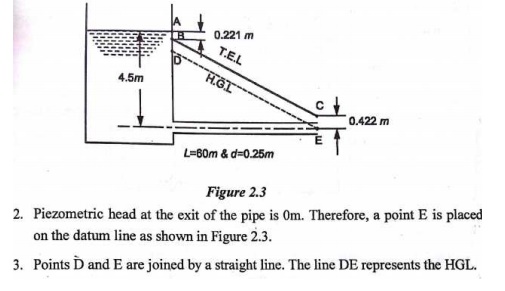 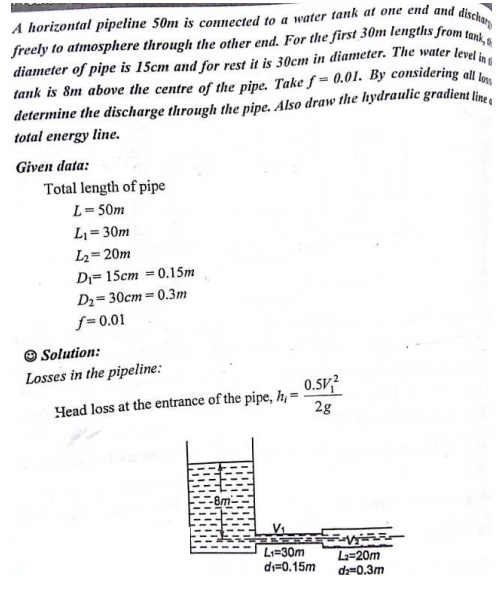 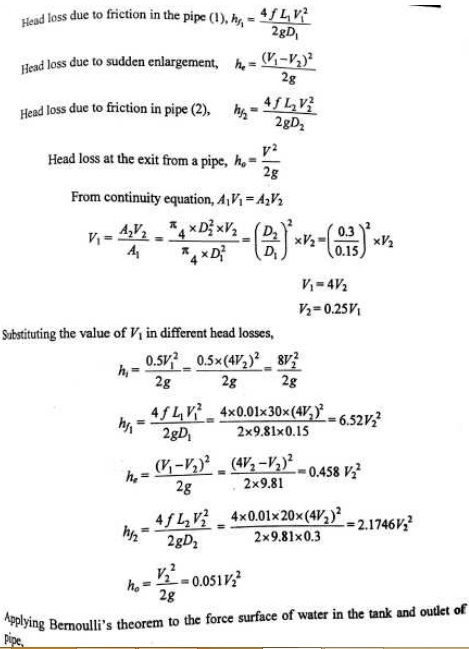 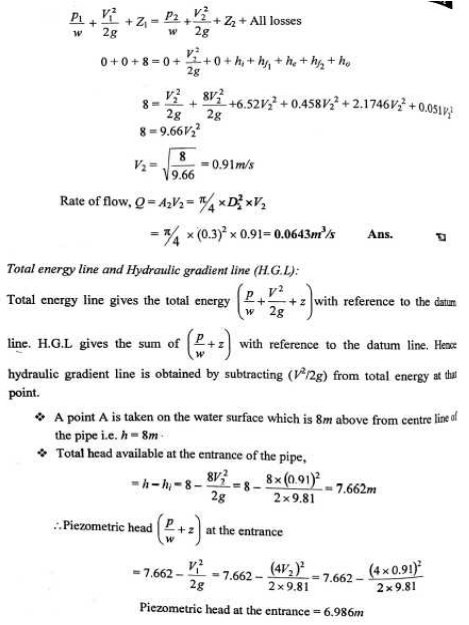 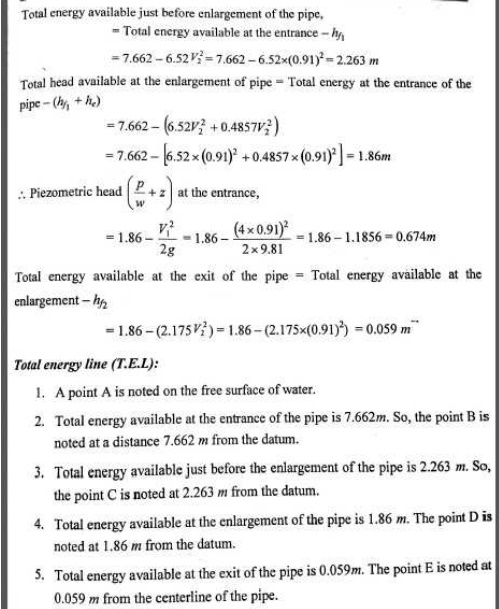 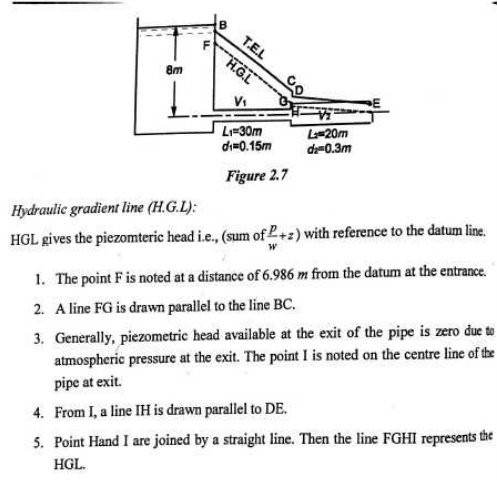 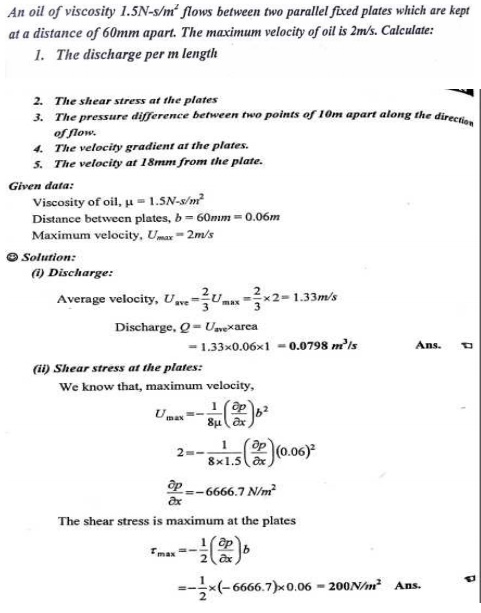 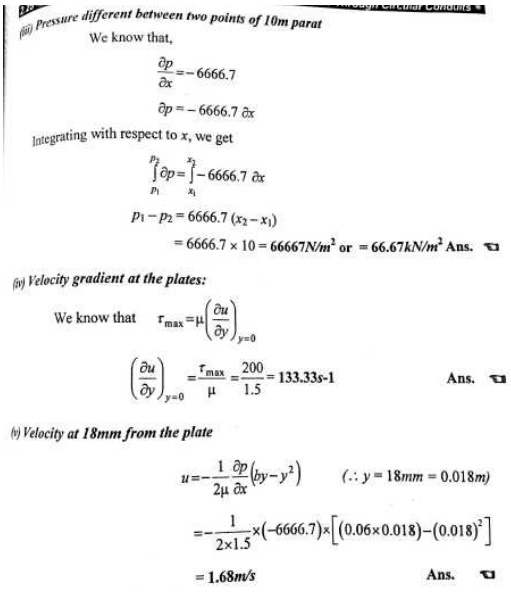 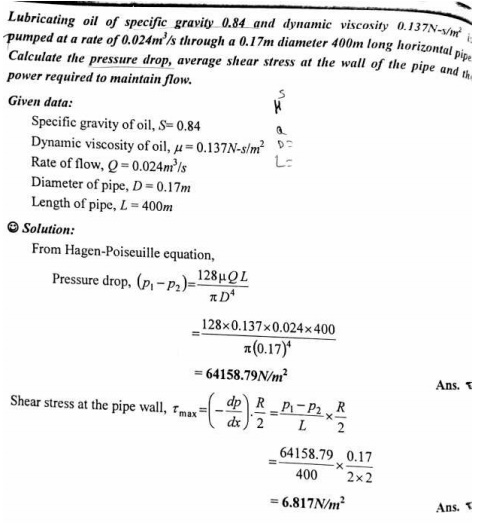 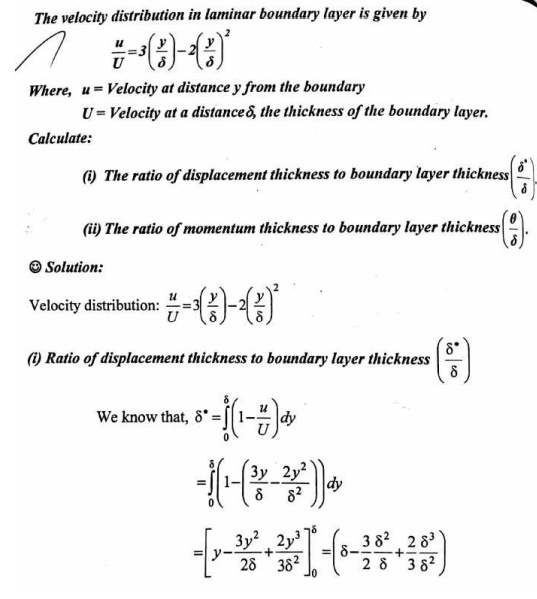 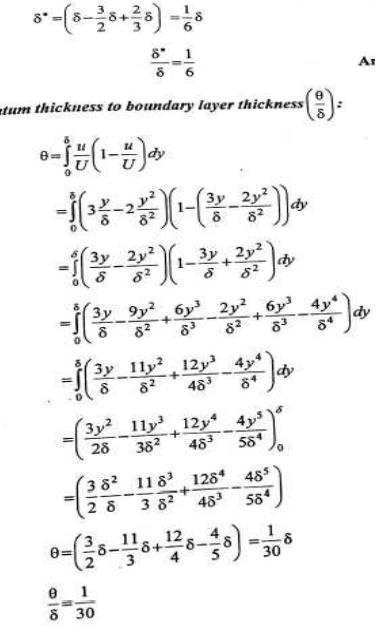 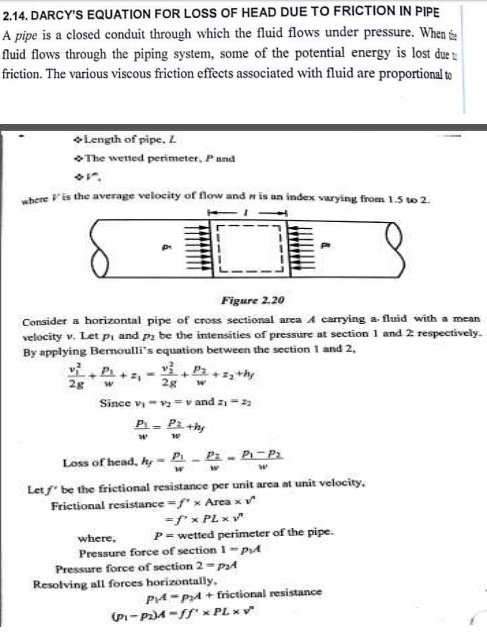 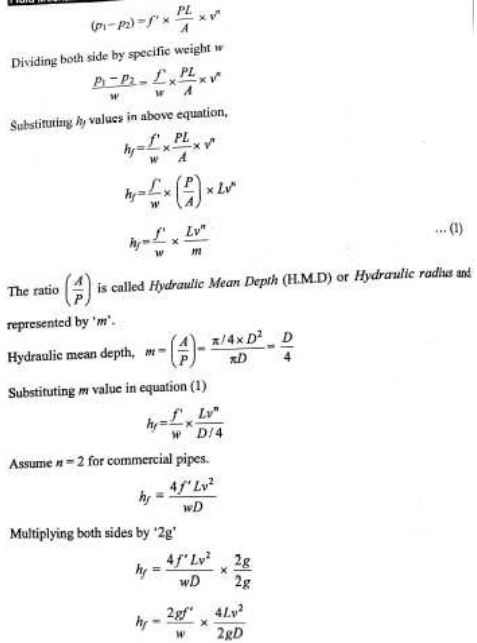 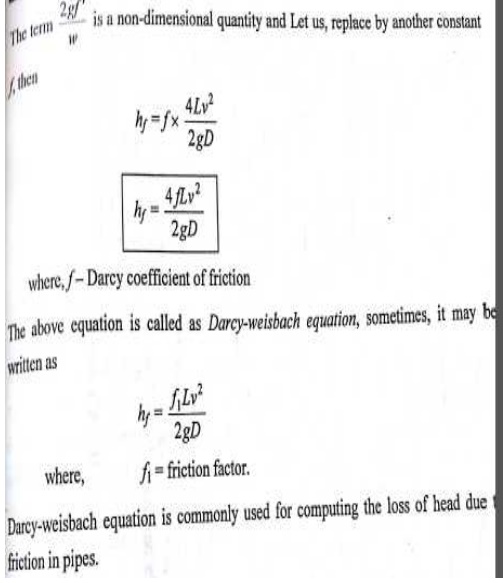 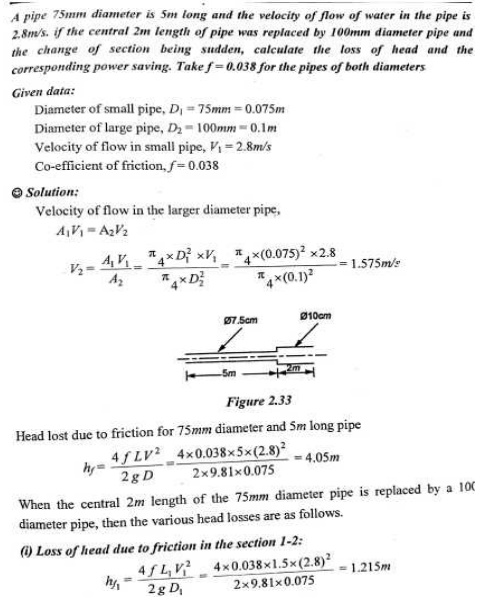