In a quantitative flow injection analysis a calibration curve is determined by injecting standard samples containing known concentrations of analyte.

Flow injection analysis has been applied to a wide variety of samples, including environmental, clinical, agricultural, industrial, and pharmaceutical samples. The majority of analyses to date involve environmental and clinical samples, which is the focus of this section.

Quantitative analytical methods using FIA have been developed for cationic, anionic, and molecular pollutants in wastewater, fresh waters, groundwaters, and marine waters, several examples of which were described in the previous section. Table 13.2 provides a partial listing of other analytes that have been determined using FIA, many of which are modifications of conventional standard spectropho- tometric and potentiometric methods. An additional advantage of FIA for environ- mental analysis is its ability to provide for the continuous, in situ monitoring of pollutants in the field. 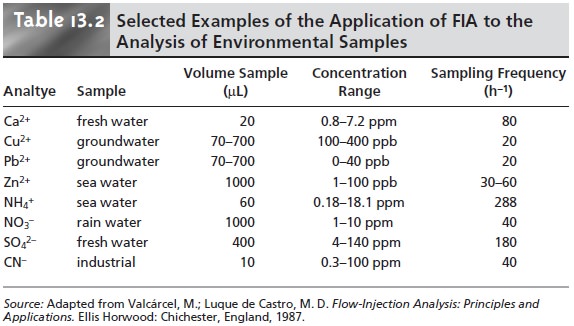 As noted, several standard methods for the analysis of water in- volve acid–base, complexation, or redox titrations. Flow injection analysis also can be used for rapidly conducting such titrations using a single-channel manifold simi- lar to that shown in Figure 13.21. A solution, consisting of a titrant (the concen- tration of which is stoichiometrically less than that of the analyte) and an indicator, is placed in the reservoir and continuously pumped through the system. When a sample is injected, it thoroughly mixes with the titrant in the carrier stream. The re- action between the analyte, which is in excess, and the titrant produces a relatively broad flow profile for the sample. As the sample moves toward the detector, addi- tional mixing occurs. Due to the continued reaction between titrant and analyte, the analyte’s concentration decreases, and the width of its flow profile also de- creases. As the sample passes through the detector, the width of its flow profile, ∆t, is determined by monitoring the indicator’s absorbance (Figure 13.26). Solutions  with higher initial concentrations of analyte have a greater ∆t. Calibration curves of ∆t versus log [analyte] are prepared using standard solutions of analyte . 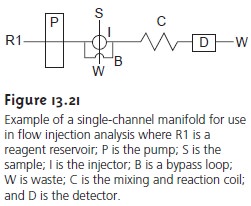 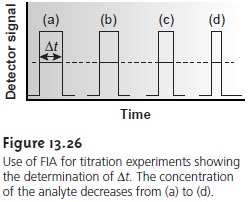 Flow injection analysis has also found numerous applications in the analysis of clinical samples, using both enzymatic and nonenzymatic methods. A list of selected examples is given in Table 13.3.

Although each FIA method has its own unique considera- tions, the determination of phosphate described in the following method provides an instructive example of a typical procedure.