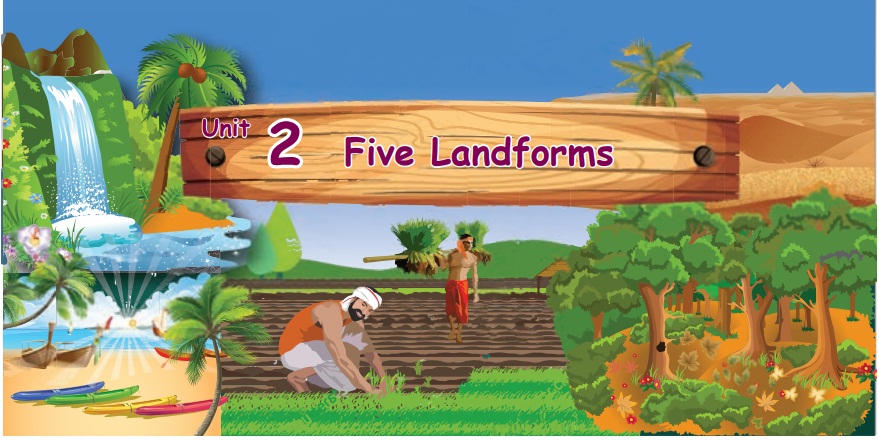 ● To know about different types of landforms in ancient Tamil Nadu.

● To know about the themes of classiﬁcation.

● To understand the life style of people in different landforms of Tamil Nadu.

● What is the name of your native place?

● In which district is your native place situated?

● What do you see around your house?

We see ﬁelds, houses, trees, stones and dry lands around our house. We see more things like this in our Earth.

1. Where would you see more hills on the Earth? Mountains

2. Where would you see wild animals with more trees? Forest

3. Where does the paddy grow? Agricultural land

4. Where would you see the Sea shore? Sea, Beach

5. What is the name of useless lands? Fallow land

The places we see on the surface of the Earth is called landforms.

Now let us see how the land was divided into different types in ancient Tamil Nadu according to its fertility and people's activities.

In the Solar family, Earth is the third planet. It has oxygen and temperature to live. Therefore we call the Earth as Biosphere. 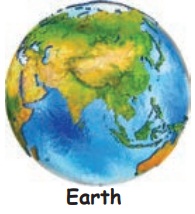 The Earth or the life sphere is surrounded by ﬁve elements of nature called land, water, air, ﬁre and sky. 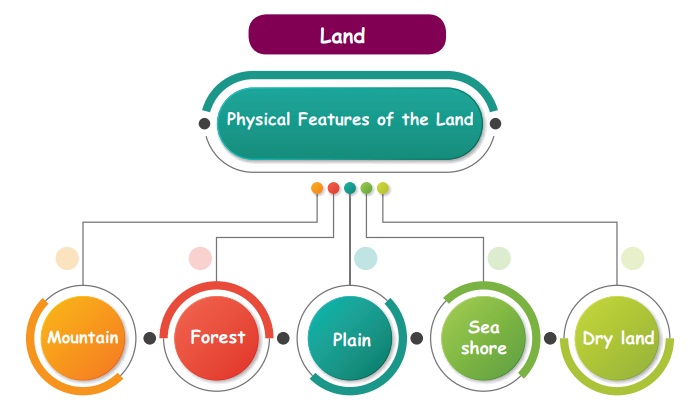 ● The ﬁve types of landforms in Sangam age were divided on the basis of the work done by the people.

● Out of the ﬁve thinais, only four types were permanent. They were Kurinji, Mullai, Marutham and Neithal. The ﬁfth land Palai was formed when Kurinji and Mullai dried up.

A mountain is a large geographical area that rises above the surrounding land with peaks.

The mountain and its surroundings are known as Kurinji land. 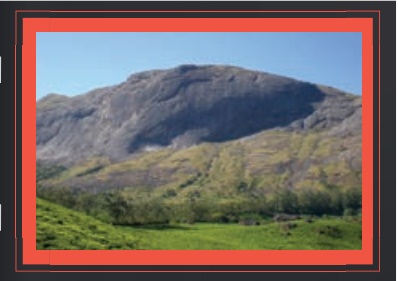 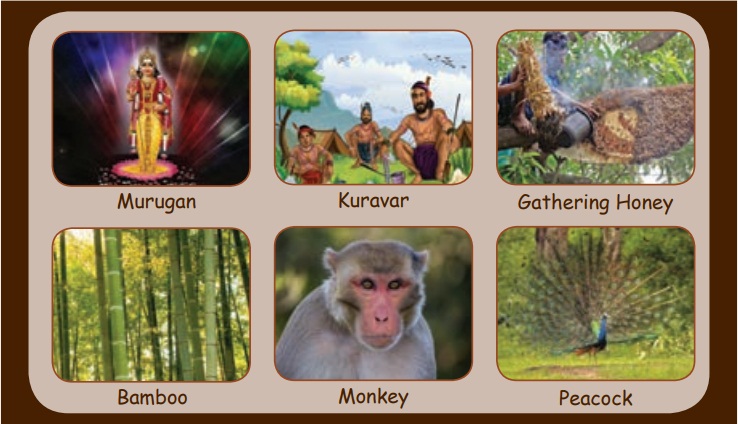 ● Verpan – Leader of the tribe, Weaponists

● Silamban – Master of martial arts (The arts of fighting) .

● Kuravar – Hunter and the Gatherer.

● Kanavar – People of the mountainous forest.

3. The Soil of Kurinji Land

● The land of Kurinji was composed of red and black soils with stones and pebbles.

Some important hills of Tamil Nadu 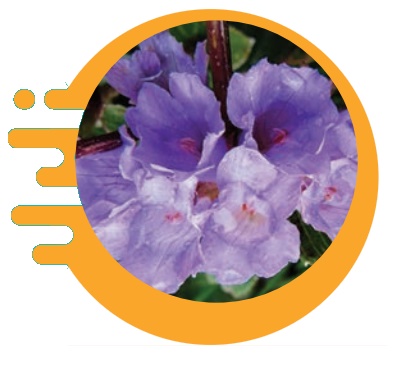 The miraculous Kurinji flower grows once in twelve years. The ﬂower grows well in the Western Ghats. It ﬂowers in the month of July to September. This ﬂower has medicinal value.

A large area covered by trees is called forest.

The forest region is referred as Mullai land. This region is also called 'Sembulam' due to the presence of red soil. 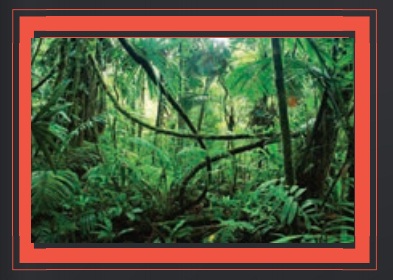 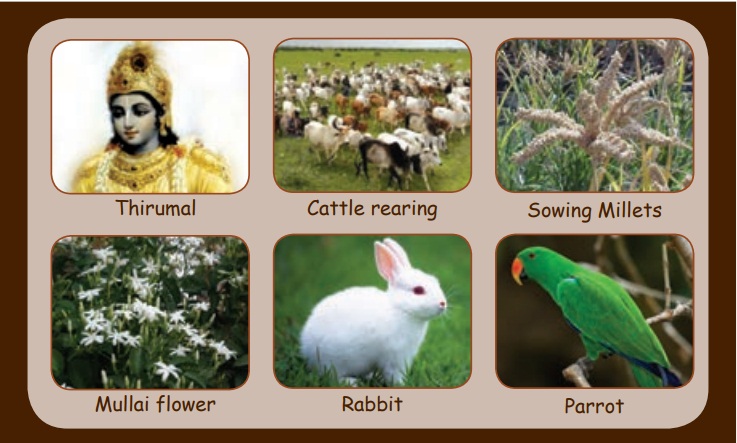 3. The Soil of Mullai land

● The land of Mullai has red soil with stones and pebbles. 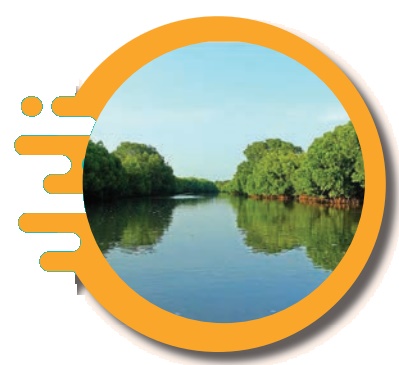 Pichavaram is a village near Chidambaram in Cuddalore district of Tamil Nadu, which is the second biggest mangrove forest in India. It comprises of small vegetation, aquatic animals etc. with moist temperature.

The vast ﬂat land on the Earth is called plain. The crop ﬁelds and their surroundings were known as Marutham. (The agricultural land and the area around it). 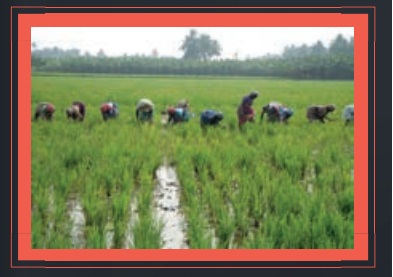 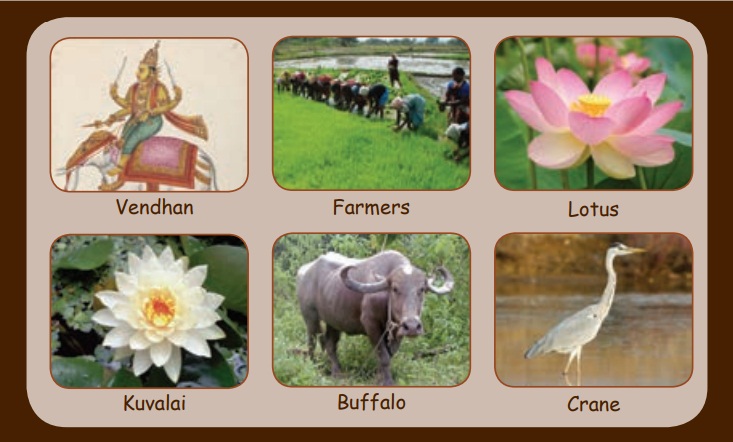 3. The Soil of Marutham land

● The land of Marutham is formed of alluvial soil and red soil. 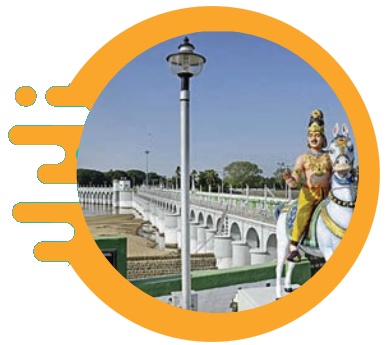 Kallanai is an ancient dam, which is built across the Cauvery river in Thanjavur district in Tamil Nadu. Its length is 1,080 ft, width 66 ft and height 18 ft. It is the fourth oldest water diversion system for irrigation in the world.

The salty water body that covers a large part of the surface of the Earth is called sea.

The Sea and the area around the sea is called 'Neithal'. 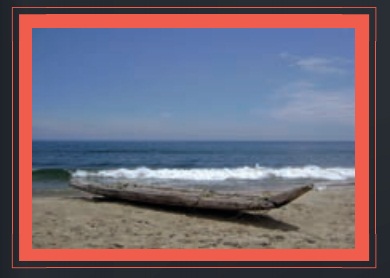 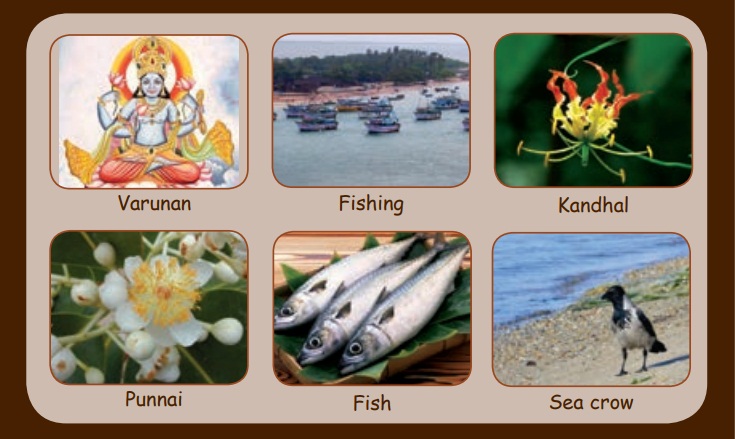 ● Pulamban - Who thrive on coconut.

3. The Soil of Neithal land

● The land of Neithal is made of saline soil. 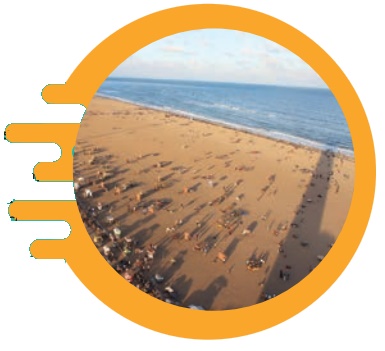 Marina beach is a natural urban beach in Chennai, Tamil Nadu . It is the second longest beach in the world. The beach is situated in the eastern side of India along Bay of Bengal. The beach runs from Fort St. George in the north to Foreshore Estate in the south, The total distance of beach is 13 km.

( The ﬁrst longest beach is Miyami beach, which is situated at Florida, America.)

A dry region with less or without rainfall is called a dry land.

The sandy land, which under-goesdrought is called Palai.

When Kurinji and Mullai dries up, it is called Palai. 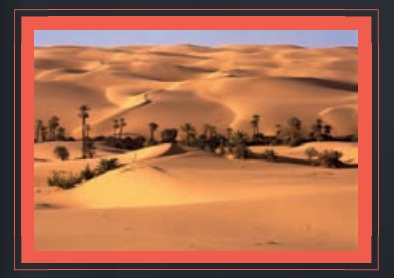 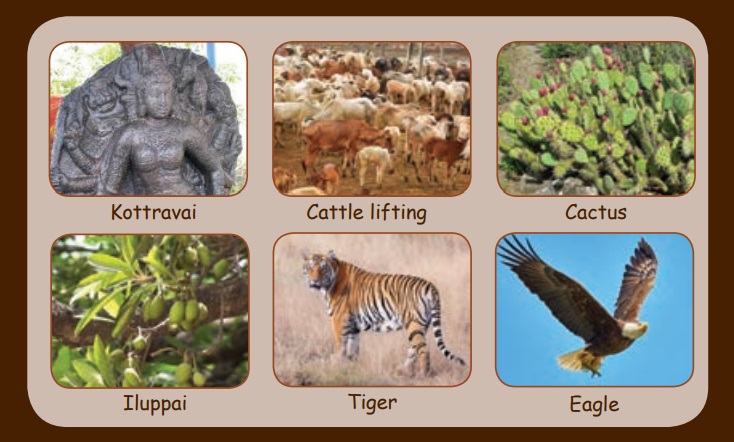 3. The Soil of Palai land

The land of Palai is sandy and saline.

1. With help of your teacher visit a nearby mountainous region and collect the herbs and know their uses.

2. "Trees are our friends". Do you accept? Discuss with group.