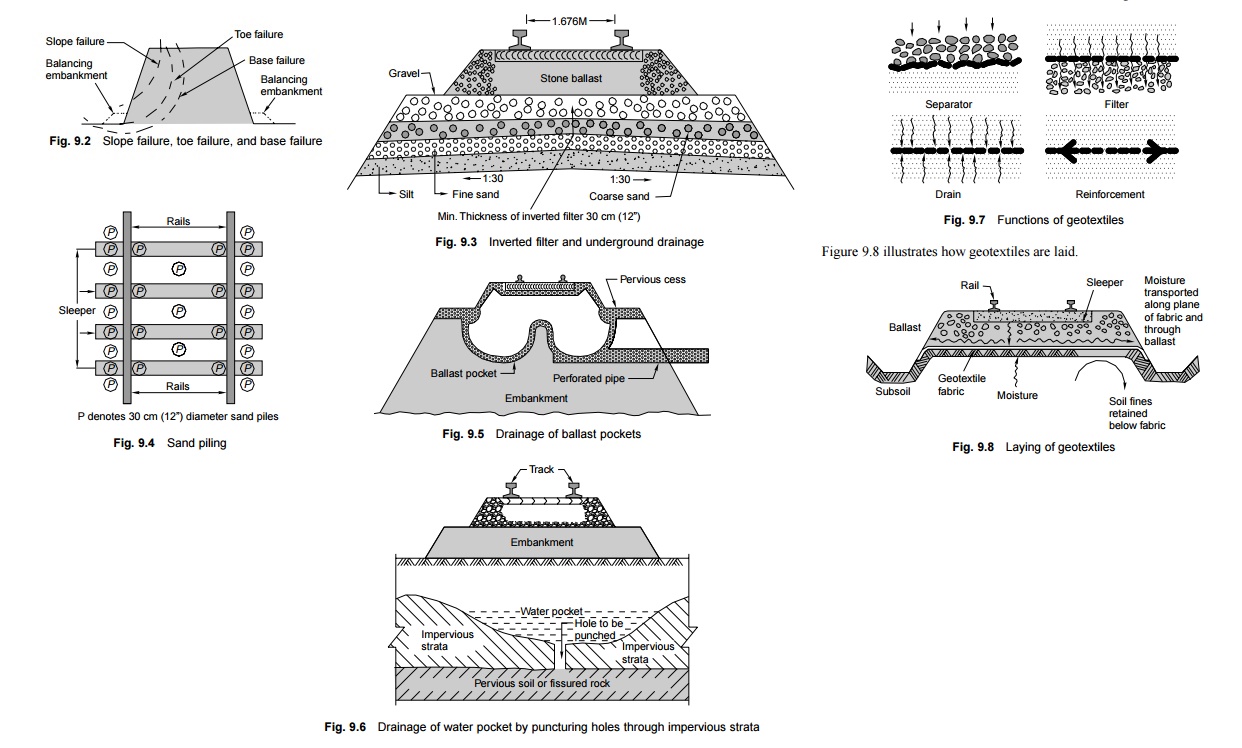 A railway embankment may fail due to the following causes.

(a)  Failure of the natural ground

(b) Failure of the fill material in the embankment

(c)  Failure of the formation top

Whatever may be the cause of failure, the normal symptoms are the following.

(a)  Variation in cross levels

(b) Loss of ballast

(c)  Upheaval of the ground beyond the toes of the embankment

These failures are discussed in the subsequent sections.

The natural ground on which the embankment is made can fail either due to shear failure or due to excessive settlement. Failure of this kind is generally associated with the upheaval of the ground beyond the toes of the embankment. Shear failure of natural ground generally takes place when construction is in progress or immediately after construction. Once the ground stabilizes, it hardly fails under existing embankments.

The following remedial measures are generally adopted to improve the load-carrying capacity of natural ground and hasten the process of settlement.

(a)  Provision of suitably spaced sheet or ordinary piles on either side of the embankment, which will check shear failure by obstructing the slipping mass.

(b) Provision of a balancing embankment to increase the load on the natural ground to check its heaving tendency.

2 Failure of the Fill Material of Embankments

(a)  Heavy traffic causing excessive stress in the soil, beyond its safe limit

(b) Inadequate side slopes of the bank

(c)  Percolation of water in the embankment, thereby increasing the weight of the soil on one hand and reducing its bearing capacity and shear resistance on the other. Shear failure of existing embankments is quite common and occurs due to slips. Other causes of failure are the weights of the embankment and the moving loads on it. The forces resisting the failure are the cohesion

and internal friction of the fill material.

The following types of slip failures may occur along different planes, as shown in Fig. 9.2.

l    A slip passing through the toe of the bank known as toe failure.

l    A slip passing below the toe of the bank through its base known as base failure.

l    A slip passing above the toe of the bank through its slope known as slope failure.

The remedies effective for such failures are listed below.

(a)  Providing vertical piles on the slope on either side of the track, spaced at suitable intervals. These piles, which may be of scrap rail, bullies, etc., help check shear failure by causing an obstruction for the slip mass. This method was adopted on Ganga Bridge, Mokameh, and was found to be quite successful.

(b) Providing balancing embankments on either side of the embankment as shown in Fig. 9.2.

(c)  Flattening the side slopes.

(d) Reducing the height of the embankment.

(e)  Providing a lighter material at the top of the embankment, replacing the older material.

Failure of the formation top is very common in clayey soils during or just after monsoons. Some locations may trouble throughout the year. The main causes for such failures are the following.

Low bearing capacity of the soil Sinking of the ballast and the track, and the heaving up of cesses and bulging of side slopes as a consequence. The ballast punches into the formation causing ballast pockets.

Action of water and moving loads The top soil becomes soft and gets pumped up resulting in the sinking of the ballast. The ballast also gets clogged and looses its drainage property.

The impact of moving loads and the development of hydrostatic pressure further deepens the ballast on the side slopes as well and can lead to slips in extreme cases. These failures present considerable problems in the maintenance of the track. Not only is the track geometry affected thereby requiring frequent attention, but also huge quantities of ballast are lost every year, making its maintenance difficult and expensive.

The following remedial measures can be adopted depending upon the situation.

Provision of an inverted filter

(b) The blanketing material should have such a grain size that the fine soil from the bottom does not mix up with the water. The material should, therefore, conform to the specifications of an inverted filter. 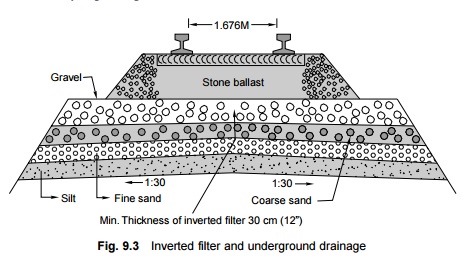 (c)  The blanketing material should be well graded, starting from a fine size to a size slightly smaller than stone ballast, the finer size lying at the bottom.

The inverted filter blanket is a very effective method of improving the bearing capacity of the soil. It serves as a barrier for the upward movement of the clay. It also provides a porous medium to drain off the surface water. The blanket also works as a capillary cut-off layer. The blanket can be inserted by imposing a traffic block of 4-5 hours or by temporarily operating only one line.

For cement grouting, a slurry or grout of cement and sand is pumped into the embankment by pneumatic injections. A 25-mm-diameter steel pipe is coupled with a rubber hose pipe of the same diameter, and through this grout of cement and sand in the ratio of 1:2 to 1:6 is injected under a pressure of 60 psi with the help of a pneumatic hammer. The injection points are kept close to both ends of the sleeper in a staggered position at an interval of 1.5 m or so. Pumping is continued till the grout appears through the ballast and reaches its top surface.

Cement grouting is considered to be a very effective method of treating the subgrade. It fills the cracks, preventing the water from flowing into the subgrade, and seals off the moisture entering into it. The soil is stabilized and develops better properties and strength.

In sand piling (Fig. 9.4), a series of 30-cm-diameter holes are drilled vertically inside and outside the rail to a depth of 2-3 m by means of augers or other devices. The holes are then filled up with clean sand and the track is resurfaced (Fig. 9.4). The sand piles are so arranged that the cross-sectional area of the sand piles is about 20% of the formation area. Sand piles compact the soil and provide mechanical support to the subgrade just like wooden piles. The drainage of the subgrade also improves, as water rises to the surface through the sand piles by capillary action and evaporates. 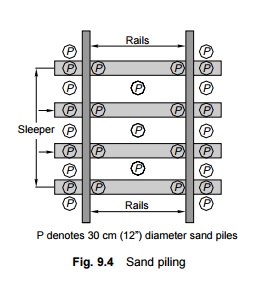 Deep screening of ballast and drainage of water pockets

The problem of ballast pockets can be tackled by assessing the depth of the penetration of the ballast in the bank. For this purpose, about five vertical trial bores are drilled to get a complete picture of the drainage condition of the sub-surface structure. Water pockets can then be removed by any of the following methods, depending upon the situation.

(a)  If the problem has just started, it can be remedied by deep screening and the provision of a pervious layer of 30-60 cm on the cess. If necessary, the water pockets can be drained using a perforated pipe drain inserted with the help of a jack, as shown in Fig. 9.5.

(b) Cement grouting can also be done to seal the water pockets in case the problem is in a very small stretch. This method is, however, very expensive.

(c)  If the problem is extensive, a geological survey should be done to assess the type of soil strata available. In case there is impervious soil under the water pocket, it can be drained out using a perforated pipe (Fig. 9.5)-deep screening of the ballast is done, the water pockets are drained out using a perforated pipe, and then an inverted filter of about 30 cm thickness is provided.

(d) Counterfeit drains are sometimes provided to drain the water pockets. Such drains are generally 60 cm wide and spaced at intervals of 10 m or so, depending upon the extent of the problem. 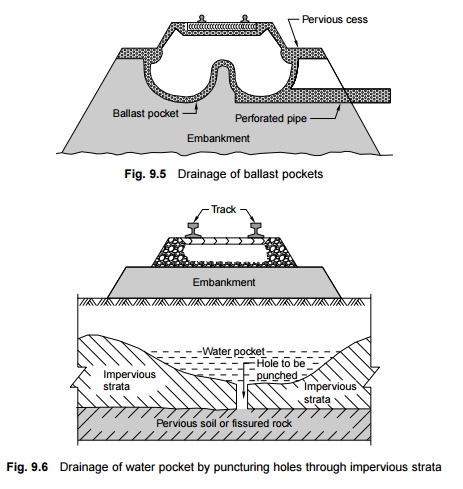 A new method of stabilization of soil using geotextiles has recently been developed in many countries. Geotextiles are made up of polymers and have the unique property of allowing water, but not soil fines, to pass through. Geotextiles not only work as separators and filters but also help drain the water and provide reinforcement to the soil bed (Fig. 9.7). 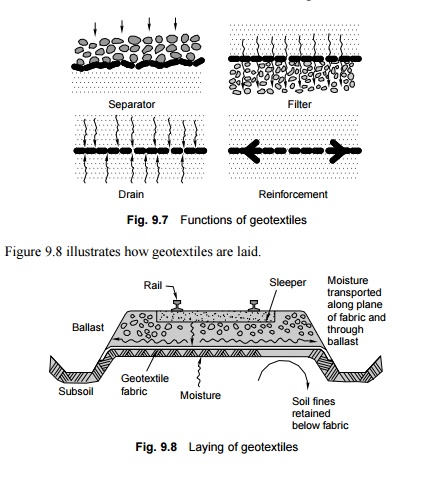