It is important to understand the expected voltage sag performance of the supply system so that facilities can be designed and equipment specifications developed to assure the optimum operation of production facilities. The following is a general procedure for working with industrial customers to assure compatibility between the supply system characteristics and the facility operation:

ü   Determine the number and characteristics of voltage sags that result from transmission system faults.

ü   Evaluate the economics of different solutions that could improve the performance, either on the supply system or within the customer facility.

The concept of an area of vulnerability has been developed to help evaluate the likelihood of sensitive equipment being subjected to voltage lower than its minimum voltage sag ride-through capability.5 The latter term is defined as the minimum voltage magnitude a piece of equipment can withstand or tolerate without misoperation or failure. This is also known as the equipment voltage sag immunity or susceptibility limit. An area of vulnerability is determined by the total circuit miles of exposure to faults that can cause voltage magnitudes at an end-user facility to drop below the equipment minimum voltage sag ride-through capability. Figure 2.5 shows an example of an area of vulnerability diagram for motor contactor and adjustable-speed-drive loads at an end-user facility served from the distribution system. The loads will be subject to faults on both the transmission system and the distribution system. 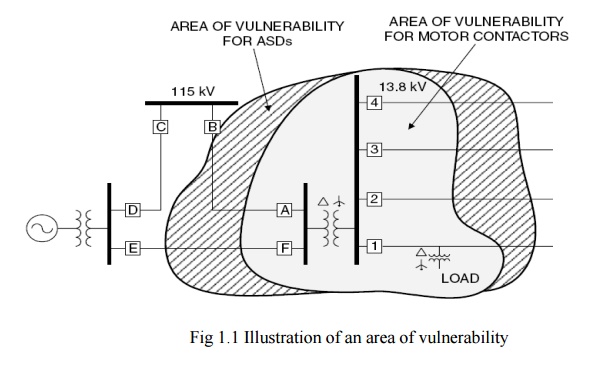 sags can be divided into three categories:

1.     Equipment sensitive to only the magnitude of a voltage sag.

2.     Equipment sensitive to both the magnitude and duration of a voltage sag.

3.     Equipment sensitive to characteristics other than magnitude and duration.

3.1. Equipment sensitive to only the magnitude of a voltage sag:

This group includes devices such as under voltage relays, process controls,

motor drive controls, and many types of automated machines (e.g., semiconductor manufacturing equipment). Devices in this group are sensitive to the minimum (or maximum) voltage magnitude experienced during a sag (or swell). The duration of the disturbance is usually of secondary importance for these devices.

3.2. Equipment sensitive to both the magnitude and duration of a voltage sag:

This group includes virtually all equipment that uses electronic power supplies. Such equipment misoperates or fails when the power supply output voltage drops below specified values. Thus, the important characteristic for this type of equipment is the duration

that the rms voltage is below a specified threshold at which the equipment trips.

3.3. Equipment sensitive to characteristics other than magnitude and duration:

Some devices are affected by other sag characteristics such as the phase unbalance during the sag event, the point-in-the wave at which the sag is initiated, or any transient oscillations occurring during the disturbance. These characteristics are more subtle than magnitude and duration, and their impacts are much more difficult to generalize. As a result, the rms variation performance indices defined here are focused on the more common magnitude and duration characteristics.

For end users with sensitive processes, the voltage sag ride-through capability is usually the most important characteristic to consider. These loads can generally be impacted by very short duration events, and virtually all voltage sag conditions last at least 4 or 5 cycles (unless the fault is cleared by a current-limiting fuse). Thus, one of the most common methods to quantify equipment susceptibility to voltage sags is using a magnitude-duration plot as shown in Fig. 2.6. It shows the voltage sag magnitude that will cause equipment to misoperate as a function of the sag duration.

The curve labeled CBEMA represents typical equipment sensitivity characteristics. The curve was developed by the CBEMA and was adopted in IEEE 446 (Orange Book). Since the association reorganized in 1994 and was subsequently renamed the Information Technology Industry Council (ITI), the CBEMA curve was also updated and renamed the ITI curve. Typical loads will likely trip off when the voltage is below the CBEMA, or ITI, curve.

The area of vulnerability for motor contactors shown in Fig. 2.5 indicates that faults within this area will cause the end-user voltage todrop below 0.5 pu. Motor contactors having a minimum voltage sagride-through capability of 0.5 pu would have tripped out when a fault causing a voltage sag with duration of more than 1 cycle occurs within the area of vulnerability.

However, faults outside this area will not cause the voltage to drop below 0.5 pu.

Transmission line faults and the subsequent opening of the protective devices rarely cause an interruption for any customer because of the interconnected nature of most modern-day transmission networks. These faults do, however, causes voltage sags. Depending on the equipment sensitivity, the unit may trip off, resulting in substantial monetary losses.

ASPEN (Advanced System for Power Engineering) programs can calculate the voltage throughout the system resulting from fault around the system. It is also calculate the area of vulnerability in the specific location.

Customers that are supplied at distribution voltage levels are impacted by faults on both the transmission system and the distribution system. The analysis at the distribution level must also include momentary interruptions caused by the operation of protective devices to clear the faults.

Figure 2.2 shows a typical distribution system with multiple feeders and fused branches, and protective devices. The utility protection scheme plays an important role in the voltage sag and momentary interruption performance. The critical information needed to compute voltage sag performance can be summarized as follows:

Ø   Number of feeders supplied from the substation.

Ø   Short-circuit equivalent reactance at the substation.

They are two possible locations for faults on the distributed system (i.e) On the same feeder and on parallel feeder.