Establishment of Political Power by the English East India Company

Alivardi Khan, the Nawab of Bengal died in 1756 and his grandson Siraj-ud-daula ascended the throne of Bengal. The British taking advantage of the New Nawab’s weakness and unpopularity seized power.

Establishment of Political Power by the English East India Company

Alivardi Khan, the Nawab of Bengal died in 1756 and his grandson Siraj-ud-daula ascended the throne of Bengal. The British taking advantage of the New Nawab’s weakness and unpopularity seized power. So, Siraj -ud-daulah decided to teach them (British) a lesson by attacking over their political settlement of Calcutta. The Nawab captured their factory at Kasimbazar. On 20th June 1756, Fort William surrendered but Robert Clive recovered Calcutta.

There was a small dungeon room in the Fort William in Calcutta, where troops of the Nawab of Bengal Siraj-ud-daula, held 146 British Pris-oners of war for one night. Next day morning, when the door was opened 123 of the prisoners found dead because of suffocation.

On 9th February 1757, Treaty of Alinagar was signed, where by Siraj-ud-daulah conceded practically all his claims. British then captured Chandranagore, the French settlement, on March 1757. The battle of Plassey took place between the British East India Company and the Nawab of Bengal and his French allies. 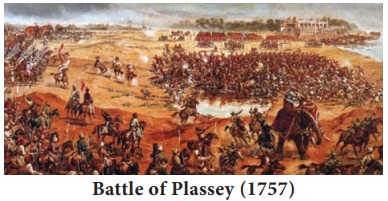 It was fought on 23 June 1757. The English East India Company’s forces under Robert Clive defeated the forces of Siraj-ud-daulah. After the collapse of Bengal, the company gained a huge amount of wealth from the treasury of Bengal and used it to strengthen its military force. The beginning of the British political sway over India may be traced from the Battle of Plassey. It was the most decisive battle that marked the initiation of British rule in India for the next two centuries. 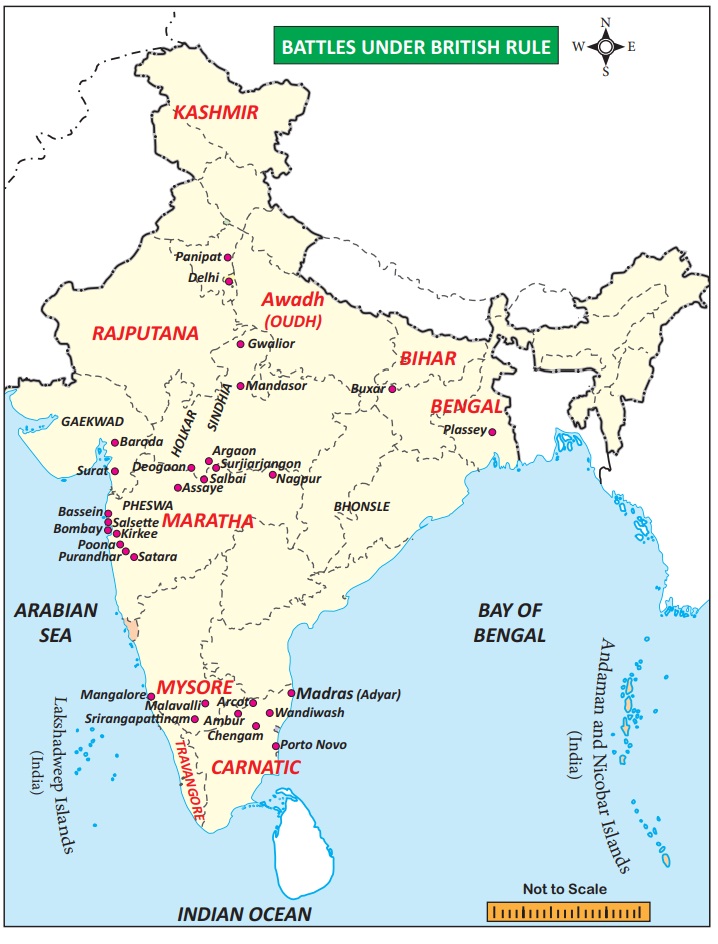 After the Battle of Plassey in 1757, the company was granted undisputed right to have free trade in Bengal, Bihar and Orissa. It received the place of 24 parganas in Bengal. Mir Jafar (1757 to 1760) the Nawab of Bengal however fell into arrears and was forced to abdicate in favor of his son in law, Mir Qasim.

Mir Qasim ceded Burdwan, Midnapore and Chittagong. He shifted his capital from Mursidabad to Monghyr. Mir Qasim soon revolted as he was angry with the British for misusing the destakes (free duty passes). However, having been defeated by the British, he fled to Awadh, where he formed a confederacy with Shuja-ud-daulah and Shah Alam. 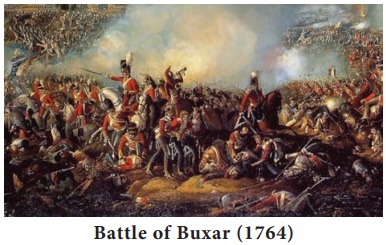 The Battle was fought on October 22, 1764 at Buxar, a “small fortified town” within the territory of Bihar, located on the banks of the Ganges river about 130 kilometers west of Patna. It was a decisive victory for the British East India Company. Shuja–ud-daulah, Shah Alam and Mir Qasim were defeated by General Hector Munro. Mir Jafar was again placed on the throne. On Mir Jafar’s death, his son Nizam-ud- daulah was placed on the throne and signed Allahabad Treaty on 20th February 1765 by which the Nawab had to disband most of his army and to administer Bengal through a Deputy Subedar nominated by the company. Robert Clive concluded two separate treaties with Shuja-ud-daula and Shah Alam II. Dual System of government started in Bengal.