A primary survey fieldwork consists of measuring horizontal and vertical angles or directions and extending straight lines. The instruments that can perform these functions have additional refinements (built-in) that can be used for other survey operations, such as leveling. Two types of instruments that fall into this category are the engineer'stransitand the theodolite. In recent years, manufacturing improvements have permitted construction of direct-reading theodolites that are soon to replace the vernier-reading transits. However, in most SEABEE construction, the engineer'ssit tranisstillthe major surveying instrument. 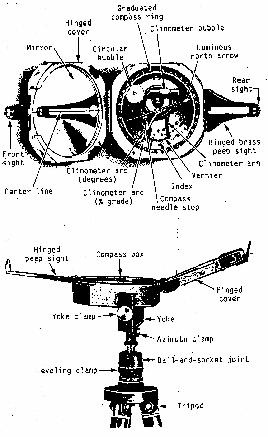 The transit (fig. 11-6) is often called the universal survey instrument because of its uses. It may be used for measuring horizontal angles and directions, vertical angles, and differences in elevations; for prolonging straight lines; and for measuring distances by stadia. Although transits of various manufacturers differ in appearance, they are alike in their essential parts and operations.

The engineer'stransitcontains several hundred parts. For-descriptive purposes, these parts may be grouped into three assemblies: the leveling head assembly, the lower plate assembly, and the upper many plate or alidade assembly (fig. 11-7).

The leveling head of the transit normally is the four-screw type, constructed so the instrument can be shifted on the foot plate for centering over a marked point on the ground. 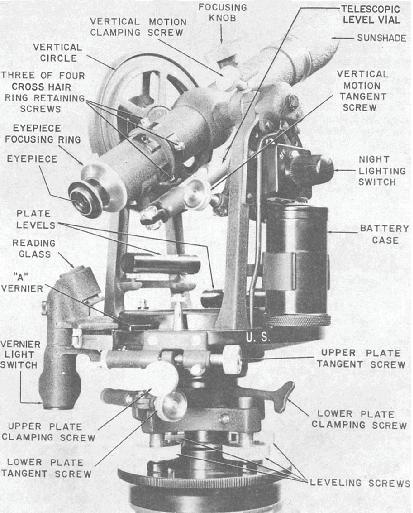 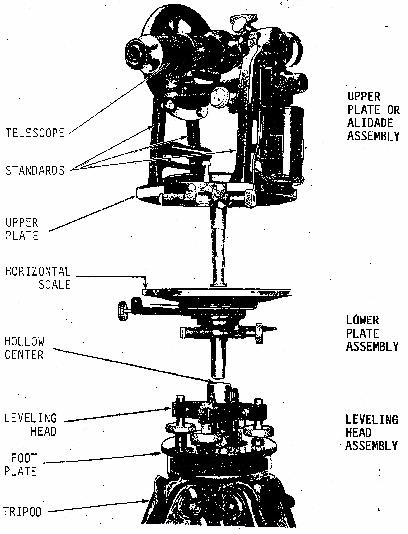 center of a circular plate and accurately fitted the socket in the leveling head. The lower plate contains the graduated horizontal circle on which the values of horizontal angles are read with the aid of two verniers, A and B, set on the opposite sides of the circle. A clamp controls the rotation of the lower plate and provides a means for locking it in place. A slow-motion tangent screw is used to rotate the lower plate a small amount to relative to the leveling head. The rotation accomplished by the use of the lower clamp and tangent screw is known as the LOWER MOTION.

The upper plate, alidade, or vernier assembly consists of a spindle attached plate to a circular plate carrying verniers, telescope standards, plate-level vials, and a magnetic compass. The spindle is accurately fitted to coincide with the socket in the lower plate spindle.

A clamp is tightened to hold the two plates together or loosened to permit the upper plate to rotate relative to the lower plate. A tangent screw permits the upper plate to be moved a small amount and is known as the UPPER MOTION.

The standards support two pivots with adjustable bearings that hold the horizontal axis and permit the telescope to move on a vertical plane. The vertical circle moves with the telescope. A clamp and tangent screw are provided to control this vertical movement. The vernier for the vertical circle is attached to the left standard. The telescope is an erecting type and magnifies the image about 18 to 25 times. The reticle contains stadia hairs in addition to the cross hairs. A magnetic compass is mounted on the upper plate between the two standards and consists of a magnetized needle pivoted on a jeweled bearing at the center of a graduated circle. A means is provided for lifting the needle off the pivot to protect the bearing when the compass is not in use.

LEVEL VIALS.- Two plate level vials (fig. 11-6) are placed at right angles to each other. On many transits, one plate level vial is mounted on the left side, attached to the standard, under the 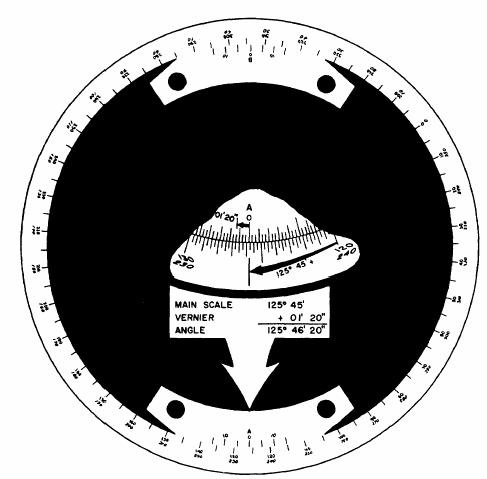 vertical circle vernier. The other vial is then parallel to the axis of rotation for the vertical motion. The sensitivity of the plate level vial bubbles is about 70 sec of movement for 2 mm of tilt. Most engineer'stransitshave a level vial mounted on the telescope to level it. The sensitivity of this bubble is about 30 sec per 2-mm t i l t.
Study Material, Lecturing Notes, Assignment, Reference, Wiki description explanation, brief detail
CiIvil Surveying : Compass and Plane Table Surveying : Engineer's Transit |