In villages, once in a week or month, all things are sold in a particular place at a specific time to meet the needs of the people. That is called ˋSandhaiˊ. The amount from the income which is left for future needs after consumption is called savings.

The laughter of children echoed throughout the children’s park of that apartment. Some slided down joyfully down the slide and some went up and down in the see – saw, shouting cheerfully. Others were swinging so high and fast, in the swings as if they were about to reach the sky. Some children were waiting near the swings to play next.

Kavin did not join with any of these children. He sat alone in a corner, staring somewhere. His uncle Mohan noticed Kavin and came near him.

“Kavin, are you going to play with your friends?” asked his uncle as he sat next to Kavin.

“Uncle, everyone teases me, calling me a villager,” said Kavin, with tears rolling down his eyes. “Even our Vimalan laughs along with them. I came here for the holidays with so much of excitement. Now, I regret my presence here. I want to go back to our village, uncle,” sobbed Kavin.

“Is it so? Where is Vimalan?” asked his uncle and started to search for his son in the crowd.

'Vimalan'... called him in loud voice. On hearing his father’s voice, Vimalan enquired, “Did you call me, dad?” and came near him.

“Did everyone tease Kavin?” asked Mohan.

“Even though I live in this big city, I also hail from the same village. My roots are still there” said his father worriedly. Then he added, “Go and bring your friends. I have to tell something to you.” Saying this, he sat near Kavin.

When Vimalan brought his friends, his father made them all sit down together. Mohan asked the children, “Let me come to the point directly. Do you know from where do we get all the food?”

“The rice and pulses we eat? We buy them from shops”, said Anandhan

“Tell me, where do the shopkeepers get these things from?”

“I guess they would buy them from another shop”.

“I think they would buy them from those who grow crops, uncle”, said Inba.

“Correct! We call those people who raise crops as farmers. Farming is the main occupation in villages”.

The children looked at each other in surprise.

“The farmers grow various crops like pulses, grains, vegetables etc., and send them to the shops in cities. We buy and consume them”.

The amount from the income which is left for future needs after consumption is called savings.

“In villages, I have seen people selling all kinds of things in a place. Why do they call it ‘Sandhai’, instead of shops?”

Imagine if money disappears one day? 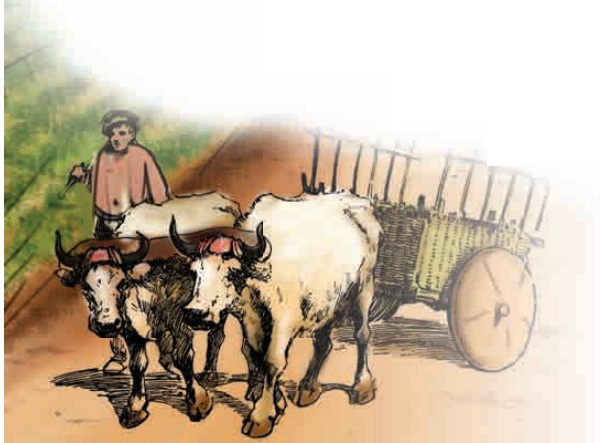 In villages, once in a week or month, all things are sold in a particular place at a specific time to meet the needs of the people. That is called ˋSandhaiˊ.

“Do you all know from where do they bring these things to Sandhai?”

“I told you already that the things which are produced in villages are brought to sandhai”.

“Fine, Kavin. Do you know what activities are carried out in a sandhai?”

“Very good Kavin. Apart from going to the sandhai with your mother, you have also noticed what’s happening around you.”

The finished goods which are bought from the market to fulfi ll the daily needs of the consumers is called consumer goods. Example: rice, clothes, bicycles, etc.

All the children said in unison, ”Without knowing the importance of villages, we teasted kavin. Forgive us, uncle, we won’t hurt anyone herafter. We wish to know more about this”.

* Plan for a model Sandhai.

* Ask the students to bring vegetables and fruits to the classroom. [One student – one vegetable/fruit].

* Ask them to display like Sandhai and stick the prices of the vegetables .

* Other class students can buy the vegetables.

* Through this activity, the students can get an experience of the value of goods, buying, selling and a knowledge of profit, loss, demand and supply.

* Probably the Sandhai should be profitable. The students learn to fix the selling price through which they can earn profit.

“Do you know in olden days we had a system of exchanging goods for other goods, called barter system. For example, exchange a bag of rice for enough clothes”.

“When they exchange commodities, they may lead to certain problems, when comparing the differences in the value of commodity. To solve this problem, people invented a tool called money”.

“Really. Is it so” exclaimed the children.

“You know that early man, who hunted and gathered food, later learnt to cultivate crops. When they found rivers which provided them water, settled down permanently near the rivers. These permanent settlements were called villages. Agriculture remains to be the root of our economy even today. Man has no limits for his demand and desire. Based on this, man started to learn new occupations. Those who are involved in farming and grazing are called farmers or cultivators”. 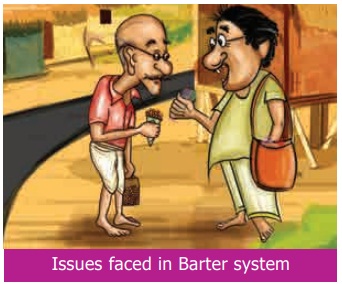 The amount from the income which is left for future needs after consumption is called savings.

“Is agriculture the primary occupation?”

“Yes, there are certain other primary activities like farming.

“Agriculture and industries are helpful in the economic development of our country. Our country’s economy is based on three economic activities”. 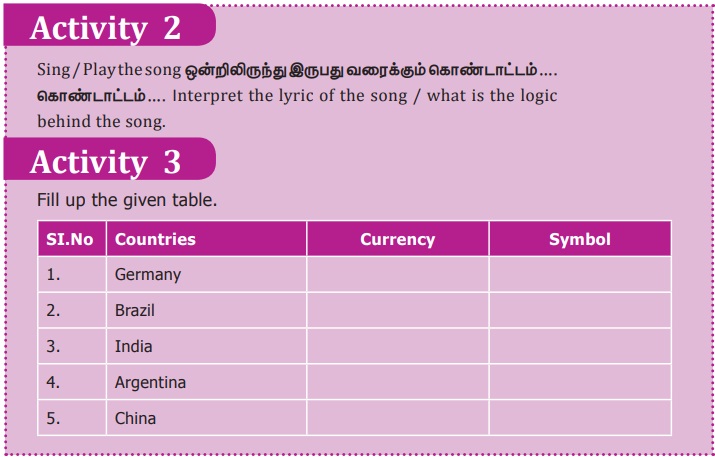 They are concerned with the production of raw materials for food stuff and industrial use. Primary activities include 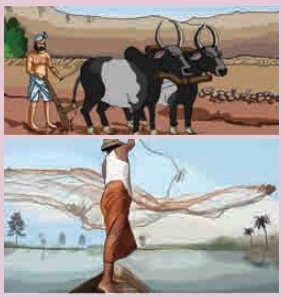 “Is agriculture confined only to villages? What other works do the villagers do?”

“What will a village look like uncle?” interrupted Inba.

“Agriculture is the primary occupation. There won’t be any kind of facilities like our cities. At the same time, they get their basic needs fulfilled easily. There are small shops. Vegetables are grown in abundance, just like rice and pulses. Though the sugar that is added in our milk, coffee and tea is produced in sugar mills, the raw material sugarcane is cultivated in villages. From chilies to mustard, all those provisions used for food are grown in villages.”

“Wow! My mother told me that these things are very expensive. Therefore, the villagers must be so wealthy!” said Adithya.

“No, not like that. They are just producers. Their products are bought and sold by some mediators. So, the farmers get very little money”.

“What a pity! But the villages are the real shadows of cities”, exclaimed Anandhan.

“Even Gandhiji has said that the villages are the backbone of our country”.

At that time, the mobile phone rang. Mohan attended the phone. Vimalan’s mother Ponni had called.

“What are you chatting about with the children for so long? The food is ready. Bring them home”, saying so, she cut the call.

“Children, come, let’s go home. Food is ready” Mohan got up and the children followed him with joy.

“No Inba. Both cities and villages are important on their own”.

“If it is so, tell us about the importance of cities”, asked Inba again. 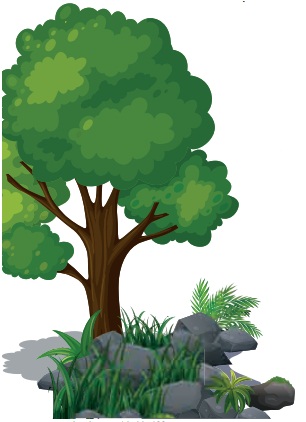 “Not only that. Tamil Nadu is well developed in secondary and tertiary activities as well. These are city centered activities.”

“We feel very proud to hear this uncle. Tell us about those activities”.

Uncle Mohan said, “Well, apart from this, employment opportunities are more in cities than villages. People involved in small scale industries and unorganized sector are mostly found in cities.”

“In villages, there are only a few saloons and laundry shops. But, in cities the number of such small scale workers are more. This results in additional income in cities."

Industries are classified on the basis of the availability of raw materials, capital and ownership.

• On the basis of raw materials, industries are classified as 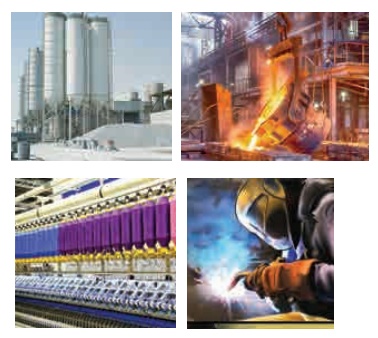 “Yes, well paved roads, ports, airports and railway stations support trade. Many branches of banks help in the circulation of money and boost the country’s economy. All these are termed as tertiary activities.”

Vimalan exclaimed, “Even being in the city, I never knew about all these.”

Inba said, “We really got to know more information, uncle”

“Good, will you compare cities and villages in the future?”

“Never, we won’t say such a thing. If anyone talks like that, we will explain whatever we have learnt from you” replied the children.

Come lets go and have our lunch”. Said Mohan.

Children said that they will come after playing for some more time.

Holding Kavin’s hand, they all ran towards the park.

Mohan, an economics teacher, felt proud of their unity and satisfied of clarifying something good to the children.

• Children understand the meaning of Sandhai.

• Get clear idea about the barter system.

• Gain knowledge of the various

1. Consumer – the one who uses the  products

4. Settlement – living place of human  being