Home | | Modern Pharmacology with Clinical Applications | Drugs Used in the Treatment of Erectile Dysfunction
Posted On :  06.01.2018 11:53 am

Drugs Used in the Treatment of Erectile Dysfunction

The term impotence has been used to indicate the inability of the male to attain and maintain erection of the penis sufficient to permit satisfactory sexual inter-course.

Drugs Used in the Treatment of Erectile Dysfunction

The term impotence has been used to indicate the inability of the male to attain and maintain erection of the penis sufficient to permit satisfactory sexual inter-course. Erectile dysfunction (ED) is the preferred term. ED is a common problem, especially among older men. Perhaps a more precise term for ED is that used to sig-nify inability of the man to achieve an erect penis as part of the multifaceted process of male sexual func-tion. Overall, the process encompasses a variety of physical aspects with significant psychological and be-havioral components.

In the United States approximately 10 million men have ED. While erectile function may not be the most important indicator of sexual satisfaction, ED may con-tribute to mental stress that affects interactions with family and associates. While many advances have oc-curred in the diagnosis and treatment of ED, other aspects remain poorly understood by the general popu-lation and even health care professionals. ED is fre-quently assumed to be a physiological event associated with aging, but that is not entirely accurate.

The incidence of ED can be as high as 50% in men aged 40 to 70, with the percentage increasing with age. Other risk factors associated with ED include chronic illnesses, medications, cigarette smoking, heavy alcohol consumption, sedentary patterns, and obesity. ED can be due to vasculogenic, neurogenic, hormonal, and/or psychogenic factors. It can also be due to changes in the nitric acid–cyclic guanosine monophosphate (cGMP) biochemical pathway.

Most cases of secondary ED are related to arte-riosclerosis. ED is also associated with hypertension, an-tihypertensive therapy, and diabetes mellitus, particu-larly in the older diabetic. Other chronic diseases, such as psychogenic disorders and Peyronie’s disease, may be associated with ED.

Several therapeutic agents, especially those that af-fect neurotransmitter activity (both agonist and antago-nist) are often associated with ED. Many such reports have been anecdotal, although 25% of ED may be drug-related. Several classes of drugs have been associated with ED (Table 64.1). The mechanism or mechanisms of drug-induced ED may be neural, endocrine, or idio-pathic. 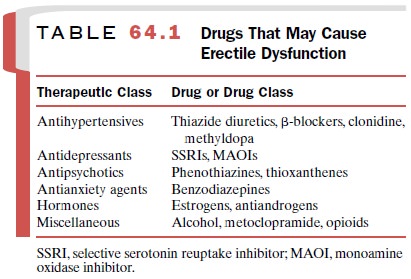 ED seems to be most frequently associated with antihypertensive medications, particularly β-blockers and thiazide diuretics. Estrogen therapy and the use of antiandrogens  can lead to changes in the endocrine system resulting in ED. Paradoxically, selective serotonin reuptake inhibitors (SSRIs) can be associated with ED while also being useful be for the treatment of premature ejaculation.