You would have studied in earlier classes about seed germination. In monocot plants like grass, there is only one first leaf (called cotyledon).

You would have studied in earlier classes about seed germination. In monocot plants like grass, there is only one first leaf (called cotyledon). Once germinated, the embryo sends a primary root downward into the soil and pushes the primary shoot to the soil surface. The tip of the embryonic shoot (plumule) is covered by a protective sheath called coleoptile. It is the coleoptile covered embryonic shoot that grows above the ground.

In one of the experiments initially Darwin noticed that germinated seeds also grow towards light. If, in a dark room light is placed in one end, the growing seedlings bend towards the light. In the next experiment, he carefully removed the tip from growing seedlings. The shoot did not bend towards the light. When he covered the tip (Coleoptile) with foil, preventing light from entering, the shoot did not bend. In the next step, he covered the elongating part of the shoot, but le the tip open. Now the bending could be noticed. Covering the elongating part of the shoot did not a ect the response to light at all! Darwin concluded “some ‘in uence’ is transmitted from the tip to the more basal regions of the shoot thereby regulating growth and inducing curvature”. is demonstrated clearly that something within the tip of the coleoptile controlled growth of the plant. 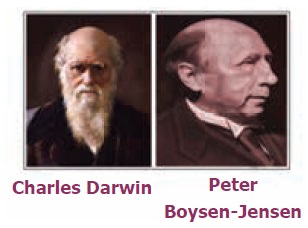 What is this influence? In 1913 Peter Boysen-Jensen, a Danish Botanist further developed Darwin’s experiments. He found that if he removed the coleoptiles, plant growth stopped. Then he inserted a piece of agar and then placed the coleptile on top of it the plant again was able to curve towards the light. Hence this chemical was predicted to be water soluble. He reasoned that chemicals that controlled the light sensitive movement (phototropism) moved through agar. 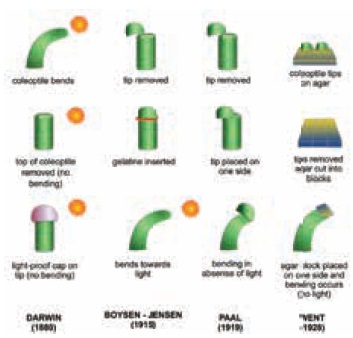 In his next experiment he replaced the agar block with butter. The above mentioned water soluble chemical did not dissolve in butter, as expected the chemical did not pass through butter. is water soluble “in uence” was later identi ed as the plant hormone Auxin. In response to light, auxin elongates the cells on the dark side of a stem so that the plant literally bends towards the light source. 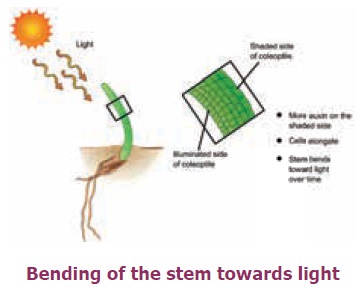 Science 9th std - TN 9th Science (English Medium) | Questions with Answers, Solution
TN State Board School - All Subjects
9th Standard - All Subjects
9th Science : Living World of Plants - Plant Physiology
Living World of Plants - Plant Physiology - Introduction
Do they Move on their own Accord?
Do Plants Move?
Do Plants Actually Sense Light?
Types of Tropisms in Plants
More to Movement than Growth - Plant Physiology
What is Photosynthesis?
Food chain: the Link between Plants, Animals and Microorganisms
Respiration in plants