Discovery of New Sea Routes to the East

These efforts eventually resulted in the great geographical discoveries which revealed to Europeans the existence of a New World on the other side of the Atlantic Ocean.

Discovery of New Sea Routes to the East

Multiple factors lead to the exploration of sea

(a) During the Crusades, the knights (warriors) returned with many types of goods from the East. The Europeans liked the eastern products, mainly the spices, which were used as food preservatives in the West. Till that time Arabs controlled the land-bound and maritime trade with the Asian countries including India and further east.

They exchanged the goods from various parts of Asia with the Italians, who then traded on them in Europe. The European powers, particularly Portugal and Spain, wanted to have direct trade with the Asian countries. They therefore encouraged the exploration of new routes, so that they could profit more. This was the decisive economic factor that provided the urge to discover new trade routes.

(b) As the demands for the products from the East increased, the European states wanted to earn more profits and control sea-borne trade. Hence they were interested in investing in the sea exploration.

(c) The spirit of the age that ‘let fools contest elections and the adventurous go and explore’ prompted many to opt for the latter course that promised both money and fame.

(d) The eagerness to spread religion (Christianity) also acted as an impetus to the exploration of new lands, though this was not a primary factor in the initial period. During the time of the Counter Reformation spreading the word of god gained prominence.

(e) Due to Renaissance there was development of technology in many fields. One such field was cartography (map-making). Ptolemy’s map of the first century CE was redrawn using new advances in techniques. A Renaissance geographer, Gerardus Mercator used the concepts of latitude and longitude to draw maps that were useful for the navigators.

(f) A new improved design of ships played a crucial role in the long, risky sea voyages. The building of caravel, a lighter ship that could easily sail in shallow water, was an important technological innovation.

(g) The hazards of sea voyages was mitigated by the availability of firearms and cannons.

(h) Sailors were no longer left to the mercy of a calm night and the bright stars to determine the direction in which they were sailing, since the Mariner’scompass was now available in Europe. 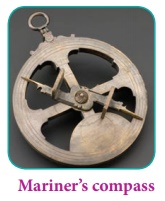 Located on the south-western part of Europe, the small country of Portugalled the way first in exploration, discovering the Canaries, Madeiraand the Azores. In 1442 Henry, the Navigator sailors sent out by Prince Henry, the Navigator reached Guinea Coast of Africa and later in 1488 Bartholomew Diaz rounded the Cape of Good Hope. 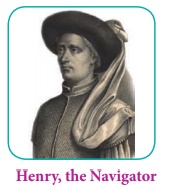 Henry, the Navigator was a Portuguese prince. Though he never ventured into the sea, he started a school of navigation at Sagres, Portugal. He hired cartographers, shipbuilders and instrument makers to help sailors undertake planned voyages.

Christopher Columbus, an Italian from Genoa, fough many difficulties before he secured the patronage of the Spanishrulers Ferdinand and Isabella. On 3 August 1492 Columbus sailed from the harbour of Palos near Cadiz, with three small ships (the Santa Maria, the Pinta and the Nina). 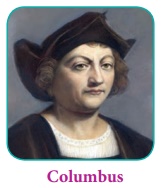 After a voyage of two months and nine days in 1492 he came to a land which he believed to be India. But it was really a new continent, America. He returned to Spain with gold, cotton, strange beasts and two wild-eyed painted “Indians” to be baptised. They were called Indians because, to the end of his days, he believed that the land he had discovered was India.

The success of Columbus prompted Vasco da Gama to start his historic voyage (1497) to the eastern part. He set sail with four ships from Lisbon and reached the island of Mozambique. Later he travelled further south and reached Kapad, a beach near Kozhikode, Kerala. By reaching a part of India, he opened avenues for direct trade with India. This voyage led to the colonisation of a few regions in India. One such region was Goa. 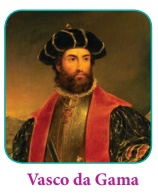 The Spanish kings were apprehensive about the Portuguese venture into sea voyages. They requested Pope Alexander VI to find a solution. In 1493, the Pope issued a Papal Bull (proclamation). The proclamation drew a north–south line from pole to pole, passing around 320 miles west of the Cape Verde islands. It declared that any new discoveries west of the line belonged to Spain. Portugal was not happy with the arrangement. The following year (1494) it struck an agreement with Spain, signing the Treaty of Tordesillas. This arrangement respected the concept of a north–south line of demarcation, but shifted it to 1,185 miles west of the Cape Verde islands, and acknowledged that everything discovered east of it would belong to Portugal. Six years later, in April 1500, this turned out to Portugal’s advantage, when Pedro Álvares Cabral landed on the east coast of Brazil, and was able to claim it for Portugal.

In 1500 Pedro Cabral sailed westward and discovered Brazil. Pedro Cabral named the island as “Island of the True Cross”. Brazil became Portugal’s colony and its subsequent history is dealt with in Unit XI. 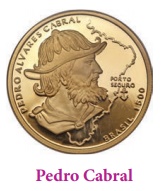 Cabral sailed to India, following the route of Vasco da Gama, and reached Kozhikode. Initially the zamorin ruler was well disposed towards the Portuguese and allowed Cabral to build a fort and carry on trade. However, disputes soon arose with the Arab traders and a large Arab force attacked the trading post and killed many Portuguese soldiers. Cabral retaliated with reinforcements from Portugal. He captured 10 Arab vessels and executed their crews. He then left for Cochin (now Kochi), further south, where he was warmly received and permitted to trade. After establishing a port at Cannanore (now Kannur) Cabral returned on January 16, 1501, with six shiploads of spices to Portugal. On his way, however, two ships failed, and Cabral finally reached Portugal with four ships on June 23, 1501.

Ferdinand Magellan, a Portuguese sailor got Spanish support to explore the world. With five ships he sailed out of Seville westward in 1519. He found a strait at the tip of South America and named it the Strait of Magellan. From there the crew reached the Great South Sea. As the sea remained calm, he called it Pacific Ocean (Pacifico means peaceful in Spanish). In the voyage, Magellan lost two of his ships and many of the crew due to disease. Magellan himself was killed in the Philippie Isles. Finally, a single ship, the Vittoria (or Victoria) with 18 sailors returned to Seville in 1522. Vittoria was the first ship that ever circumnavigated the world. 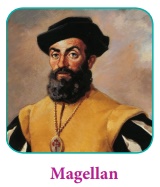 Turks, French, English, and Germans had not yet realised the significance of the new sea routes to Asia. They were yet to understand the political importance of the European discovery of America. Hernan Cortes, a Spanish Conquistador, with a mere handful of men conquered the Empire of Mexico for Spain. Pizarro crossed the Isthmus of Panama (1530) and subjugated another country Peru, destroying the Inca Empire in south America. 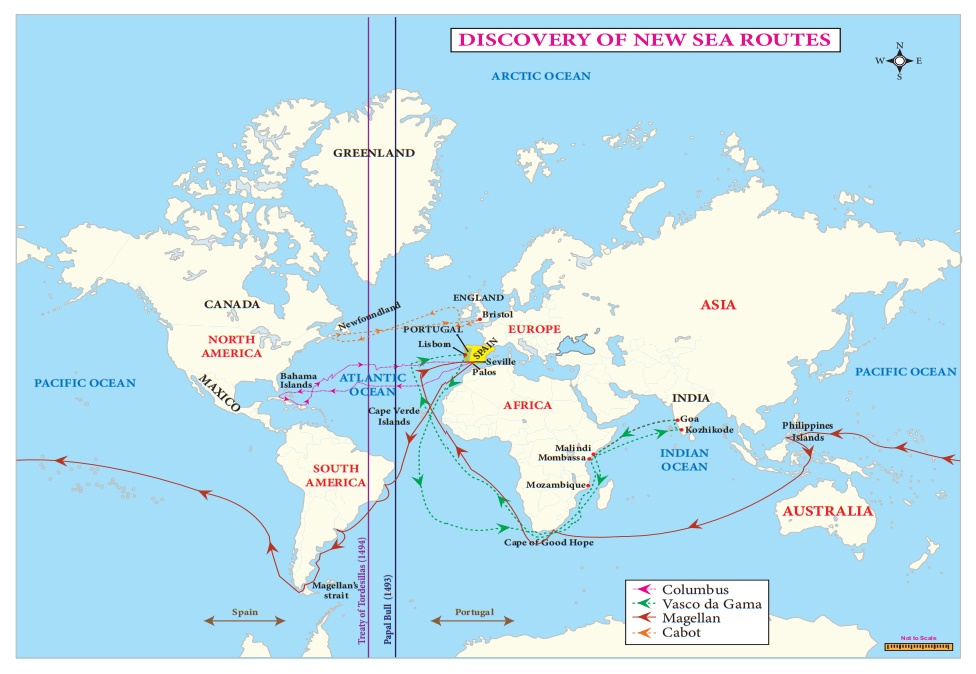 Following in the footsteps of the Portuguese and the Spanish seafarers, other European countries started exploring the world. John Cabot, an Italian explorer, was commissioned by England to find new lands across the globe. On his voyage he saw Canada and made it an English colony. Giovanni da Verrazano, another Italian, explored the lands for the French. He annexed provinces for the French in eastern Canada. An English explorer named Henry Hudson wanted to find the passage from North America to the Pacific Ocean. Though he failed in his initiative, he explored the region which now bears his name – Hudson River.

Catastrophic Impact of Spanish Arms: Although the Aztecs had superior numbers, with firearms and steel blades at his disposal, just one Spaniard could annihilate dozens or even hundreds of opponents: “On a sudden, they speared and thrust people into shreds,” wrote one indigenous chronicler, a witness to the terrifying impact of European arms. “Others were beheaded in one swipe... Others tried to run in vain from the butchery, their innards falling from them and entangling their very feet.” A smallpox epidemic outbreak weakened the Aztec while giving Cortes time to regroup, resume fighting and finally emerge victorious.

Due to the rising competition from England, there was conflict between Spain and England. Francis Drake annexed California region for the English, despite protests from Spain. This led to war between the two nations. In 1588 King Philip II of Spain sent an armada or Spanish fleet of 130 vessels and 31,000 soldiers to invade England. However, the English with their easily manoeuvrable fleet easily destroyed the Spanish Armada. This marked the rise of the British as an important power in modern world.