As all the enzymes involved in digestion are water soluble, lipids pose a special problem due to their insoluble nature.

As all the enzymes involved in digestion are water soluble, lipids pose a special problem due to their insoluble nature. The problem of fat digestion is solved by emulsification of fats (i.e). breaking of large fat particles to small particles such that there is an increase in the surface area, which facilitates the interaction of fats with the fat hydrolyzing enzyme lipase.

Recently, a lingual lipase has been detected in mouth. Its optimum pH is 4 to 4.5. It acts on the food in the stomach, where it resides for some time. Lingual lipase is best suited to act on milk.

Gastric lipase acts on triglycerides to some extent only because,

o     no emulsification of fats takes place in the stomach.

o     the quantity of enzyme present is very low.

Fats delay the rate of emptying of stomach, by inhibiting the gastric motility via the hormone enterogastrone. Thus they have a high satiety value (fillingness of the stomach).

3.  Digestion in duodenum and small intestine

The digestion of fats takes place mainly in the duodenum and small intestine because of the presence of powerful enzyme lipase in the pancreatic juice and emulsification of fats by the bile salts.

Pancreatic lipase is called as steapsin and it acts on the triglycerides present in the diet. It has an optimum pH at the alkaline range.

The action of lipase on triglycerides occurs by the following steps.

·              Conversion of triglyceride to α, β diglyceride by removal of the terminal fatty acid.

The other enzymes present in pancreatic juice are phospholipases and cholesterol esterase. 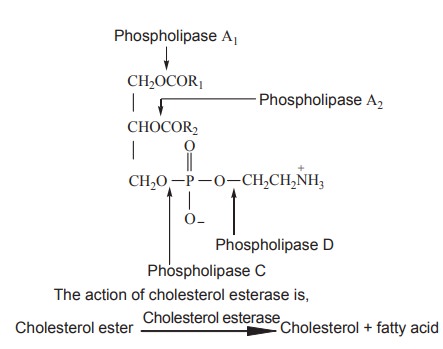 ·              A part of glycerol and short chain fatty acids are directly absorbed by the portal circulation and taken to the liver.

·              Glycerol and fatty acids that enter to the intestinal epithelial cells are converted to triglycerides and in the lacteals, they are covered with a layer of hydrophilic phospholipids, cholesterol, cholesterol esters and an apoprotein apo B. After being packaged to a more hydrophilic soluble form, they enter into the lymphatic circulation and finally enters the systemic circulation via the thoracic duct.

·              Absorption of cholesterol is facilitated by unsaturated fatty acids and bile salts.