The major carbohydrates present in our diet are starch, glycogen, sucrose, lactose , maltose and very little concentrations of fructose and pentose.

The major carbohydrates present in our diet are starch, glycogen, sucrose, lactose , maltose and very little concentrations of fructose and pentose.

Milk and other fluid items like juices escape digestion in the mouth as they do not reside in the mouth for a longer time, whereas, starch and glycogen containing solid foods are masticated with saliva thoroughly. Saliva contains ptyalin, an a amylase, which attacks the a 1-4 linkages resulting in the formation of monosaccharide glucose, disaccharide maltose and trisaccharide maltotriose. However, because of steric hindrance caused by the branches, some of the interior a 1-4 linkages are inaccessible for the enzyme. This results in the formation of a highly branched structure called as limit dextrin.

The optimum pH for salivary amylase is pH 6.7. Ptyalin needs chloride ions for their effective action.

When food along with ptyalin reaches the stomach, ptyalin is inactivated due to low pH. There are no enzymes to act upon carbohydrates in the stomach. No change to polysaccharides occurs in the stomach. Dietary sucrose may be hydrolyzed to equimolar quantities of glucose and fructose by the HCl present.

When the food bolus reaches the duodenum, it is mixed with the pancreatic juice, which contains α - amylase. Its action is similar to that of the ptyalin, but it is more powerful because

·              It can hydrolyze the interior linkages of the starch, which were inaccessible for ptyalin.

The optimum pH of pancreatic amylase ranges between 6.9 – 7.1 and it needs chloride ions for its action

Five enzymes are present in small intestine to hydrolyze the carbohydrates completely to monosaccharides.

b. Lactase :It isb-galactosidase that hydrolyses lactose molecule to equimolar amounts of glucose and galactose. Its optimum pH is 5.4 – 6.0

c. Maltase : It is a glucosidase that acts ona1-4 linkages of maltose yieldingglucose molecules. Five different maltases have been identified in the intestinal epithelial cells. Its optimum pH ranges between 5.8 – 6.2.

d. Sucrase : It hydrolyzes sucrose to equimolar amounts of glucose and fructose byhydrolyzing b 1-2 linkages.

There are no enzymes present in our digestive system to hydrolyze b1,4 linkages in cellulose, so it cannot be digested.

1. Simple Diffusion: Initially, when the concentration of glucose in the intestinallumen is high, by simple diffusion it crosses the membrane.

The steps involved in the transport of glucose are :

·              Binding of sodium and glucose induces a conformational change in the transporter. 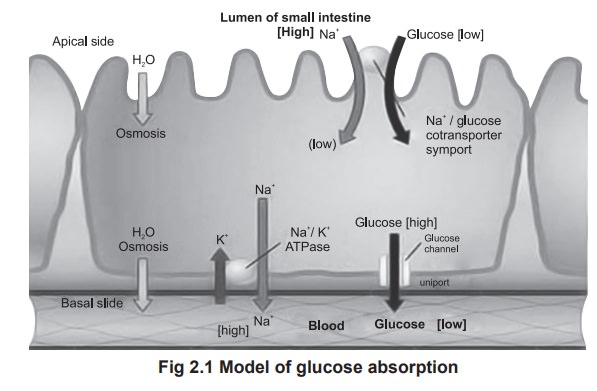 ·              The conformational change leads to the delivery of sodium and glucose molecules to the intestinal cells.

·              Sodium is pumped out of the cell resulting in the net absorption of glucose molecule alone.

Step (iv) needs energy that is derived by ATP hydrolysis.