One’s protein requirement is determined by size, age, sex, and physical and emotional conditions. A large person has more body cells to maintain than a small person. A growing child, a pregnant woman, or a woman who is breastfeeding needs more protein for each pound of body weight than the average adult. When digestion is inefficient, fewer amino acids are absorbed by the body; consequently the protein requirement is higher. This is sometimes thought to be the case with the elderly. Extra proteins are usually required after surgery, severe burns, or during infections in order to replace lost tissue and to manufacture antibodies. In addition, emotional trauma can cause the body to excrete more nitrogen than it normally does, thus increasing the need for protein foods.

The National Research Council of the National Academy of Sciences con-siders the average adult’s daily requirement to be 0.8 gram of protein for each kilogram of body weight. To determine your requirement, do the following:

·  Divide body weight by 2.2 (the number of pounds per kilogram).

·  Multiply the answer obtained in step 1 by 0.8 (gram of protein per kilogram of body weight).

In 2002 the Dietary Reference Intakes (DRIs) for protein were published by the National Academy of Sciences (see Table 6-4). An Adequate Intake (AI) was established for infants 0 to 6 months, with all other recommendations based on 0.8 g/kg of body weight. Table 6-5 provides an idea of the amount of protein in an average day’s diet. (For specific amounts of protein in other foods, refer to Appendix D.) 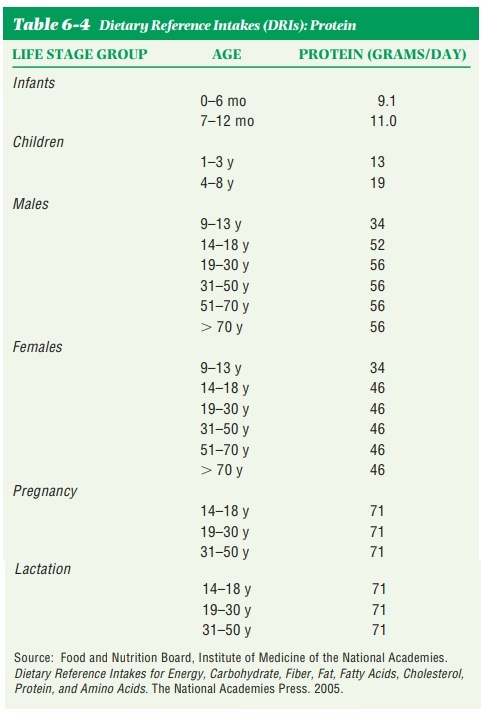 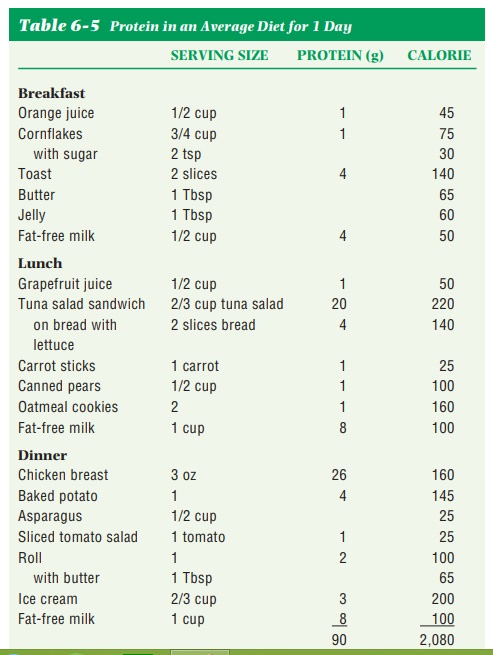 It is easy for people living in the developed parts of the world to ingest more protein than the body requires. There are a number of reasons why this should be avoided. The saturated fats and cholesterol common to complete protein foods may contribute to heart disease and provide more calories than are desirable. Some studies seem to indicate a connection between long-term high-protein diets and colon cancer and high calcium excretion, which de-pletes the bones of calcium and may contribute to osteoporosis. People who eat excessive amounts of protein-rich foods may ignore the also essential fruits and vegetables, and excess protein intake may put more demands on the liver (which converts nitrogen to urea) and the kidneys to excrete excess urea than they are prepared to handle. Therefore, the National Research Council recommends that protein intake represent no more than 15% to 20% of one’s daily calorie intake and not exceed double the amount given in the table of DRIs (Table 6-4).

Protein and amino acid supplements are taken for a number of reasons, such as “bulking up” by athletes, growing fingernails, and sparing body protein in weight loss. It is weight lifting, not protein bars or protein supplements, that builds muscles. Fingernails have never been affected by extra protein, and dieters need a balanced diet using the guidelines of MyPyramid.

High-quality protein foods are more bioavailable than expensive sup-plements. Single amino acids can be harmful to the body and never occur naturally in food. The body was designed to handle food, not supplements. If a single amino acid has been recommended, it is very important that a physician be consulted before the amino acid is used.

Protein requirements may be discussed in terms of nitrogen balance. This occurs when nitrogen intake equals the amount of nitrogen excreted. Posi-tive nitrogen balance exists when nitrogen intake exceeds the amountexcreted. This indicates that new tissue is being formed, and it occurs dur-ing pregnancy, during children’s growing years, when athletes develop additional muscle tissue, and when tissues are rebuilt after physical trauma such as illness or injury. Negative nitrogen balance indicates that protein is being lost. It may be caused by fevers, injury, surgery, burns, starvation, or immobilization.

When people are unable to obtain an adequate supply of protein for an extended period, muscle wasting will occur, and arms and legs become very thin. At the same time, albumin (protein in blood plasma) deficiency will cause edema, resulting in an extremely swollen appearance. The water is excreted when sufficient protein is eaten. People may lose appetite, strength, and weight, and wounds may heal very slowly. Patients suffering from edema become lethar-gic and depressed. These signs are seen in grossly neglected children or in the elderly, poor, or incapacitated. It is essential that people following vegetarian diets, especially vegans, carefully calculate the types and amount of protein in their diets so as to avoid protein deficiency.

People suffering from protein energy malnutrition (PEM) lack both protein and energy-rich foods. Such a condition is not uncommon in developing coun-tries where there are long-term shortages of both protein and energy foods. Children who lack sufficient protein do not grow to their potential size. Infants born to mothers eating insufficient protein during pregnancy can have perma-nently impaired mental capacities.

Two deficiency diseases that affect children are caused by a grossly inad-equate supply of protein or energy or both. Marasmus, a condition resulting from severe malnutrition, afflicts very young children who lack both energy and protein foods as well as vitamins and minerals. The infant with marasmus appears emaciated but does not have edema. Hair is dull and dry, and the skin is thin and wrinkled (Figure 6-3). The other protein deficiency disease that affects children as well as adults is kwashiorkor (Figure 6-4). Kwashiorkor appears when there is a sudden or recent lack of protein-containing food (such as during a famine). This disease causes fat to accumulate in the liver, and the lack of protein and hormones results in edema, painful skin lesions, and changes in the pigmentation of skin and hair. The mortality rate for kwashiorkor patients is high. 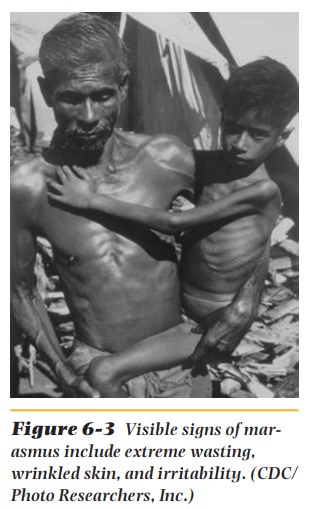 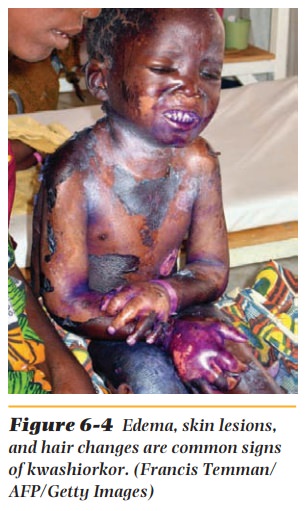 Those who survive these deficiency diseases may suffer from permanent mental retardation. The ultimate cost of food deprivation among youngchildren is high, indeed.

Table 6-6 lists some signs that help distinguish marasmus from kwashiorkor. 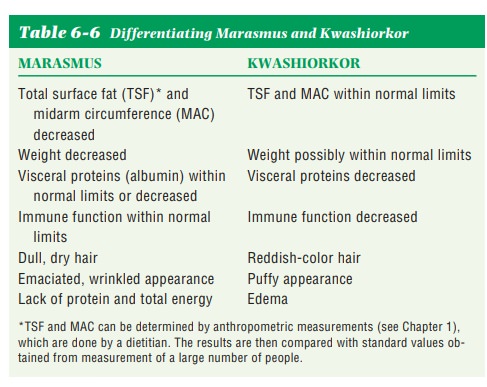