The diagnosis of UTI is based on examination of the normally sterile urine for evidence of bacteria or an accompanying inflammatory reaction. Critical to this examination is the use of appropriate techniques for specimen collection.

The diagnosis of UTI is based on examination of the normally sterile urine for evidence of bacteria or an accompanying inflammatory reaction. Critical to this examination is the use of appropriate techniques for specimen collection. Urine is most easily obtained by sponta-neous micturition. Unfortunately, voided urine is invariably contaminated with urethral flora and, in female patients, perineal and vaginal flora, which can confound the results of labora-tory testing. Although the contaminants can never be completely eliminated, their quantity may be diminished by carefully cleansing the periurethrum before voiding and allowing the initial part of the stream to flush the urethra before collecting a specimen for examination. This clean-voided midstream urine collection procedure is preferred to catheterization for routine purposes because it avoids the risk of introducing organisms into the bladder. When the laboratory examination of such a specimen produces equivocal results or the patient cannot comply with the requirements of the clean-voided technique, catheterization or suprapubic aspiration from the distended bladder may be necessary.

For the diagnosis of prostatitis, urine is collected in three segments by interrupting a single bladder excavation. The first voiding is considered a urethral washout. The mid-stream specimen that follows is used to assess cystitis. The prostate is then massaged, and the final urine is a prostatic secretions washout. The quantitative culture results are then compared. In prostatitis, it is expected that the third specimen contains the largest num-bers of the pathogen.

Approximately 90% of patients with acute symptomatic UTI have pyuria (that is, >10 white cells/mm3 of urine). This finding is also common, however, in a number of noninfectious diseases. More specific is the presence of white cell casts, which occur primarily in patients with acute pyelonephritis. A more sensitive and specific microscopic procedure is a Gram-stained smear of uncentrifuged urine (Fig 66–1). The presence of at least one organism per oil-immersion field is almost always indicative of bacterial infection. 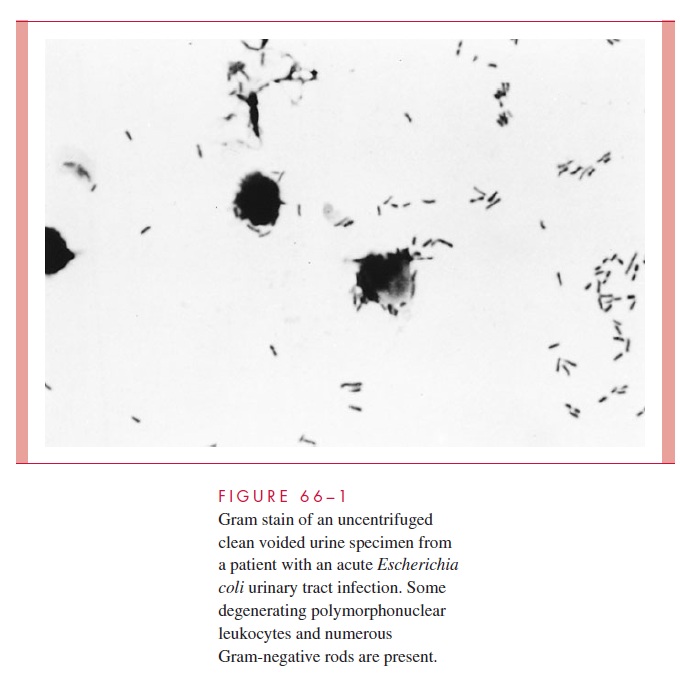 The absence of white cells and bacteria in several fields makes the diagnosis of UTI unlikely. However, this finding does not rule it out, especially in young women with acute, symptomatic infection who may be infected with smaller numbers of organisms.

A number of nonmicroscopic urinary screening tests have been commercially mar- keted within the past several years. The most successful detects leukocyte esterase from inflammatory cells and nitrite produced from urinary nitrates by bacterial metabolism.

Based on studies done half a century ago demonstrating that the number of bacteria in infected urine is large, quantitative bacteriology has been the gold diagnostic standard for UTI. Perhaps no number in medicine is better known or more slavishly adhered to than 105 bacteria/mL of urine. Above it is UTI, below it is contamination. We now know that it is possible to void more than 105 of contaminants and to have a genuine UTI with less than 105 bacteria as illustrated in Figure 66 – 2. Virtually no woman with sterile bladder urine, as determined by suprapubic aspiration, can void a sterile specimen even with peri-urethral cleansing. 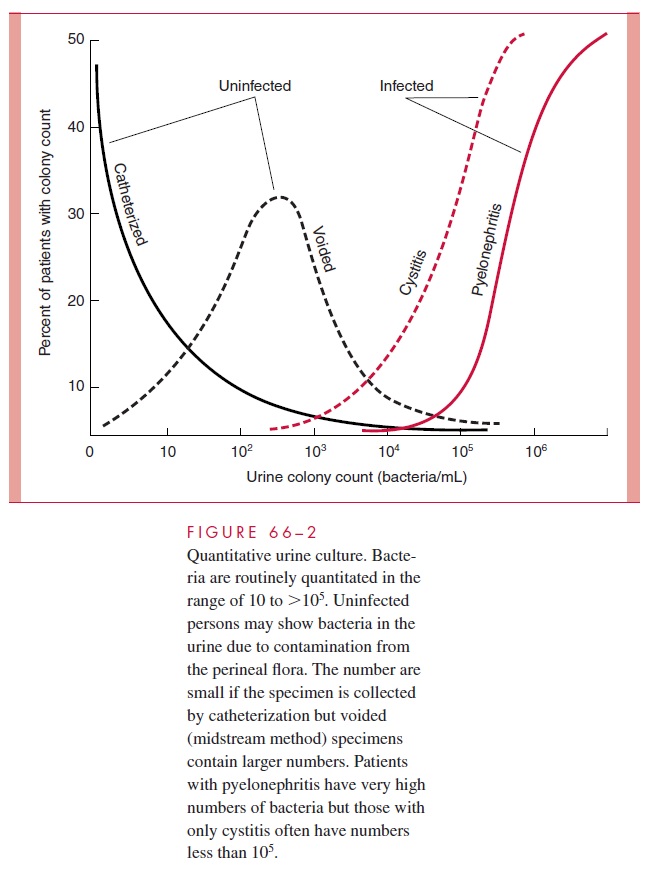 Voided contaminants are most often mixtures of vaginal flora not asso-ciated with UTI such as lactobacilli, diphtheroids, and streptococci, but can include uri-nary pathogens. Conversely, we now know that bacterial counts in UTI represent a spectrum from 102 to more than 106 bacteria/mL. The lower counts are typical for simple cystitis and the high counts for pyelonephritis. Fully one third of women with UTI limited to the bladder demonstrate counts less than 105 bacteria/mL.

Given the overlap, application of these findings to clinical practice requires linking the epidemiologic probability to the clinical findings. If a woman has symptoms of cysti-tis and a culture positive for a urinary pathogen, the probability she has a UTI is 90%, even if the count is as low as 103 bacteria/mL. If the woman is asymptomatic, the proba-bility drops to 80% even if the count is more than 105/mL. In the latter case, the culture must be repeated before concluding that a UTI is present. Voiding more than 105 of the same contaminant twice in a row is unlikely. There is no reason to repeat positive cultures from symptomatic patients. Catheterized and suprapubic specimens may be accepted at face value, because they come directly from the bladder.