A spring is defined as an elastic body, whose function is to distort when loaded and to recover its original shape when the load is removed.

A spring is defined as an elastic body, whose function is to distort when loaded and to recover its original shape when the load is removed. The various important applications of springs are as follows:

To cushion, absorb or control energy due to either shock or vibration as in car springs, railway buffers, air-craft landing gears, shock absorbers and vibration dampers.

To apply forces, as in brakes, clutches and spring loaded valves.

To control motion by maintaining contact between two elements as in cams and followers.

To measure forces, as in spring balances and engine indicators.

To store energy, as in watches, toys, etc. 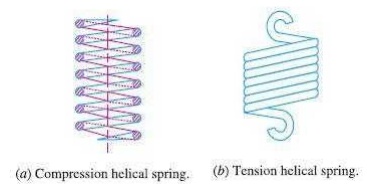 The helical springs are said to be closely coiled when the spring wire is coiled so close that the plane containing each turn is nearly at right angles to the axis of the helix and the wire is subjected to torsion. In other words, in a closely coiled helical spring, the helix angle is very small, it is usually less than 10°. The major stresses produced in helical springs are shear stresses due to twisting. The load applied is parallel to or along the axis of the spring.

The helical springs have the following advantages:

These are easy to manufacture.

These are available in wide range.

These have constant spring rate.

Their performance can be predicted more accurately.

Their characteristics can be varied by changing dimensions.

The conical and volute springs, as shown in Fig., are used in special applications where a telescoping spring or a spring with a spring rate that increases with the load is desired. The conical spring, as shown in Fig(a), is wound with a uniform pitch whereas the volute springs, as shown in Fig (b), are wound in the form of paraboloid with constant pitch and lead angles. The springs may be made either partially or completely telescoping. In either case, the number of active coils gradually decreases. The decreasing number of coils results in an increasing spring rate. This characteristic is sometimes utilised in vibration problems where springs are used to closely coiled helical springs only.support a body that has a varying mass. 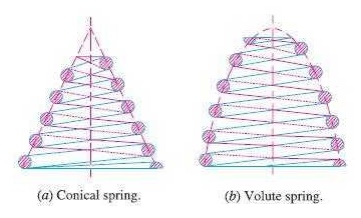 The major stresses produced in conical and volute springs are also shear stresses due to twisting.

These springs may be of helical or spiral type as shown in Fig. The helical type may be used only in applications where the load tends to wind up the spring and are used in various electrical mechanisms.

The spiral type is also used where the load tends to increase the number of coils and when made of flat strip are used in watches and clocks.The major stresses produced in torsion springs are tensile and compressive due to bending.

The laminated or leaf spring (also known as flat spring or carriage spring) consists of a number of flat plates (known as leaves) of varying lengths held together by means of clamps and bolts, as shown in Fig. These are mostly used in automobiles.

The major stresses produced in leaf springs are tensile and compressive stresses.

These springs consist of a number of conical discs held together against slipping by a central bolt or tube as shown in Fig. These springs are used in applications where high spring rates and compact spring units are required.

The material of the spring should have high fatigue strength, high ductility, high resilience and it should be creep resistant. It largely depends upon the service for which they are used i.e. severe service, average service or light service.

Severe service means rapid continuous loading where the ratio of minimum to maximum load (or stress) is one-half or less, as in automotive valve springs.

Average service includes the same stress range as in severe service but with only intermittent operation, as in engine governor springs and automobile suspension springs.

Light service includes springs subjected to loads that are static or very infrequently varied, as in safety valve springs.