Design of Cam Clutches and Brakes

DESIGN OF CAM CLUTCHES AND BRAKES

Following are the two main types of clutches commonly used in engineering practice :

The positive clutches are used when a positive drive is required. The simplest type of a positive clutch is a jaw or claw clutch. The jaw clutch permits one shaft to drive another through a direct contact of interlocking jaws. It consists of two halves, one of which is permanently fastened to the driving shaft by a sunk key. The other half of the clutch is movable and it is free to slide axially on the driven shaft, but it is prevented from turning relatively to its shaft by means of feather key. A square jaw type is used where engagement and disengagement in motion and under load is not necessary. This type of clutch will transmit power in either direction of rotation. The spiral jaws may be left-hand or right-hand, because power transmitted by them is in one direction only. This type of clutch is occasionally used where the clutch must be engaged and disengaged while in motion. The use of jaw clutches are frequently applied to sprocket wheels, gears and pulleys. In such a case, the non-sliding part is made integral with the hub.

A friction clutch has its principal application in the transmission of power of shafts and machines which must be started and stopped frequently. Its application is also found in cases in which power is to be delivered to machines partially or fully loaded. The force of friction is used to start the driven shaft from rest and gradually brings it up to the proper speed without excessive slipping of the friction surfaces. In automobiles, friction clutch is used to connect the engine to the drive shaft. In operating such a clutch, care should be taken so that the friction surfaces engage easily and gradually bring the driven shaft up to proper speed. The proper alignment of the bearing must be maintained and it should be located as close to the clutch as possible. It may be noted that :

2. The heat of friction should be rapidly

3.  The surfaces should be backed by a material stiff enough to ensure a reasonably uniform distribution of pressure.

The material used for lining of friction surfaces of a clutch should have the following characteristics:

1. It should have a high and uniform coefficient of friction.

2. It should not be affected by moisture and oil.

3. It should have the ability to withstand high temperatures caused by slippage.

4. It should have high heat conductivity.

5. It should have high resistance to wear and scoring.

DESIGN OF A DISC OR PLATE CLUTCH

r1 and r2 = External and internal radii of friction faces,

r = Mean radius of the friction face, and

Consider an elementary ring of radius r and thickness dr

We know that area of the contact surface or friction surface = 2π r.dr

and the frictional force on the ring acting tangentially at radius r,

acting on the ring,

We shall now consider the following two cases :

1. When there is a uniform pressure, and

2. When there is a uniform axial wear.

1. Considering uniform pressure. When the pressure is uniformly distributed over the entire

area of the friction face then the intensity of pressure,

where W = Axial thrust with which the friction surfaces are held together.

∴Integrating this equation within the limits from r2 to r1 for the total friction torque. Total frictional torque acting on the friction surface or on the clutch,

This wearing-in process continues until the product p.V is constant over the entire surface. After this, the wear will be uniform.

and the normal force on the ring,

A brake is a device by means of which artificial frictional resistance is applied to a moving machine member, in order to retard or stop the motion of a machine. In the process of performing this function, the brake absorbs either kinetic energy of the moving member or potential energy given up by objects being lowered by hoists, elevators etc.

The energy absorbed by brakes is dissipated in the form of heat. This heat is dissipated in the surrounding air (or water which is circulated through the passages in the brake drum) so that excessive heating of the brake lining does not take place. The design or capacity of a brake depends upon the following factors :

1. The unit pressure between the braking surfaces,

2. The coefficient of friction between the braking surfaces,

3. The peripheral velocity of the brake drum

4. The projected area of the friction surfaces, and

5. The ability of the brake to dissipate heat equivalent to the energy being absorbed.

The major functional difference between a clutch and a brake is that a clutch is used to keep the driving and driven member moving together, whereas brakes are used to stop a moving member or to control its speed.

Energy Absorbed by a Brake

The energy absorbed by a brake depends upon the type of motion of the moving body. The motion of a body may be either pure translation or pure rotation or a combination of both translation and rotation. The energy corresponding to these motions is kinetic energy. Let us consider these motions as follows :

This energy must be absorbed by the brake. If the moving body is stopped after applying the brakes, then v2 = 0, and

2. When the motion of the body is pure rotation. Consider a body of mass moment of inertia I (about a given axis) is rotating about that axis with an angular velocity ω1 rad / s. Let its angular velocity is reduced to ω2 rad / s after applying the brake. Therefore, the change in

This energy must be absorbed by the brake. If the rotating body is stopped after applying the brakes, then ω2 = 0, and

Total kinetic energy to be absorbed by the brake,

Heat to be Dissipated during Braking

The energy absorbed by the brake and transformed into heat must be dissipated to the surrounding air in order to avoid excessive temperature rise of the brake lining. The upon the mass of the brake drum, the braking time and the heat dissipation capacity of the brake. The highest permissible temperatures recommended for different brake lining materials are given as follows :

Since the energy absorbed (or heat generated) and the rate of wear of the brake lining at a particular speed are dependent on the normal pressure between the braking surfaces, therefore it is an important factor in the design of brakes. The permissible normal pressure between the braking surfaces depends upon the material of the brake lining, the coefficient of friction and the maximum rate at which the energy is to be absorbed. The energy absorbed or the heat generated is given by

where μ = Coefficient of friction,

RN = Normal force acting at the contact surfaces, in newtons,

p = Normal pressure between the braking surfaces in N/m2,

A = Projected area of the contact surfaces in m2, and

v = Peripheral velocity of the brake drum in m/s.

The heat generated may also be obtained by considering the amount of kinetic or potential energies which is being absorbed. In other words,

The heat dissipated (Hd) may be estimated by

t1 – t2 = Temperature difference between the exposed radiating surface and the surrounding air in °C, and

The expressions for the heat dissipated are quite approximate and should serve only as an indication of the capacity of the brake to dissipate heat. The exact performance of the brake should be determined by test.

It has been found that 10 to 25 per cent of the heat generated is immediately dissipated to the surrounding air while the remaining heat is absorbed by the brake drum causing its temperature to rise. The rise in temperature of the brake drum is given by

where  t = Temperature rise of the brake drum in °C

Hg = Heat generated by the brake in joules,

m = Mass of the brake drum in kg, and

c = Specific heat for the material of the brake drum in J/kg °C.

In brakes, it is very difficult to precisely calculate the temperature rise. In preliminary design analysis, the product p.v is considered in place of temperature rise. The experience has also shown that if the product p.v is high, the rate of wear of brake lining will be high and the brake life will be low. Thus the value of p.v should be lower than the upper limit value for the brake lining to have reasonable wear life. The following table shows the recommended values of p.v as suggested by various designers for different types of service.

1.     A single plate clutch with both sides effective; is required to transmit 25 kw at 900 rpm. t hw outer diameter of the plate is 350 mm. the maximum intensity of pressure over the friction surface is not to exceed 0.1 N/mm2 . considering uniform wear criteria and assuming coefficient of friction as 0.25; determine (i) the inner diameter of the plate (ii) axial force required to engage the clutch.

I.Inner diameter of the plate 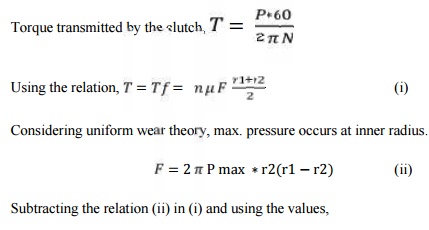 Subtracting the relation (ii) in (i) and using the values,

2. A multiple – disc clutch transmits 50 kw of power at 1400 rom. Axial intensity of pressure not to exceed 0.12 1 N/mm2, and the coefficient of friction of the friction surfaces is 0.12. the inner radius of the discs is 80 mm, and is .7 times the outer radius. Determine number of disc required to transmit the given power. Assume uniform wear condition.

3. A cone clutch with asbestos friction lining, transmits 25 kw at 600 rpm. The coefficient is 0.25 and the maximum intensity of pressure is 0.25 N/ mm2. The semi cone angle is 12.50. the outer diameter of friction lining is 250 mm . Considering uniform wear theory. Determine

i. the inner diameter of the friction lining,

ii. the face width of friction lining and

iii.the force required to engage to the clutch. 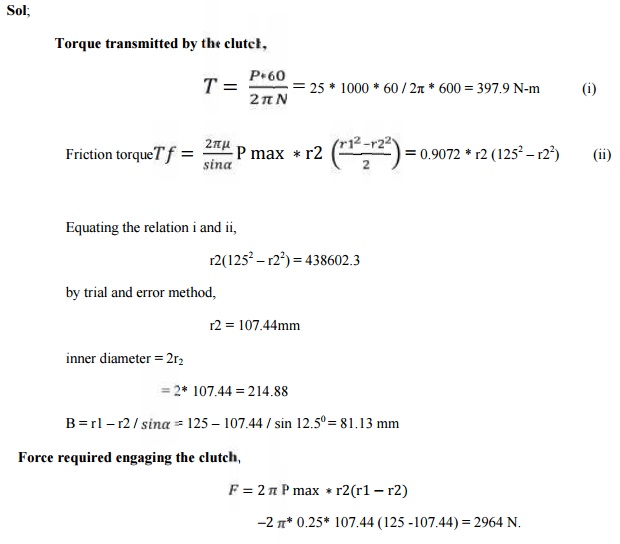 4. A single block brake is shown in figure. The diameter of the drum is 300 mm and the angle of contact is 900. If the operating force of 600N is applied at the end of a lever and the coefficient of friction between the drum and lining is 0.3 determine the torque that may be transmitted by the block brake.

In the present case the angle of contact is greater than 600. Hence, the equivalent coefiicient of friction is given by, 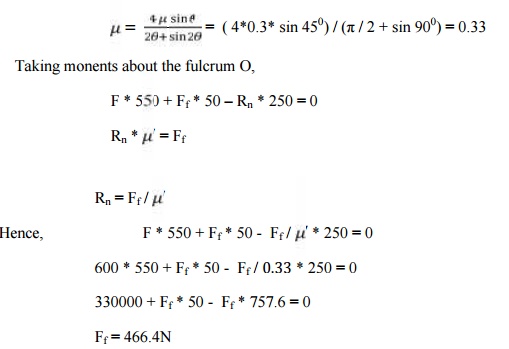