A bearing is a machine element which support another moving machine element (known as journal). It permits a relative motion between the contact surfaces of the members, while carrying the load.

A bearing is a machine element which support another moving machine element (known as journal). It permits a relative motion between the contact surfaces of the members, while carrying the load. A little consideration will show that due to the relative motion between the contact surfaces, a certain amount of power is wasted in overcoming frictional resistance and if the rubbing surfaces are in direct contact, there will be rapid wear. In order to reduce frictional resistance and wear and in some cases to carry away the heat generated, a layer of fluid (known as lubricant) may be provided. The lubricant used to separate the journal and bearing is usually a mineral oil refined from petroleum, but vegetable oils, silicon oils, greases etc., may be used.

Though the bearings may be classified in many ways, yet the following are important from the subject point of View:

1.1 Depending upon the direction of load to be supported.

The bearings under this group are classified as: 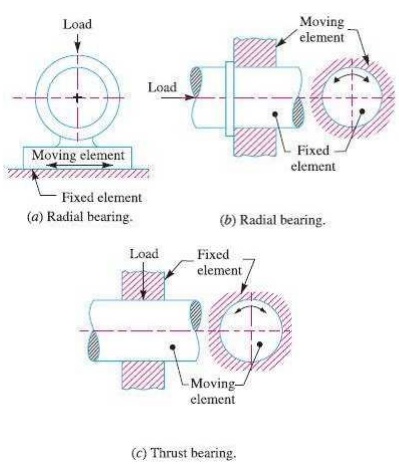 1.2 Depending upon the nature of contact. The bearings under this group are classified as:

In rolling contact bearings, as shown in Fig (b), the steel balls or rollers, are interposed between the moving and fixed elements. The balls offer rolling friction at two points for each ball or roller.

When a partial journal bearing has no clearance i.e. the diameters of the journal and bearing are equal, then the bearing is called a fitted bearing, as shown in Fig (c). The sliding contact bearings, according to the thickness of layer of the lubricant between the bearing and the journal, may also be classified as follows:

Low starting and running friction except at very high speeds.

Low cost of maintenance, as no lubrication is required while in service.

Easy to mount and erect.

Following are the two types of rolling contact bearings: 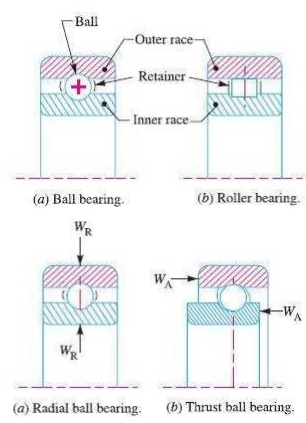 The ball and roller bearings consist of an inner race which is mounted on the shaft or journal and an outer race which is carried by the housing or casing. In between the inner and outer race, there are balls or rollers as shown in Fig.

A number of balls or rollers are used and these are held at proper distances by retainers so that they do not touch each other. The retainers are thin strips and is usually in two parts which are assembled after the balls have been properly spaced. The ball bearings are used for light loads and the roller bearings are used for heavier loads. The rolling contact bearings, depending upon the load to be carried, are classified as: