Take water in a beaker and drop an iron ball and a cork bowl into the water.

Take water in a beaker and drop an iron ball and a cork bowl into the water. What do you observe? The iron ball sinks and the cork floats as shown in figure. Can you explain why? If your answer is “heavy objects sink in water and lighter objects float is water”, then, why does a metal coin sink in water whereas a much heavier wooden log floats? These questions can be answered when we understand the concept of density. 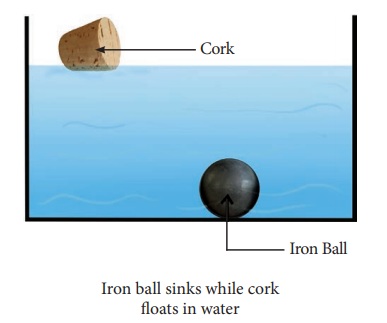 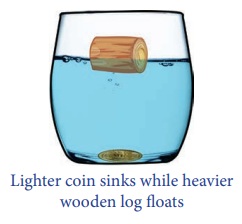 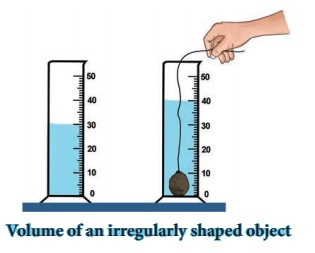 The lightness or heaviness of a body is due to density. If more mass is packed into the same volume, it has greater density. so , the iron block will have more mass than the wooden block of the same size. Therefore iron has more density.

Density of a substance is defined as the mass of the substance contained in unit volume (1 m3).

If the mass of a substance is “M” whose volume is “V”, then, the equation for density is given as

a. Take an iron block and a wooden block of same mass (say 1kg each). Measure their volume. Which one of them has more volume and occupies more volume?

b. Take an iron block and a wooden block of same size. Weigh them and measure their mass. Which one of them has more mass?

The density of some widely used materials are listed in the following table 1.4.

Table 1.4 Density of some common substances, at room temperature 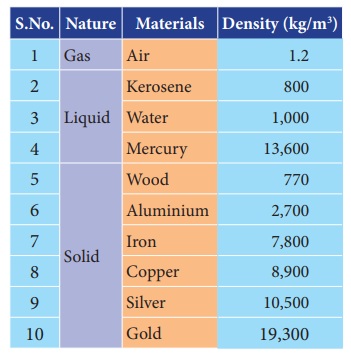 Suppose you have one Kg of iron and gold, which of them would have more volume than the other? Give your reason.

A solid cylinder of mass 280 kg has a volume of 4 m3. Find the density of cylinder.

The relationship between Mass, density and volume are represented in the following density triangle: 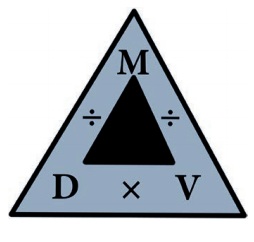 Relationship between density, mass and volume