Domestic and to a lesser extent the industrial use of electricity cause a number of deaths annually.

Domestic and to a lesser extent the industrial use of electricity cause a number of deaths annually. Most of these deaths are the result of accidents, although suicide by electrocution is also seen.

The effect of the exposure of the body to an electrical current will be influenced by a number of factors:

The features of electrical current

·              The type of current (alternating current [AC] versus direct current [DC]). The human body is four to six times more susceptible to an alternating current than to a direct current. It is especially low frequencies between 39 to 150 cycles per second (39±150 Hertz) which are dangerous. The higher the frequency, the less dangerous the current. It is important to remember that household electricity is usually 50 to 60 Hertz!

·              The strength of the current, measured in ampere. The higher the current, the more dangerous. A current of 1 mA (milli-amperes) will only result in a sensation of shock, while a current of 15,0 mA will result in contraction of the muscles and the person will not be able to release the wire. As a matter of interest, the same principle underlying the so-called pugilistic or boxer posture in charred bodies plays a role in this situation: all themuscles in the body contract due to the electrical stimulation, but the flexor muscles (because of their larger mass and therefore power) will dominate. This results in closure of the hand, and the wire is therefore tightly grasped. Death due to abnormal heart rhythm will occur with exposure to a 70 mA current for 5 seconds, 300 mA for 0,3 seconds and 1 800 mA for 0,01 seconds.

·              The tension or voltage. High voltage is less dangerous than low voltage. In the case of very high-tension currents, an electrical arc flame or spark can cause burns even though the body is not in direct contact with the wire. High-tension currents tend to throw the individual away from the current (wire), which decreases the contact time.

·              The time exposed to the current. The longer the current flows through the body, the more extensive the damage will be.

The features of the body

·              The resistance of the body. Water is a very good conductor of electricity. Contact with an electric current with wet (eg sweaty) hands lowers the resistance and therefore increases the amount of electricity flowing to the body. It will also be increased if the person is earthed on a wet surface, for instance standing barefoot on wet cement. 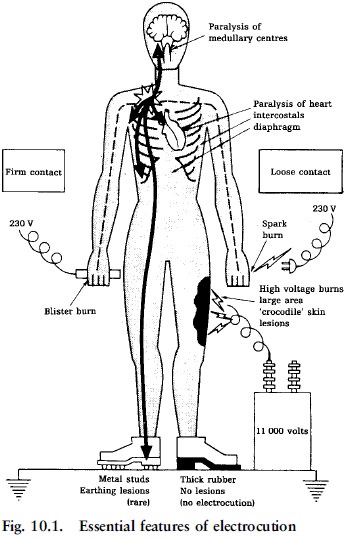 ·              Underlying pathology. People with heart diseases are more vulnerable to the effect of an electrical current than others. Ironically, electrical energy is used in controlled conditions to treat abnormal heart rhythms.

Causes of death may either result in instantaneous death or death at a later stage due to complications. It is therefore possible that the person may survive initially and walk some distance after having been exposed to an electrical current, but then collapses and dies due to an abnormal heart rhythm.

1.           Abnormal heart rhythm (arrhythmia), especially ventricular fibrillation. In this condition the heart contracts in an unco-ordinated manner, with no forward propulsion of blood. It therefore results in cardiac arrest.

2.           Respiratory failure due to contraction of the thoracic muscles (muscles of the chest) and diaphragm. This is due to stimulation of the muscle by the electric current causing spasm, so that the person cannot inhale of exhale.

Other injuries include burns with high-tension electricity currents, with the presence of arc burns, and head injuries, which may occur when the person is thrown from a ladder after receiving an electrical shock.

The post-mortem signs (excluding the burns and other injuries which we already discussed) due to electrical current may be minimal and can easily be overlooked, especially if they are in obscure places. In cases where the resistance of the skin is very low, for instance due to being wet, the contact wound may even be absent. The entrance or contact wound is usually found on the hands, and the exit wounds on the soles of the feet.

The skin wounds are caused by heat production. The epidermis resists the flow of the electrical current. The remainder of the body tissue consists of water and electrolytes (salts), which are an ideal conduction medium. Due to resistance to the flow of the electrical current, the skin is heated, and this heat production creates a characteristic wound. The epidermis becomes white and sometimes surrounds a vesicle containing fluid caused by production of steam under the skin as it is heated by the current flowing through the tissue with a high resistance (compare this with the principle applying to a kettle). Histologically the cells of the basal layer of the epidermis are distorted. This appearance is also known as Joule's wounds. When the contact is less firm, small sparks may jump over the gap. This results in a spark lesion consisting of a hard, brown nodule on the skin.

With special examination techniques the deposit of metal particles (metalisa-tion) may be seen at the entrance wound.

Some authors have also noted that in an individual previously exposed to electrical current, and who has survived, calcifications may develop in the underlying tissue. This may be of importance in cases of alleged torture with electricity.

In the case of lightning a powerful electrical current acts over a very short period of time.

The post-mortem signs in a lightning victim may include the following:

1.           A fernlike or arborescent distribution of red or erythematous marks on the body surface. Lightning usually occurs when the atmosphere is humid or during rain storms. The wet body is drenched in water, which accumulates in the body folds. It is along these ``paths'' of least resistance that the electrical current will spread over the skin surface, with only slight burning of the skin. This presents as arborising red lines.

3.           The shoes and clothes may be ripped from the body. This can raise suspicion that the vicim was raped.

As a matter of interest, any metal objects on the body, for instance the buckle of a belt or coins, can become magnetised and act like a magnet.