TCP/IP-style networking is appropriate for most networking needs. It provides a serialized, predictable, reliable stream of packet data.

TCP/IP-style networking is appropriate for most networking needs. It provides a serialized, predictable, reliable stream of packet data. This is not without its cost, however. TCP includes many complicated algorithms for dealing with congestion control on crowded networks, as well as pessimistic expectations about packet loss. This leads to a somewhat inefficient way to transport data. Datagrams provide an alternative.

Datagrams are bundles of information passed between machines. They are somewhat like a hard throw from a well-trained but blindfolded catcher to the third baseman. Once the datagram has been released to its intended target, there is no assurance that it will arrive or even that someone will be there to catch it. Likewise, when the datagram is received, there is no assurance that it hasn’t been damaged in transit or that whoever sent it is still there to receive a response.

DatagramSocket defines many methods. Two of the most important are send( ) and receive( ), which are shown here:

The send( ) method sends a packet to the port specified by packet. The receive( ) method waits for a packet to be received and returns the result.

DatagramSocket also defines the close( )method, which closes the socket. Beginning with JDK 7, DatagramSocket implements AutoCloseable, which means that a DatagramSocket can be managed by a try-with-resources block.

Other methods give you access to various attributes associated with a DatagramSocket. Here is a sampling:

int getLocalPort( ) : Returns the number of the local port.

boolean isBound( ) : Returns true if the socket is bound to an address. Returns false otherwise.

boolean isConnected( ) : Returns true if the socket is connected to a server. Returns false otherwise.

The first constructor specifies a buffer that will receive data and the size of a packet. It is used for receiving data over a DatagramSocket. The second form allows you to specify an offset into the buffer at which data will be stored. The third form specifies a target address and port, which are used by a DatagramSocket to determine where the data in the packet will be sent. The fourth form transmits packets beginning at the specified offset into the data. Think of the first two forms as building an "in box," and the second two forms as stuffing and addressing an envelope.

DatagramPacket defines several methods, including those shown here, that give access to the address and port number of a packet, as well as the raw data and its length. 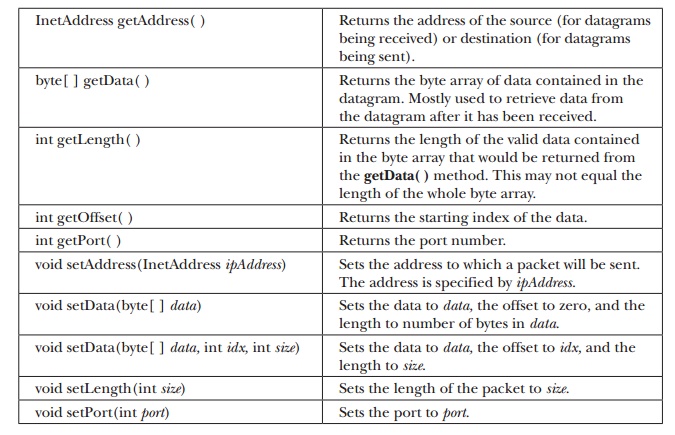 byte[ ] getData( ) : Returns the byte array of data contained in the datagram. Mostly used to retrieve data from the datagram after it has been received.

int getOffset( ) : Returns the starting index of the data.

void setAddress(InetAddress ipAddress) : Sets the address to which a packet will be sent. The address is specified by ipAddress.

void setData(byte[ ] data) : Sets the data to data, the offset to zero, and the length to number of bytes in data.

void setData(byte[ ] data, int idx, int size) : Sets the data to data, the offset to idx, and the length to size.

void setLength(int size) : Sets the length of the packet to size.

The following example implements a very simple networked communications client and server. Messages are typed into the window at the server and written across the network to the client side, where they are displayed.

This sample program is restricted by the DatagramSocket constructor to running between two ports on the local machine. To use the program, run

in one window; this will be the client. Then run

This will be the server. Anything that is typed in the server window will be sent to the client window after a newline is received.