Chapter: Civil : Repair and Rehabilitation of Structures : Techniques for Repair and Demolition

A corrosion inhibitor is an admixture that is used in concrete to prevent the metal, embedded in concrete form cording. There exists various types of inhibitors like Cathode, Anode, mixed and Dangerous, Safe.

Of the available corrosion inhibiting materials, the most wide used admixture is based on calcium nitric. It is added to the concrete during mixing of concrete. The typical dosage id of the order of 10-30 litres per m3 of concrete, depending on the chloride levels in concrete.

In the high pH of concrete the steel is protected by a passivating layer of ferric oxide, on the surface of steel. (passivation may be defined as 'phenon enon in which a metal or an alloy

exhibits a much higher corrosion resistance, than expected from its positon in the electrochemical series.

Passivity is the result of the formation of a highly protective, but very thin, (about 0.0004mm thick) and quite invisible film on the surface of metal or an alloy, which makes it more fine). However, the passivating layer also contains some ferrous oxide, which can initiate corrosion, when the chloride ions reach the steel. The nitrite ions present in the corrosion inhibiting admixture will oxidize the ferrous oxide

Passivating layer even in the presence of chlorides. The concentration of nitrite must be sufficient, to cope up with the continuing ingress (entrance) of chloride ion.

Since most structures in a chloride environment reach a leyel of about 7 Kg of chloride iron per m3 during their service life, use of less than 18 litres/m3 of calcium nitrite solution is not recommended.

Figure shows that without an inhibitor, the reinforcing steel starts to corrode, when the chloride content at the rebar reaches a threshold level of 0.7Kg/m3. Although the corrosion process starts when the thereshold level is reacted, it may take several years for staining, cracking & spalling to become apparent, (clear) and several more years before deterioration occurs.

Adding calcium nitrite increases this corrosion thereshold. When you ass 20 litres/m3, corrosion will not begin until over 7.7 Kg/m3 of chloride is present in the concrete at the rebar. 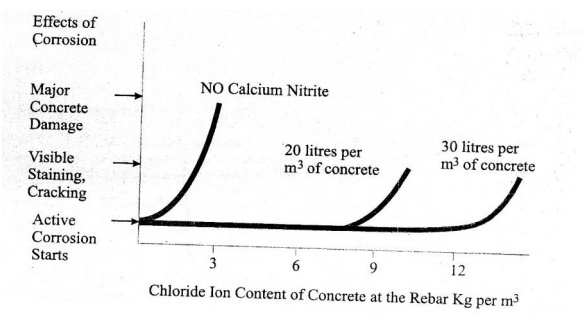