Many scientists contributed to the science of Microbiology from the 17th century to the present day.

Many scientists contributed to the science of Microbiology from the 17th century to the present day. Some prominent microbiologists who have made significant contribution to the study of microorganisms are given below:

Antony Van Leeuwenhoek (1632-1723) of Holland (Figure 1.1) developed microscopes. He was a Dutch merchant and a skilled lens maker. He made a variety of lenses with magnifying power 50-300X.

He was the first person to invent simple microscope. It has a single biconvex lens with a magnification of about 200X (Figure 1.2). His microscopes resolved bodies with diameters measuring below 1micron. He examined water, mud, saliva and found living organisms. He called these microorganisms as Animalcules (little animals). Bacteria like cocci, bacilli and spirochetes were recognized. He proposed that the size of bacteria is one sixth the diameter of Red Blood Cells.

He observed the growth of bacteria in infusions. The existence of spermatozoa and RBC was revealed by him. Animal histology was established by him. He described capillary circulation and added a new dimension to Biology. All kinds of unicellular microorganisms were accurately described by him including human oral microbial flora. He is commonly known as the ‘Father of Microbiology’.

Louis Pasteur was a French chemist and a crystallographer (Figure 1.3). His greatest contribution to microbiology made him to be the ‘Father of Modern Microbiology’.

Contribution to science as a chemist

Louis Pasteur was working with tartaric acid crystals. He could pick up the dextro and levo rotatory crystals by seeing the morphology of the crystals. Later he was called to solve some of the problems in fermentation industry and turned his attention to biological process of fermentation. 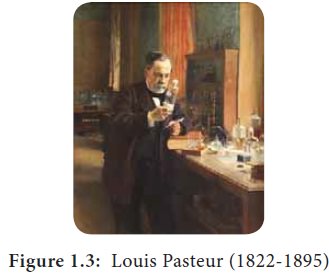 Louis Pasteur discovered alcohol production from grape juice was due to yeast. The presence or contamination of rod shaped bacteria resulted in large amounts of lactic acid production in wine. He also found that microorganisms in fermented fruits and grains, resulting in alcohol production. He coined the term “fermentation”.

Louis Pasteur used heat to destroy undesirable microbes in fruit juices. He employed 62.8°C (145°F) for 30 mins to kill microbes. This process is called Pasteurization which is commonly used in distillaries and dairy industry.

Louis Pasteur found that Pebrine disease in silk worm was caused by a protozoan parasite. He suggested that Pebrine disease could be eliminated by using only healthy, disease free silk worms. Wool Sorter’s disease was named as “Anthrax” by him. He isolated Bacillus anthracis from the blood of infected animals. Chicken cholera bacterium was also isolated by Louis Pasteur using pure culture. 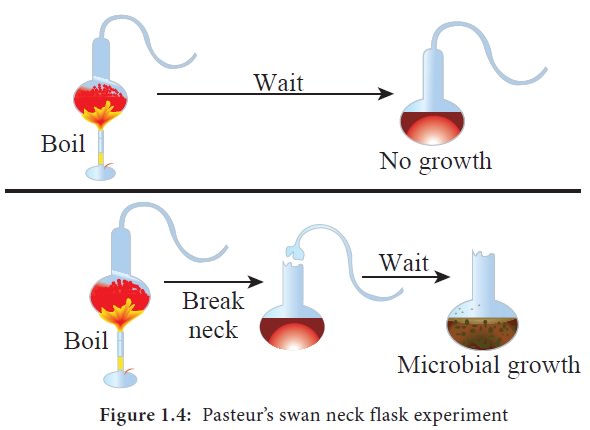 He proved that many diseases were caused by the presence of foreign microorganisms (Germ theory of disease). He discovered various infection causing microorganisms such as Staphylococcus, Streptococcus and Pneumococcus.

Pasteur found out that bacteria could be attenuated by growing them in unnatural conditions. He coined the term “attenuation”. It is a process wherein bacteria lose their virulence due to repeated subculturing under laboratory conditions. He used attenuated cultures as vaccines for immunizing and protecting an individual against the disease. He developed vaccines for anthrax and rabies.

In ancient observation, persons who had suffered from a specific disease such as small pox (causative agent of small pox is varicella virus) or mumps, resisted the infection on subsequent exposures. They rarely contracted these infections for second time. Edward Jenner, a country doctor in England noted a pustular disease on the hooves of horses called the grease. This was carried by farm workers to the nipples of cows (cow pox). This was again carried by milk maids. They got inflamed spots on the hands and wrists. The people who got this cow pox were protected from small pox. He reported that 16 farm workers who had recovered from cow pox (causative agent of cow pox is vaccinia virus) were resistant to small pox infection.

He took the material (pus) from the cow pox and inoculated into the cut of 8 year old boy on 14th May 1796 (Figure 1.5). Two months later Jenner inoculated the same boy with material taken from small pox patients. This was a dangerous but accepted procedure at that time. This procedure was called variolation. The boy was protected against small pox. His exposure to the mild cow pox disease had made him immune to the small pox disease. In this manner Jenner began the Science of Immunology, the study of the body’s response to foreign substances. Edward Jenner was regarded as the ‘Father of Immunology’. 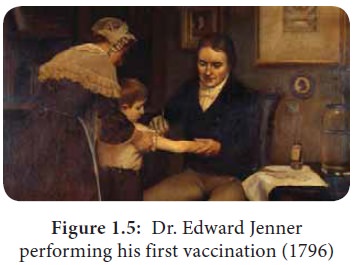 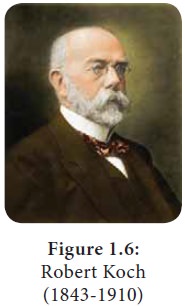 For the first time he showed the evidence that a specific germ (Anthrax bacillus) was the cause of a specific disease (splenic fever in sheep) and introduced scientific approach in Microbiology.

He modified Ziehl-Neelsen Acid Fast staining procedure which was introduced by Ehrlich. He devised solid medium to grow microorganism. He developed powerful method to isolate the microorganisms in pure culture from diseased tissue. He also perfected the techniques of identification of the isolated bacteria.

He introduced Koch’s thread method to find out the efficacy of disinfectants. He established certain rules that must be followed to establish a cause and effect relationship between a microorganism and a disease. They are known as Koch’s Postulates. He also described the Koch’s Phenomenon. He was regarded as the ‘Father of Medical Microbiology’.

Four criteria were established by Robert Koch to identify the causative agents of an infectious disease. These include

1. A specific organisms can always be found in association with a given disease. If we take typhoid as an example it is caused by a bacterium Salmonella typhi.

2. The organism can be isolated and grown in pure culture in the laboratory. Salmonella typhi are grown in soild media under laboratory conditions.

3. The pure culture will produce the diseases when inoculated into a susceptible animal.

4. It is possible to recover the organism in pure culture from the experimentally infected animals and it is observed to be the same as originally inoculated pathogen. Figure 1.7 explains the Koch’s postulates.

Some organisms have not yet been grown in artificial culture media

Today we recognize additional criteria of causal relation between a microorganism and a disease. The important one is the demonstration of abnormally high concentration of specific circulating antibodies to the organism in the infected host or the presence of abnormally high degree of specific immunity or hypersensitivity to the infecting agent in a recently recovered host. In addition to culture techniques, serological techniques are also used for diagnosis of diseases. 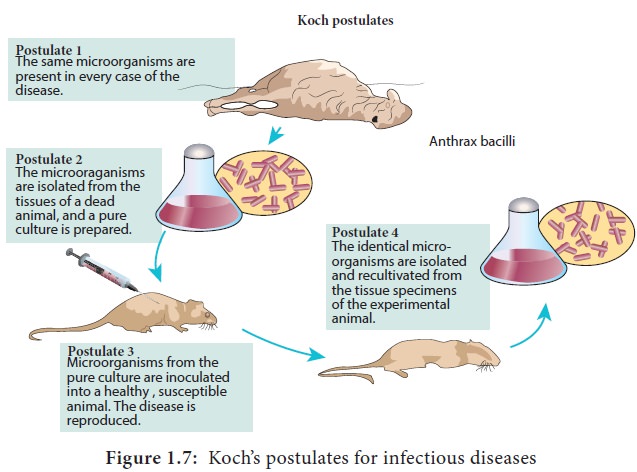 Joseph Lister was a British surgeon (Figure 1.8). He found out that microorganisms were responsible for wound infections. He developed s system of antiseptic surgery. He used bandages Joseph Lister soaked in phenol (1827-1912) solution to prevent wound  infection. He sterilized instruments by heat and sprayed diluted phenol over surgical area and prevented contamination of wounds. He was the first person to isolate bacteria in pure culture using liquid culture. Thus, he was considered as co-founder of Medical Microbiology with Koch, who later isolated bacteria on solid media. 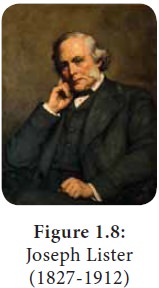 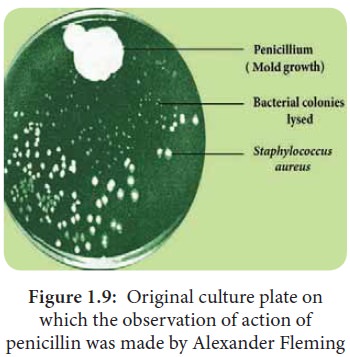 He also showed that the culture filtrate of mold inhibited the growth of Staphylococcus aureus. He called this substance Penicillin, which acted on Gram positive bacteria. For the discovery of this antibiotic Fleming (Figure 1.10), Florey and Chain got Nobel Prize in 1945. Penicillin eventually came into use during world war II as a result of the work of a team of scientists led by Howard Florey of the University of Oxford. 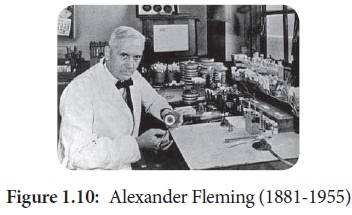 Waksman was from Rutger University, USA (Figure 1.11). His research was largely on soil microorganisms. He showed antimicrobial activity of streptomyces that led to the discovery of Streptomycin and several other antibiotics. 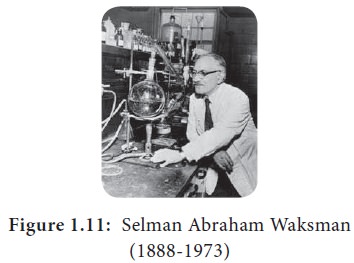