Currently, commercial data mining tools use several common techniques to extract knowledge. These include association rules, clustering, neural networks, sequencing, and statistical analysis. We discussed these earlier. Also used are decision trees, which are a representation of the rules used in classification or clustering, and statistical analyses, which may include regression and many other techniques. Other commercial products use advanced techniques such as genetic algorithms, case-based reasoning, Bayesian networks, nonlinear regression, combinatorial optimization, pattern matching, and fuzzy logic. In this chapter we have already discussed some of these.

Most data mining tools use the ODBC (Open Database Connectivity) interface. ODBC is an industry standard that works with databases; it enables access to data in most of the popular database programs such as Access, dBASE, Informix, Oracle, and SQL Server. Some of these software packages provide interfaces to specific data-base programs; the most common are Oracle, Access, and SQL Server. Most of the tools work in the Microsoft Windows environment and a few work in the UNIX operating system. The trend is for all products to operate under the Microsoft Windows environment. One tool, Data Surveyor, mentions ODMG compliance; see Chapter 11 where we discuss the ODMG object-oriented standard.

Most of the tools run in a graphical user interface (GUI) environment. Some products include sophisticated visualization techniques to view data and rules (for example, SGI’s MineSet), and are even able to manipulate data this way interactively. Text interfaces are rare and are more common in tools available for UNIX, such as IBM’s Intelligent Miner.

In Table 28.1 we list 11 representative data mining tools. To date, there are almost one hundred commercial data mining products available worldwide. Non-U.S. products include Data Surveyor from the Netherlands and PolyAnalyst from Russia.

Data mining tools are continually evolving, building on ideas from the latest scientific research. Many of these tools incorporate the latest algorithms taken from artificial intelligence (AI), statistics, and optimization.

Currently, fast processing is done using modern database techniques—such as distributed processing—in client-server architectures, in parallel databases, and in data warehousing. For the future, the trend is toward developing Internet capabilities more fully. Additionally, hybrid approaches will become commonplace, and processing will be done using all resources available. Processing will take advantage of both parallel and distributed computing environments. This shift is especially important because modern databases contain very large amounts of information. Not only are multimedia databases growing, but also image storage and retrieval are slow operations. Also, the cost of secondary storage is decreasing, so massive information storage will be feasible, even for small companies. Thus, data mining pro-grams will have to deal with larger sets of data of more companies.

Most of data mining software will use the ODBC standard to extract data from business databases; proprietary input formats can be expected to disappear. There is a definite need to include nonstandard data, including images and other multimedia data, as source data for data mining. 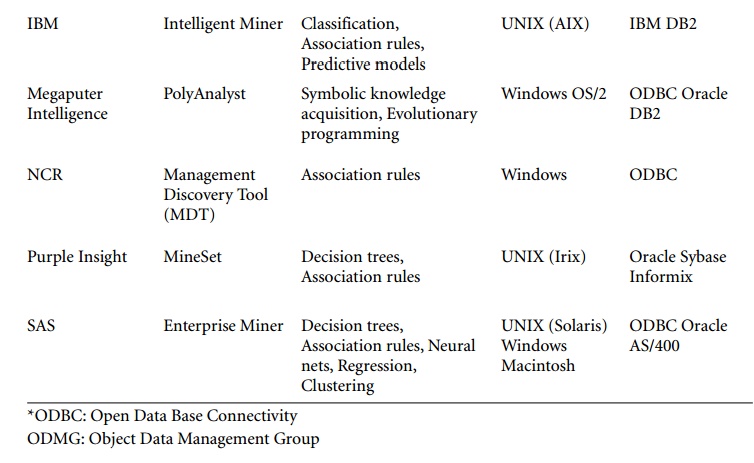