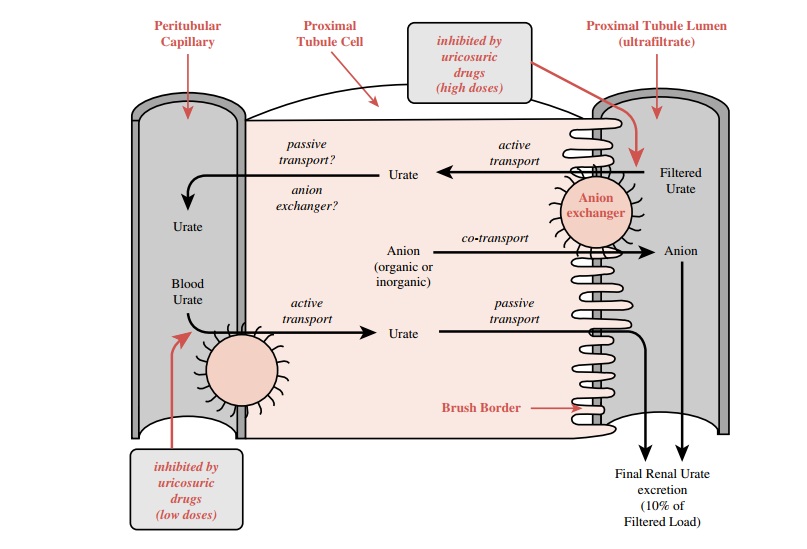 Gouty inflammation of the tissues or joints is associated with local accumulation of urate microcrystals by the phagocytic neutrophils.

Gouty inflammation of the tissues or joints is associated with local accumulation of urate microcrystals by the phagocytic neutrophils. After sufficient amounts of these crystals have been taken up into the phagolyso-somes of the neutrophil, these organelles disrupt and release their degradative enzymes, accumulated micro-crystals (which may be rephagocytized), and chemotac- tic factors. It is these released substances that are re-sponsible for much of the local inflammation and pain associated with acute attacks of gout.

Colchicine, an alkaloid obtained from the autumn crocus, has long been used and is relatively selective for the treatment of acute gouty arthritis. Unlike many of the newer agents for use in gout, colchicine has minimal effects on uric acid synthesis and excretion; it decreases inflammation associated with this disorder. It is thought that colchicine somehow prevents the release of the chemotactic factors and/or inflammatory cytokines from the neutrophils, and this in turn decreases the attraction of more neutrophils into the affected area (Fig. 37.1). The ability of colchicine to bind to leukocyte microtubules in a reversible covalent complex and cause their de-polymerization also may be a factor in decreasing the attraction of the motile leukocytes into the inflamed area. 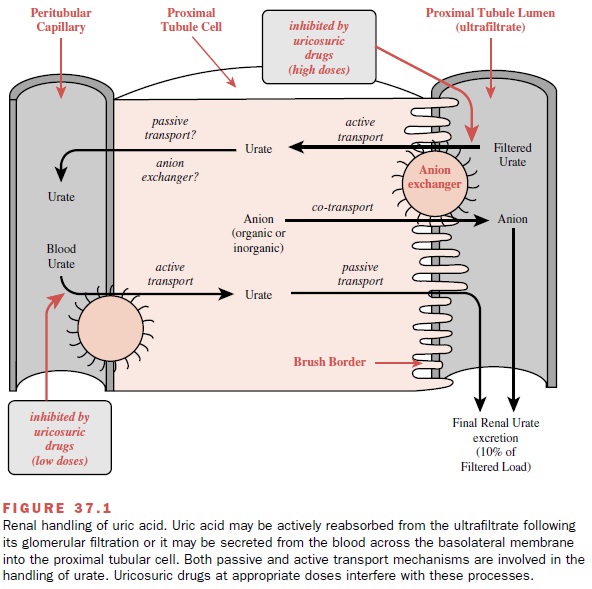 Colchicine is rapidly absorbed after oral administra-tion and tends to concentrate in the spleen, kidney, liver, and gastrointestinal tract. Leukocytes also avidly accumulate and store colchicine even after a single in-travenous injection. Since colchicine can accumulate in cells against a concentration gradient, it is postulated that an active transport process may be involved in its cellular uptake. The drug is metabolized, primarily in the liver, by deacetylation. Fecal excretion plays a major role in colchicine elimination, since it and its metabo-lites are readily secreted into the bile. Only about 15 to 30% of the drug is eliminated in the urine except in pa-tients with liver disease; urinary excretion is more im-portant in these individuals.

The major use of colchicine is as an antiinflammatory agent in the treatment of acute gouty arthritis; it is not ef-fective in reducing inflammation in other disorders. It also can be used to prevent attacks. Since colchicine is so rap-idly effective in relieving the acute symptoms of gout (substantial improvement is achieved within hours), it has been used as a diagnostic aid in this disorder.

Therapy with colchicine is usually begun at the first sign of an attack and is continued until symptoms sub-side, adverse gastrointestinal reactions appear, or a maximum dose of 6 to 7 mg has been reached. The drug can be given intravenously as well as orally, but care must be exercised, since extravasated drug may result in local sloughing of skin and subcutaneous tissues. Relief of pain and inflammation usually occurs within 48 hours. Small doses of colchicine can be used during asymptomatic periods to minimize the reappearance or severity of acute attacks. It should be used with caution in patients with preexisting compromised heart, kidney, gastrointestinal tract, and liver disease.

Diarrhea, nausea, vomiting, and abdominal pain are the major limiting side effects that ultimately determine the tolerated dosage. These symptoms occur in approx-imately 80% of patients who take colchicine, especially in those taking high dosages.

The hepatobiliary recy-cling of colchicine and its antimitotic effect on cells that are rapidly turning over, such as those of the intestinal epithelium, account for its gastrointestinal toxicity. Gastrointestinal symptoms generally intervene before the appearance of more serious toxicity and thereby provide a margin of safety in drug administration. Ingestion of large doses of colchicine may be followed by a burning sensation in the throat, bloody diarrhea, shock, hematuria, oliguria, and central nervous system (CNS) depression.