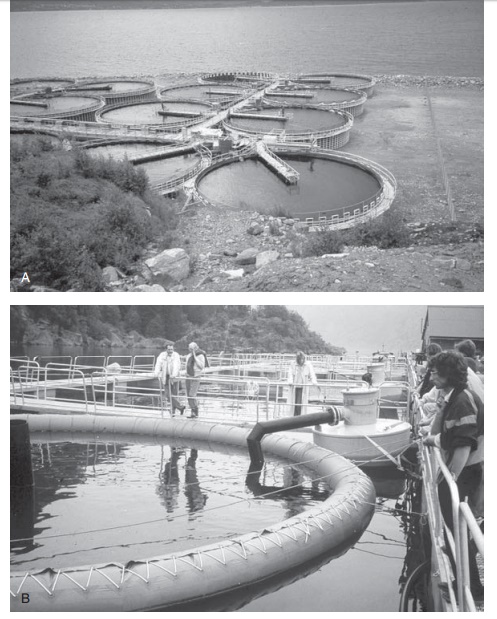 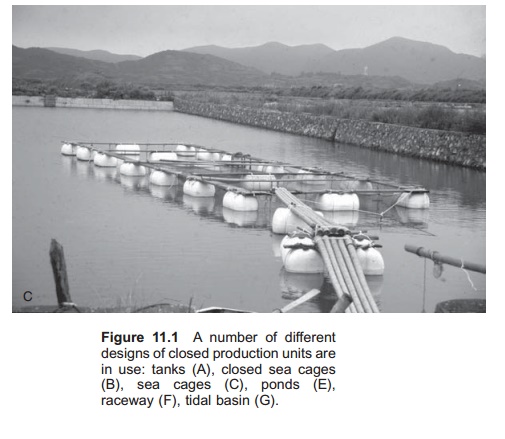 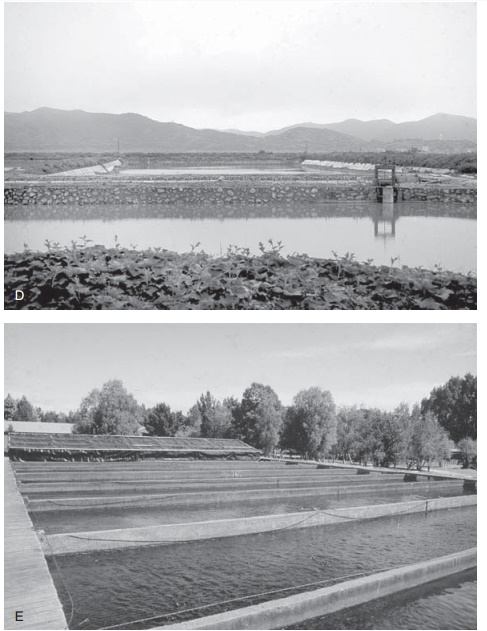 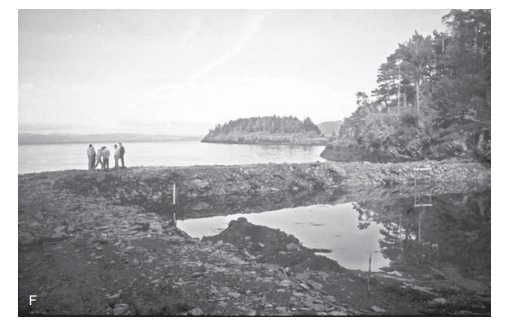 One classification of production systems described, is intensive, semi-intensive and extensive. The same can be used for the production units. In extensive units the biomass is lower than is normally the case for cultivation. An example of a very extensive rearing unit is the utilization of small lakes for fish farming purposes. Before use the lakes should be cleared of natural predators. In use, fry, for instance, can be released and harvesting can be done with a seine net when the fish have reach the required size. In dry periods such systems may be run without any water or oxygen supply, the only available oxygen being that produced by photosynthesis occurring in the lake. No food is supplied, the only food is that naturally produced. More advanced and intensive is the use of artificially created ponds (excavated or embankment ponds). At low density such systems may also be run without any supply of water, the ecosystem in the pond ensuring proper water quality in the pond. However, when artificial feeding of the fish in the pond is commenced, it is necessary to increase the oxygen supply and remove the waste products, thus gradually progressing to more intensive systems. Tanks allowing high fish density represent intensive production units.

Another way to create simple and quite extensive rearing units is to fence in a water volume, either in lakes, rivers or the sea, and so create a restricted volume (a pen) where fish or other aquatic organ-isms can be reared. Normally the fence is made of net or wire, but the use of electric barriers has also been proposed. If using a net, the fence may be established by means of a post planted in the ground. The area that is fenced in will vary with the geographical conditions, amongst other things. For example, by restricting an area in the sea between two narrow necks of water may create a very large farming volume. Dams of natural earth masses or concrete may also be used to restrict small natural bays and give a low cost production volume.

Classification can also be based on the possibilities for controlling the environment inside the production unit. If the bottom or walls are made of fixed materials such as concrete, steel or plastic, control over the water environment may be possible, as in a closed production unit. In addition, a light-tight insulated superstructure will give full control of the environment. Cages floating in sea-water represent an open production unit where full control of environmental factors is impossible; the only factor that is controlled is that the fish are colleted in a restricted area. However, if the cage is closed with a tarpaulin, for example, more control will be possible (Fig 11.2). 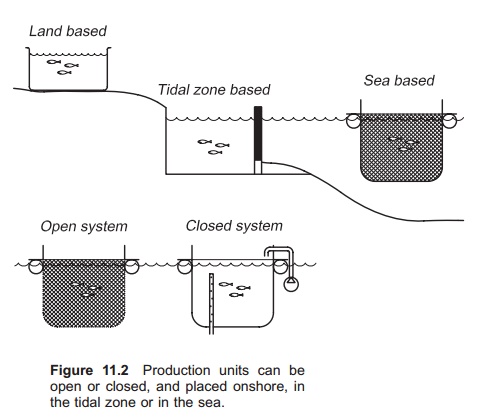 Units can also be classified depending of where they are placed: 1, on land; 2, in the tidal zone; 3, in the water (sea or freshwater) (Fig. 11.2). On land the units will be closed. The water supply and exchange is either gravitational or pumped.

Units in the tidal zone are normally closed, but may also be open. In the second case the water level in the unit wills vary according to the tide. If the unit is closed the water may either be pumped or the tide can be used to ensure water supply and exchange. If using the tide there can be a batch exchange, meaning exchange only occurs when the tide is high. Specially designed valves may also be used either taking in only surface water or only taking in bottom water (Fig. 11.3).

Sea-based farms float in the water, normally on the surface, but submerged units may also be used. 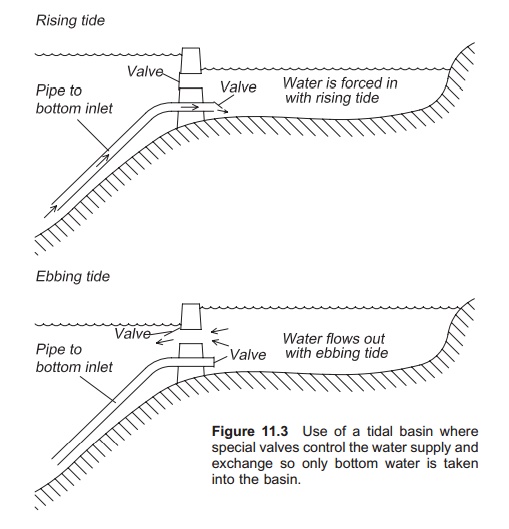 Normally they have an open construction, like sea cages, where water supply and exchange is ensured by the natural currents. However, the units can also be closed with sealed walls and bottom (Fig. 11.2), in which case a pump must be used to ensure water supply and exchange. The advantage with such systems compared to land-based units is that the pumping head is reduced.

If freshwater is fed into a seawater pond, because of the density difference, it will form a layer on the top of the seawater for a period of time. This can be utilized in specially designed production units for Artic charr farming during the winter because they do not then tolerate full salinity. A freshwater/ brackish layer can be kept in a sea cage by having a tarpaulin skirt in the upper part of the net bag walls with an open lower netted part and sending freshwater in through a pipe (Fig. 11.4). 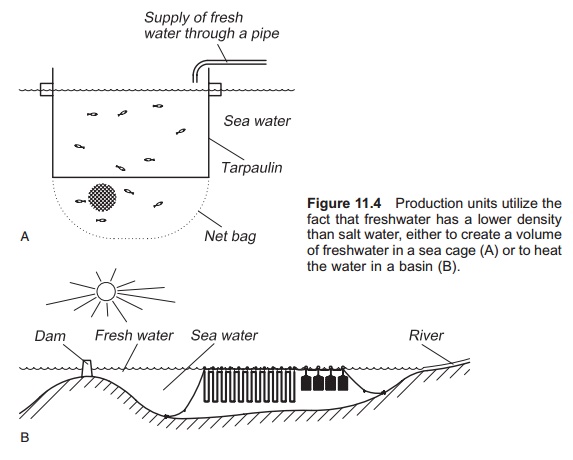 Another way that this density gradient can be utilized is by sending freshwater into a closed lagoon or basin of seawater. Because of the density difference the freshwater will float on top in a separate layer and a ‘greenhouse effect’ can be achieved. Heat radiation will go down to the seawater, but the reflection is reduced because of the border layer between the saltwater and freshwater so the temperature of the seawater in the basin will increase more than that of the freshwater on the surface. This principle can be used for oyster spat farming in the northern hemisphere, for example (Fig 11.4).