Blunt trauma comprises a spectrum of wounds, such as contusions (bruises), abrasions and laceration wounds resulting from blunt forces. This is also thesequence in which these wounds appear as the violence increases, in other words the first wound is a contusion, when the small blood vessels in the soft tissue in the subcutaneous region tear. With more violence the epidermis of the skin will be lost, either partially or completely, and an abrasion will appear. With even more violence the epidermis and the underlying subcutaneous tissue will tear, resulting in a laceration.

Contusions or bruises are the result of damage to small blood vessels in the subcutaneous tissue, which then rupture, with subsequent extravasation of red blood cells (red blood cells leaking out of the blood vessels into the surrounding soft tissue). Very small pin-point contusions are also known as petechiae. Larger contusions are also called ecchymosis. A haematoma is an even larger contusion where the blood collects in a cavity formed in the damaged tissue.

The extent of a contusion is influenced by a number of factors:

·              The anatomical structure of the tissue. If the skin is well supported by the underlying tissue, only a limited space exists in which the red blood cells can accumulate outside the blood vessels (extravasation). This is the reason why the palms of the hands as well as the sole of the feet are often the preferred sites to which violence is applied during torturing, as it will be less obvious. Contusions appear more readily in fatty tissue; this is one of the reasons why females are more easily bruised than males.

·              Other medical conditions and drugs. Certain medicines that dilute the blood cause people to bleed more readily and this increases the extent of the contusions. This is often seen in individuals on anti-coagulation therapy such as Warfarin. Malnutrition (eg scurvy due to vitamin C deficiency) is also a predisposing factor as the bloodvessels are more fragile.

·              Age of the contusions. Contusions develop over a period of time. At first the area may be quite small, but after some hours or days it becomes bigger. It is therefore important in cases of alleged assault (eg sexual offences) to re-examine the living victim a day or two after the assault, as some of the contusions may than be more readily visible.

Contusions undergo a spectrum of colour changes over time as a result of break-down of the blood. In older people contusions take longer to disappear. Several factors influence the tempo of disappearance and colour changes in contusions, and it is therefore important not to be too dogmatic when the age of a contusion is determined. However, in general it can be assumed that a contusion with no colour changes is less than two days old, except in the elderly. It is also of importance to determine whether all contusions are more or less of the same age.

During an autopsy post-mortem colour changes (hypostasis) must not be confused with a contusion. An incision of the skin to determine whether the blood is limited to the blood vessels (hypostasis) or whether it is present in the surrounding tissue (contusion) will give verification.

It is important to know that contusions do not develop post mortem as an active blood circulation is necessary for contusions to develop. Although red-blood cells can leak out of the blood vessels during the post-mortem period, this is limited and forms part of the process of hypostasis or livores mortis. 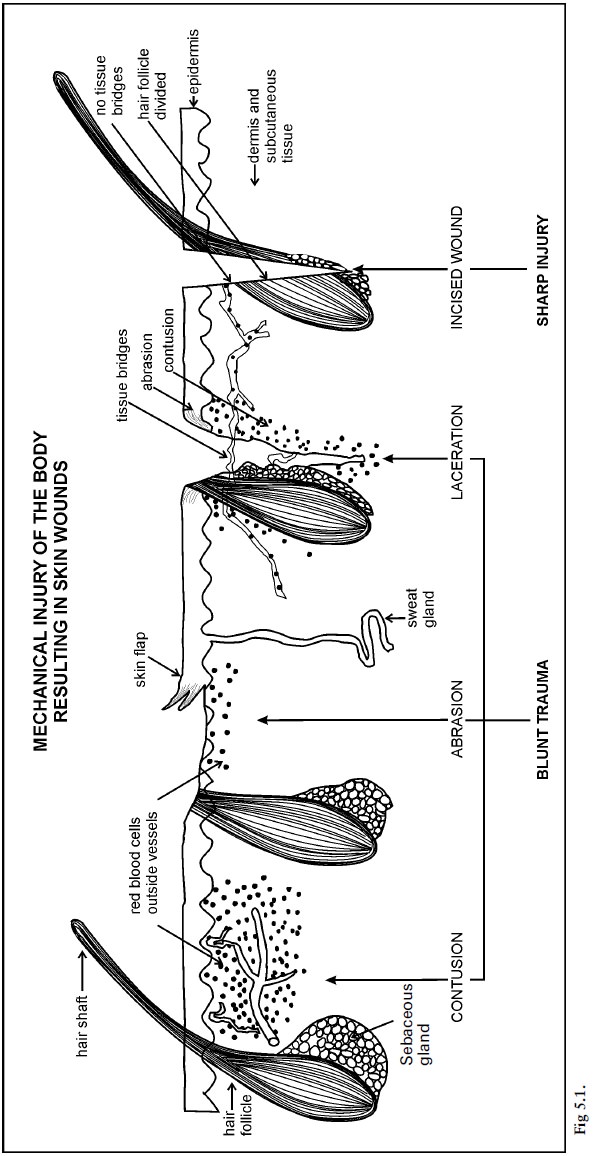 The following are characteristic contusions which can be of assistance in a post-mortem examination:

·              Impression contusion. The shape of the object which caused the contusion, for instance the buckle of a belt or motor vehicle tyre, can be discerned.

·              Tramline contusions (fig 5.2) Typically caused by a cane. During contact of a cane with the body, the skin and tissue in the central aspect are compressed, while some degree of stretching occurs at the border region. In this latter area the blood vessels can tear resulting in two parallel red lines with a white area in between.

·              Abrasion due to fingers and finger tips. These contusions are seen on the limbs of an abused child, the thighs of a rape victim or the neck of a strangulation victim.

·              Contusions caused by teeth. The pattern left by the teeth can assist in identifying an alleged assailant.

·              Contusions due to resuscitation. Substantial force is exerted during cardiac massage, and this can result in contusions of the breast bone (sternum) and even fractures of the bone. 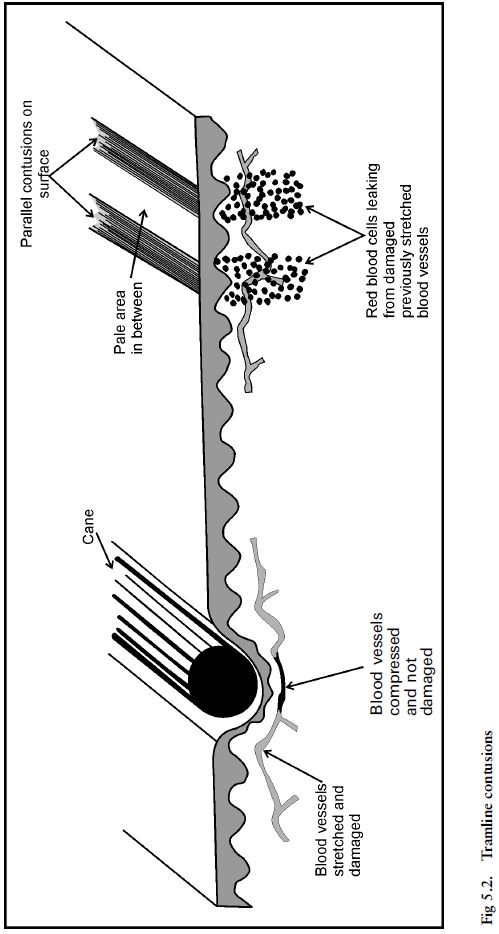 Abrasions occur due to partial or complete loss of the epidermis after violence. If the full thickness of the epidermis is lost, the small blood vessels in the underlying tissue are exposed, and the wound will bleed. It is often possible to determine the direction of force, as the small heaped-up skin fragments will be present in the direction in which the force was applied.

The following types of abrasions occur:

·              Brush abrasions or grazes. These wounds occur due to a force applied horizontally to the surface of the skin, for instance when the body moves over a relatively rough surface such as grass or a tarred road. A so-called grassburn is an example of this type of wound.

·              Impression abrasions. These wounds are similar in origin to impression contusions, but the amount of force is greater and the force is exerted vertical to the skin. The abrasion resulting from a safety belt or steering wheel is an example of this type of wound.

·              Scratch wounds. Scratches are the result of a force applied linearly to the skin, for instance when a fingernail moves over the skin surface. The skin fragments will accumulate in the direction of the force. This type of wound is often seen in assaults. In cases of strangulation with the hands, scratch wounds in the neck may be caused by the assailant as well as the victim. It is therefore important to collect any material below the finger nails of the victim as well as the alleged assailant for forensic analysis, as it may be of assistance in the identification process.

·              Localised friction abrasions. This type of wound is the result of force applied linearly to the skin over a localised area. The energy loss per surface area unit is therefore very high. An example is the wound on the skin of the neck of a hanging victim after removal of the rope. It is also seen in injuries made by a whip (sjambok).

Ante-mortem abrasions are usually covered by a scab. Abrasions arising in the perimortem period often look like parchment, that is dry and leathery. Abrasions can also appear in the post-mortem period, but then they are yellow and transparent with no sign of a tissue response (eg no signs of haemorrhage). Bite marks made by ants can also look like small abrasions.

A lacerated wound has a typical appearance, and differs from an incised wound in the following ways:

Split wounds. This type of wound occurs when the skin is trapped between two hard objects. It often involves the scalp, when the skin is split between a hard object and the underlying skull. In these cases the surrounding abrasion and contusion are often minimal. Sometimes loss of hair can be seen surrounding the wound, due to the abrasion.

Hook lacerations. In this case a sharp object tears the skin and underlying tissue from the body, leaving a linear appearance or angled flap. Animal bite wounds belong to this category.

Subcutaneous tissue lacerations and degloving injuries. These wounds occur when the different skin layers move against each other in such a way that the tissue layers are torn apart. This is also known as decollement injuries. The term ``degloving'' refers to the case where the skin and soft tissue are literally pulled from the body like a glove.

Blunt penetration wounds. This group of wounds comprises a lacerated wound on the surface, with a wound tract extending into the underlying tissue. They are caused inter alia by garden forks, bicycle spokes and screw drivers.

Sharp injuries occur when the force is concentrated on a very small surface area, for instance the edge or tip of a knife. The tissue, and any other structures in the skin, for instance a hair follicle, is transected. If the underlying bone is involved there will be marks on the surface of the bone. This is often seen with panga injuries to the head.

There are two types of sharp injuries, namely incised wounds and stab wounds.

These wounds are not as deep as they are long, and there is no wound track. The location can give an indication of the circumstances in which they occurred. For instance, tentative wounds over the front of the arms and wrist are often seen in suicide cases. Wounds over the back of the forearms often occur when the victim tries to protect him/herself (defence wounds).

These wounds are not as long as they are deep, and there is a wound tract.

A stab wound has certain features: the skin wound looks like an incised wound, and depending on the type of blade, both corners of the wound can be sharp, or the one can be blunt and the other sharp. Sometimes the wound seems to be branching out  -   this happens when the position of the blade is changed while the knife is still in the body. If the whole blade penetrated the body, an abrasion and contusion may be present on the skin where the hilt of the knife hit the body. 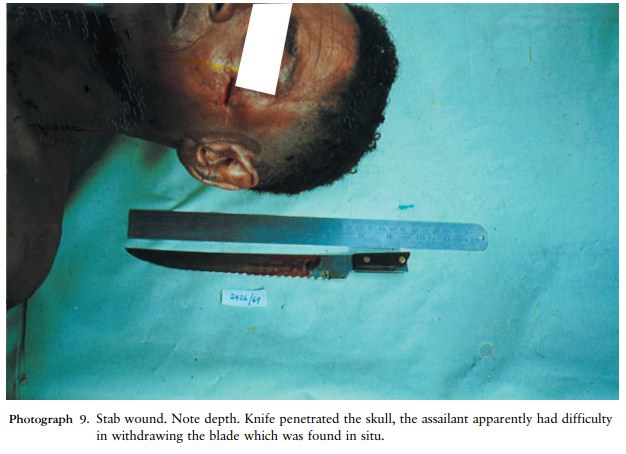 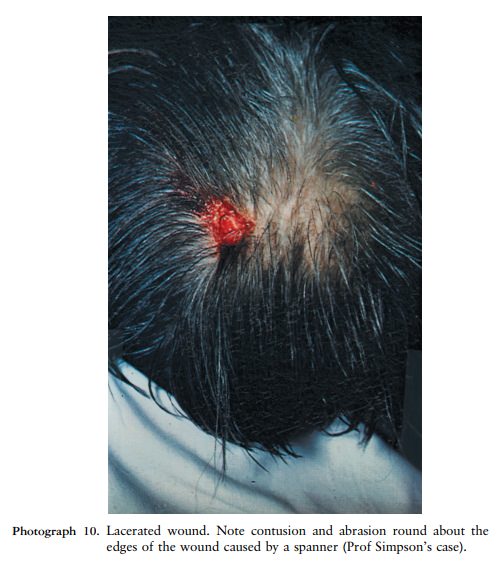 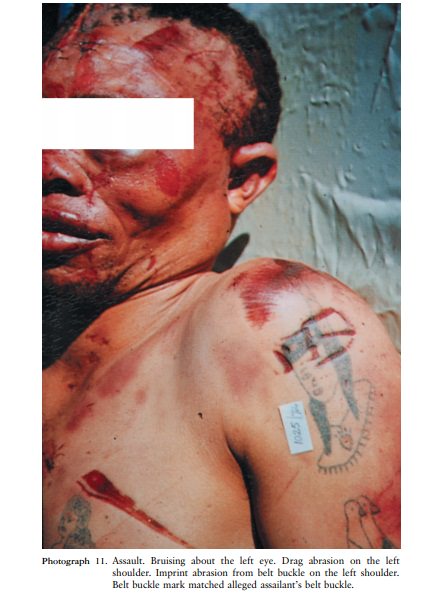 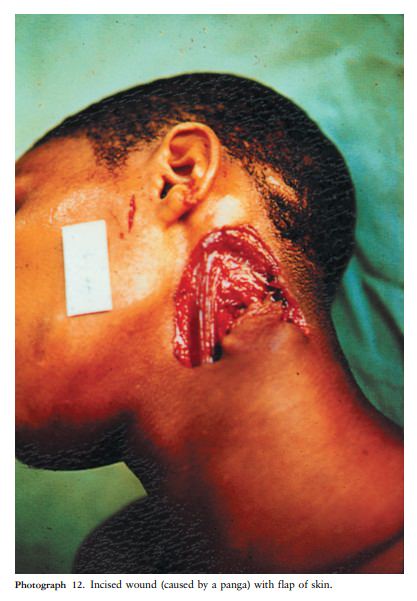 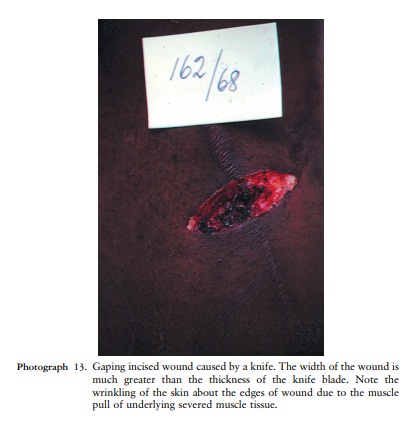 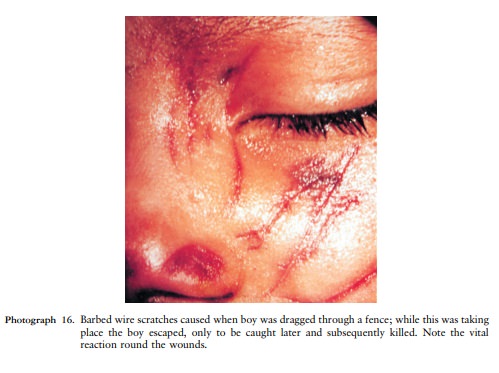 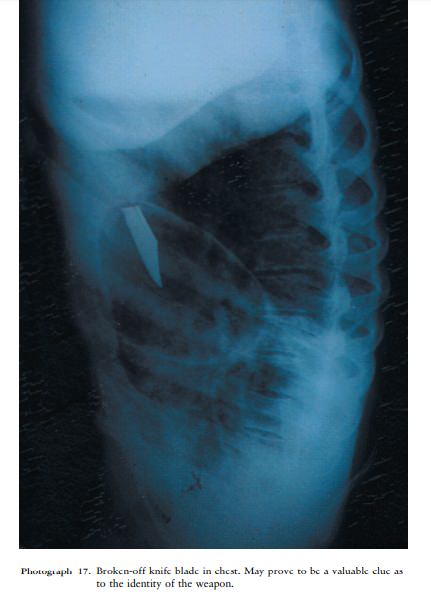