Classification of Lipids or Fats

Triglycerides, phospholipids, and sterols are all lipids found in food and the human body.

Triglycerides, phospholipids, and sterols are all lipids found in food and the hu-man body. Most lipids in the body (95%) are triglycerides. They are in body cells, and they circulate in the blood.

Triglycerides are composed of three (tri) fatty acids attached to aframework of glycerol, thus their name (Figure 5-1). Glycerol is derived from a water-soluble carbohydrate. Fatty acids are organic compounds of carbon atoms to which hydrogen atoms are attached. They are classified in two ways: essential or nonessential. Essential fatty acids (EFAs) are necessary fats that humans cannot synthesize; EFAs must be obtained through diet. EFAs are long-chain polyunsaturated fatty acids derived from linoleic, linolenic, and oleic acids. There are two families of EFAs: omega-3 and omega-6. Nec-essary, but nonessential, are the omega-9 fatty acids because the body can manufacture a modest amount, provided EFAs are present. 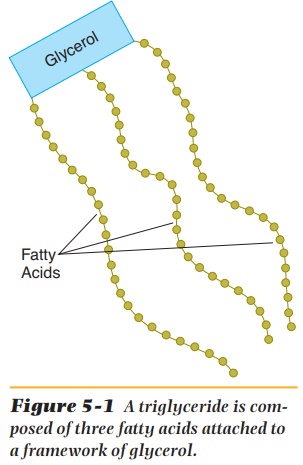 The other method of classification of fatty acids is by their degree of satu-ration with hydrogen atoms. In this method, they are described as saturated,monounsaturated, or polyunsaturated, depending on their hydrogen content(Figure 5-2). 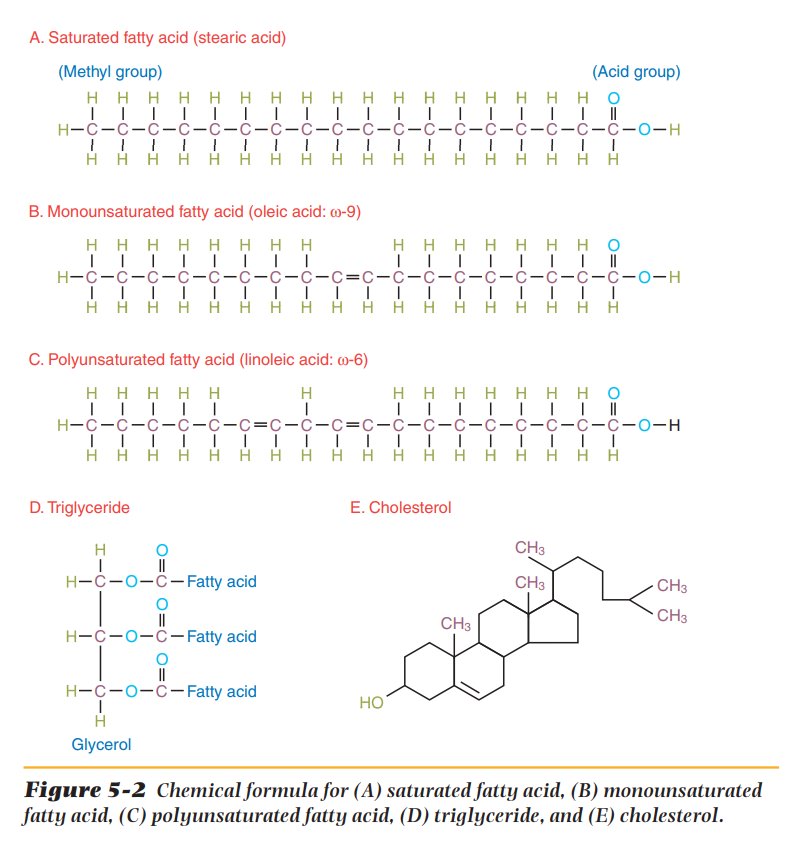 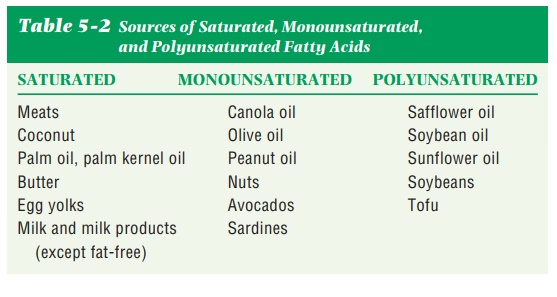 If a fat is polyunsaturated, there are two or more places among the carbon atoms of its fatty acids where there are fewer hydrogen atoms attached than in saturated fats. The point at which carbon-carbon double bonds occur in a poly-unsaturated fatty acid is the determining factor in how the body metabolizes it. The two major fatty acids denoted by the placement of their double bonds are the omega-3 and omega-6 fatty acids. Omega-3 fatty acids have been reported to help lower the risk of heart disease. Because omega-3 fatty acids are found in fish oils, an increased intake of fatty fish is recommended.

Trans-fatty acids (TFAs) are produced when hydrogen atoms are added tomonounsaturated or polyunsaturated fats to produce a semisolid product like margarine and shortening. A product is likely to contain a significant amount of TFAs if partially hydrogenated vegetable oil is listed in the first three ingredients on the label. The major source of TFAs in the diet is from baked goods and foods eaten in restaurants. TFAs raise LDLs and total cholesterol.