Hydro-plants are classified according to the head of water under which they work.

Hydro-plants are classified according to the head of water under which they work.

When the operating head of water exceeds 70 metres, the plant is known as “high head power plant”. Pelton turbine is used as prime mover in such power plants.

When the head of water ranges from 15 to 70 metres then the power plant is known as “medium head plant”. It uses Francis turbine.

When the head is less than 15 metres the plant is named as “low head plant”.It uses Francis or Kaplan turbine as prime mover.

This is a commonly used impulse type of turbine. It is named after an American engineer Lester. A. Pelton (1829-1908), who developed this turbine. The Pelton wheel is suitable for very high heads and it requires a lesser quantity of water.A pelton wheel is shown in figure.It consists of a runner, buckets, a nozzle, a guide mechanism, a hydraulic brake and casing. 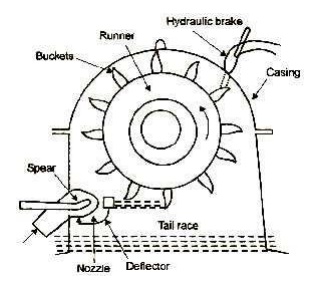 The runner is a circular disc. It consists of a number of semi-ellipsoidal buckets evenlyspaced around its periphery. The buckets are divided into two hemi-spherical cups by a sharp- edged ridge known as a splitter. This arrangement avoids the axial thrust and end thrust on bearings.(The axial thrusts being equal and opposite, neutralize each other).Generally, the buckets are bolted to the periphery of the runner. In some cases, to the periphery of the runner. In some cases, the buckets and the wheel are cast integral as one piece. In the case of the bolted type, broken or damaged buckets can be replaced conomically. For low heads, the bucket is made of case iron and for high heads, they are made of bronze or stainless steel to withstand heavy impact. 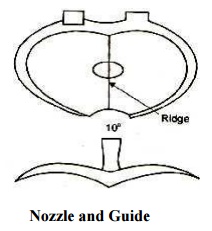 A nozzle is fitted to the end of the penstock near the turbine. The nozzle is provided with a conical needle or spears to regulate the quantity of water coming out of the nozzle, thereby control the speed of the runner. The spear may be operated manually by a hand wheel (for small units) or automatically by a governing mechanism (for larger units).

When the turbine has to be brought to rest by closing the inlet valve of the turbine, the runner generally takes a very long time to come to rest due to its inertia.To bring it to rest quickly, a small brake nozzle is provided. This nozzle is opened and it directs a jet of water at the back of the buckets. This acts as a brake to bring revolving runner quickly to rest.

The water is conveyed to the power house from the head race through penstocks.The nozzle is fitted to the end of the penstock (power house end) delivers a high velocity water jet into the bucket. One or more jets of water are arranged to impinge on the buckets tangentially. The impact of water jet on the bucket causes the wheel to rotate, thus producing mechanical work. An electric generator is coupled to the runner shaft and mechanical energy is converted into electrical power. 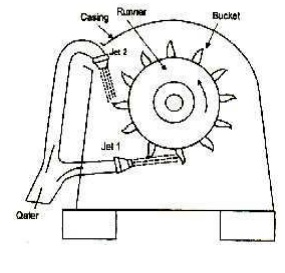 The maximum number of jets with a single runner is six.

Sometimes, for increasing the power, a number of runners mounted on a common shaft may be used. In certain cases, a combination of the above two systems may be preferred.

Reaction turbines operate under pressure of water. Only a part of the total head of water is converted into a kinetic head before it reaches the runner. The water completely fills all the passages in the runner (turbine runs full). Water enters the wheel due to the head of water at inlet and flows through the vanes. When flowing through the vanes, both the pressure and velocity change. The water leaves the turbine to the tail race at a reduced pressure and velocity. 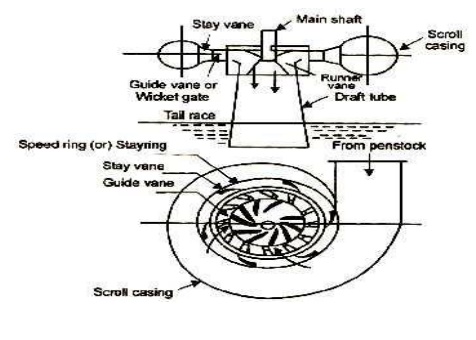