They are classified into natural dyes and synthetic dyes.

Dyes are organic compounds with two components namely Chromophore, which imparts colour and Auxochrome that help in substantivity of dyes. They are classified into natural dyes and synthetic dyes.

Natural dyes are colour substances obtained from natural sources. Natural dyes are used for all types of textile dyeing and printing until the middle of nineteenth century. The use of natural dyes were reduced due to the advent of synthetic dyes, though they were economical and posses excellent fastness properties. However, the growing consumer awareness on the harmful impact of synthetic dyes, concern for environment worldwide and stringent environmental laws lead to the revival of natural dyes.

·               They can be obtained from the natural sources which are abundant in a particular area. Hence supply of raw materials will be continuous and transport charges will be lower

Natural dyes are classified in to three types based on the source of origin namely vegetable dyes, animal dyes and mineral dyes.

The earliest dyes were of vegetable origin, discovered by accidentally staining garments with juices of fruits or plants. Vegetable dyes are obtained from different parts of plants such as leaves, flowers, fruits, pods, bark etc. These vegetable dyes can be applied directly or with different mordants.

Indigo: Indigo (blue dye) is called as the king of all natural dyestuffs. It imparts blue colour. It is extracted from the leaves of the leguminous plant, Indigofera tinctoria. It is suitable for dyeing cotton and wool.

Indian Madder: It produces shades of red on textile fabrics. It is used for dyeing cotton and woollen fabrics. It is extracted from roots of Rubia tinctoria.

Turmeric: It produces shades of yellow on fabrics. It is suitable for dyeing cotton, silk and wool. The yellow dye is extracted from the ground root (rhizome) of turmeric plant (Curcuma longa).

Marigold: It is extracted from lemon or orange coloured marigold (Calendula officinalis) flower. It is suitable for dyeing both silk and wool fibres.

Henna: The dye is extracted from the dried leaves of Henna plant, Lawsonia inermis. It produces yellowish orange colour. It is suitable for dyeing wool and silk fibres.

Onion: The dye is extracted from the outer most skin or peel of the onion (Allium cepa). The onion skins if properly dried can be used for one year. 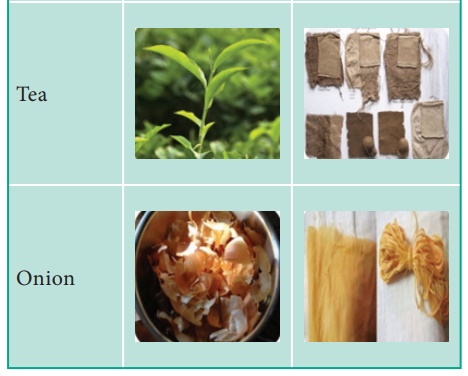 Dyes extracted from certain insects and invertebrates are called as animal dyes. Various shades of red and purple were obtained from animal origin. Cochineal, Tyrian purple and Lac are the commonly used animal dyes.

Cochineal dye is extracted from the dried bodies of the female red bug (Dactylopius coccus). It produces crimson and scarlet colours with mordants aluminium and tin oxide. This dyestuff was mostly used for dyeing wool and silk. These dyes exhibit excellent fastness properties.

This dye is extracted from the sea snails found in Mediterranean Sea. The amount of dye produced was very limited and therefore very expensive. Hence, it is called Royal purple.

This dye is extracted from the fluid secreted by the lac insect (Lauifer lacca), which lives on the twigs of the banyan trees and other varieties.

It produces crimson and scarlet colours. These dyes possess good fastness to light and washing. 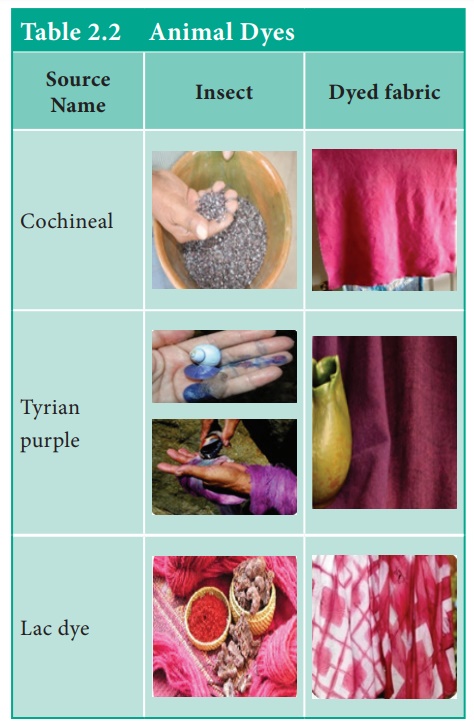 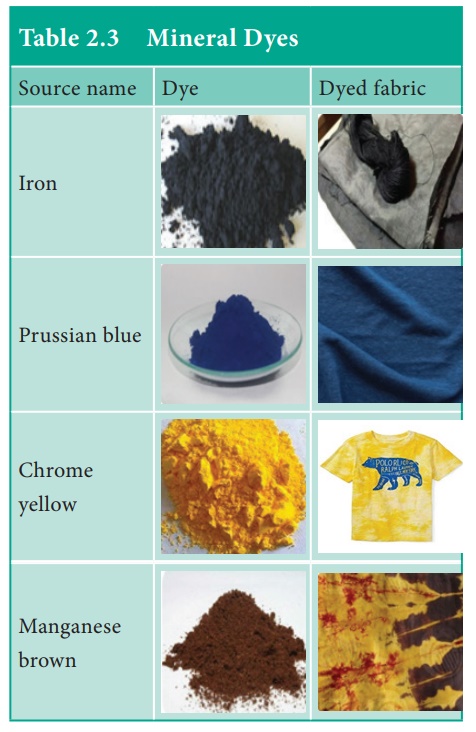 Dyes that are produced chemically are called as synthetic dyes. These are classified based on the chemical composition of the dye.

When a dye colours the fabric directly without the help of any fixing agent, the dye is said to be a direct dye. Direct dyes are water soluble. They are easy to produce, simple to apply and cheap in cost of production and application. Direct dyes are anionic in nature and have greater affinity for cellulosic fibres. They are used to dye cellulose fibres without a mordant in bright shades and they produce a wide range of colours. A levelling agent such as sodium carbonate is added for even dyeing. At the end of dyeing, exhaustion agent such as salt (NaCl) is added which helps the dye to leave the liquor and get attached to the fibre. Some direct dyes are used to dye wool, silk and nylon. Direct dyes can be applied to wide variety of textile materials such as apparel, upholstery fabrics, draperies, linings and automotive fabrics. Most direct dyes have good fastness to light but poor wash fastness.

Dyes that react with the fibres and form covalent bonds are called as reactive dyes. They become an integral part of the fibre. They are water soluble and are used to dye cellulose, protein and polyamide fibres. They produce full range of bright shade across the spectrum. They exhibit excellent wash fastness and good light fastness properties. Dyeing of fibre with reactive dyes involves 3 steps, namely exhaustion of dye (NaCl or Glauber’s salt), fixation of dye (sodium carbonate or sodium hydroxide) and washing off.

Basic dyes have cationic or basic groups (positively charged) and hence they are also known as cationic dyes. Basic dyes react with the acidic groups present in the fibres and form electrovalent bonds. Basic dyes are soluble in alcohol but not easily soluble in water. Basic dyes exhibit brilliant shades of colour which is not shown by other dye classes. Basic dyes are suitable for dyeing wool, silk and acrylic, but they have no affinity towards cellulosic fabrics. Basic dyes are used along with a mordant for fibres such as cotton, linen, acetate, nylon and polyester. Basic dyes show moderate light and wash fastness. For dye preparation, the dyestuff is mixed with equal amount of acetic acid followed by warm water under constant stirring.

Water soluble dyes that require acid (sulphuric, acetic, formic acid etc.,) in dye bath to dye silk or wool are called as acid dyes. These acid dyes are mostly sodium salts of organic acids. When dissolved in water, acid dyes produce negative ions (anions or acidic groups) which react with positive ions of protein fibres and get attached to the fibre through electrovalent bonds. Acid dyes are similar to direct dyes however they cannot be applied to cellulosic fibre due to slight variations in structure. Acid dyes have greater affinity for protein and polyamide fibres. They posses very good fastness to washing and good fastness to light. A large colour range is available with acid dyes. They are inexpensive.

Natural dyes and some synthetic dyes do not have affinity towards fibres. With the help of some chemicals, they can be used to dye fibres. These chemicals are called mordants or mordant dyes. Mordant dyes have affinity for both fibre and dye and form a linkage between the dye molecule and the fibre.

Disperse dyes are insoluble in water. Their solubility is increased by increasing temperature and by adding dispersing agents. They are suitable for dyeing hydrophobic fibres like nylon, polyester, acrylic and other synthetic fibres. Disperse dyes are non -ionic or neutral in nature. They have an excellent fastness to washing and sunlight exposure.

These dyes were initially fermented in a large wooden vessel known as vats and hence the name “vat dyes”. They are insoluble in water but soluble in alkali. Vat dyes are accepted into the fibre in a reduced or vatted form. When it is re-oxidized, it is then fixed to the fibre firmly. The dyes are treated with a reducing agent that converts them into leuco compounds, which is soluble in alkalis. The process of making the dyes soluble is known as Vatting. The leuco compounds are either colourless or exhibit a colour that is different from the colour of final product, which is achieved after oxidation. Once the dye is attached to the fibre, it gets oxidised and changed into an insoluble colour product that gets trapped inside the fibre. Indigo, an example of vat dyes has been used in India for long periods.

In the soluble form, vat dyes have excellent affinity for cellulosic fibres. Vat dyes are the fastest dyes for cotton, linen and rayon. They may be also applied to wool, nylon, polyester and acrylics with the use of a mordant. Vat dyes are resistant to light, acids and alkalies.

The basic principles of vat dye application can be summarized as follows:

Presence of sulphur is the characteristic feature of sulphur dyes. Like vat dyes, sulphur dyes are water insoluble and made soluble by the addition of reducing agents and alkali as solubiliser. They are converted into soluble leuco compounds by using sodium sulphide or sodium hydrosulphite as reducing agent. The leuco compounds have high affinity for cellulosic fibres. After dyeing the fabric, the dye is converted into insoluble form by the addition of potassium dichromate and acetic acid. Sulphur dyes do not produce brighter shades. They are cheap and produce colours like navy blue, black, khaki and olive green. They are used for black more than any other colours. They have excellent wash fastness property. The fabric loses its softness after dyeing with sulphur dyes.

Unlike other colouring matters, the azoic dyes are not prepared as dye stuffs but have to be produced directly in the fibre by the combination of their constituents. The first component, napthol in presence of sodium hydroxide give colourless or faintly yellow or brown colour when applied on cotton at room temperature. The naptholated fabric when immersed in the second bath containing the second component base along with the acid and sodium nitrite at ice cold temperature produces bright colour which is insoluble in water. The two components form azo group during coupling. So the dye is known as azoic dye. Since it is formed inside the fibre, it is called ingrain dye. Azo dyes are also called as ice colours since their application involves use of ice to lower the temperature. They are widely used on cellulosic fibres and have limited application on acrylic, nylon and polyester. Azo dyes exhibit bright colours. They have good colour fastness to washing and light.

Pigments are not true dyes because they have no affinity for the fibre. They are applied and held to the fabric with the help of adhesives and resins. Pigments are commonly used in dope dyeing and printing. Use of pigments saves both time and cost. Vat dye is called as dye when applied on fabric in solubilized form and is termed as pigment when applied on fabric in insoluble form using a binder. Pigment dyes exhibit excellent light fastness.

These dyes are also called as colourless dyes or fluorescent whiteners. These dyes absorb light at UV-region and emit blue light in visible region. It may be applied during bleaching or with the final finish. These dyes have affinity for cotton but are also used for wool, nylon, acetate and acrylics.