Such circumventricular organs include: ! The vascular organ of the terminal lamina ! The subfornical organ ! The area postrema ! The paraphysis ! The subcommissural organ

In lower vertebrates, the ependyma has secretory functions and probably also re-ceptor functions. This has resulted in the development of special structures that can be demonstrated also in mammals. Such circumventricular organs include:

!   The vascular organ of the terminal lamina

These organs are regressed in humans, and some of them (paraphysis and subcommis-sural organ) appear only temporarily during embryonic development. Their functions are unknown. It is assumed that they play a role in the regulation of CSF pressure and composition and that they are somehow re-lated to the neuroendocrine system of the hypothalamus. What is striking is their loca-tion at narrow passages of the ventricular system, their high vascularization, and thepresence of fluid-filled spaces.

Vascular Organ of the Terminal Lamina (A, D)

This organ (A, D1) lies in the terminal lamina which spans as rostral end of the third ventricle between the anterior com-missure and the optic chiasm. We distin-guish between a highly vascularized outerzone beneath the pia mater and an inner zone consisting mainly of glia. The vesselsform a dense plexus with sinuslike dilata-tions. In the inner zone run nerve fibers from the supraoptic nucleus that contain Gomori-positive material (Herring bodies, p. 204, B5). It also receives peptidergic fibers from the hypothalamus. 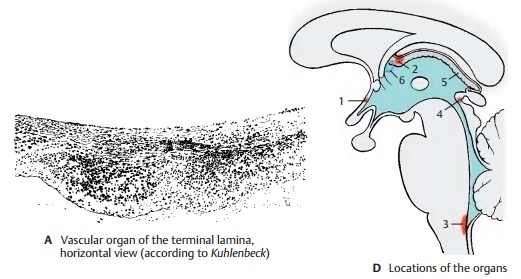 The subfornical organ (B, D2) lies as a small, pinhead-sized nodule between the two in-terventricular foramina in the roof of the third ventricle at the rostral end of the tela choroidea. In addition to glial cells and iso-lated neurons, it contains large round parenchymal cells, the neuronal character of which is disputedElectron microscopy has demonstrated ependymal canaliculi penetrating from thesurface and interconnecting with wide in-tercellular clefts. Vascular loops penetrate from the tela choroidea into the inside of the subfornical organ. Peptidergic nerve fibers (somatostatin, luliberin) terminate at capil-laries and in the area of the ependymal canaliculi. 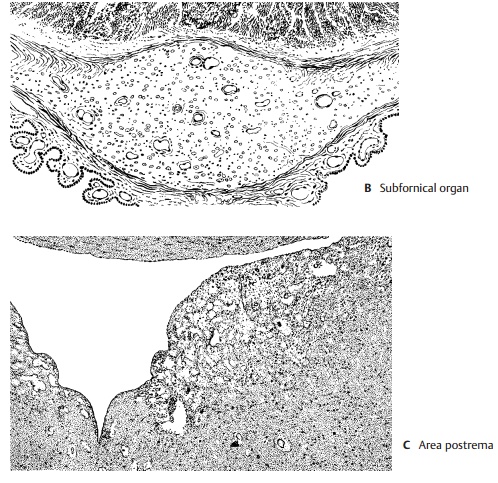 The area postrema (C, D3) consists of two symmetrical narrow structures at the floor of the rhomboid fossa; they lie at the fun-nel-shaped entrance of the central canal. The loose tissue of this region contains numerous small cavities. It consists of glia and parenchymal cells, which are generally regarded as neuronal cells. The tissue con-tains numerous convoluted capillaries that appear highly fenestrated in the electron-microscopic image. The area postrema is therefore one of the few brain regions where the blood–brain barrier is permeable.

Both structures appear in humans only tem-porarily during embryonic development (transitory structures). The paraphysis is a small saclike evagination of the roof of the third ventricle caudally to the interventricu-lar foramina. The subcommissural organ (D4) consists of a complex of cylindrical ependy-mal cells underneath the epithalamic com-missure. These cells produce a secretion that does not dissolve in the CSF but con-denses to form a long, thin filament, Reissner’s fiber. In animals in which the cen-tral canal is not obliterated, Reissner’s fiber extends into the lower spinal cord.