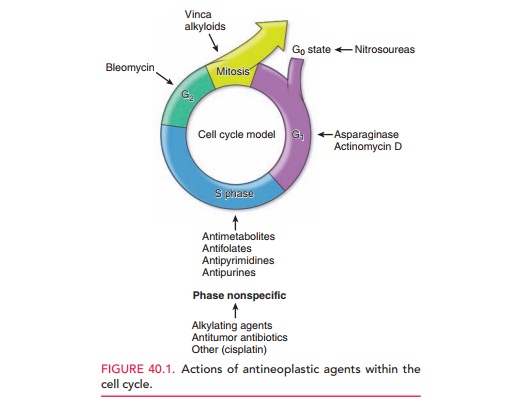 Several classes of antineoplastic drugs are available (Table 40.1). Alkylating agents and alkylating-like agents bind and cross-link DNA, interfering with DNA replica-tion and, ultimately, with RNA transcription. Dividing cells, especially those in the late G1 and S phases, are most sensitive to the effects of these drugs; however, these drugs are considered phase-nonspecific (i.e., they are effective in all phases of the cell cycle). The major side effect of the alkylating agents is myelosuppression. The alkylating-like agents behave similarly, and include the platinum-based agents cisplatin and carboplatin. 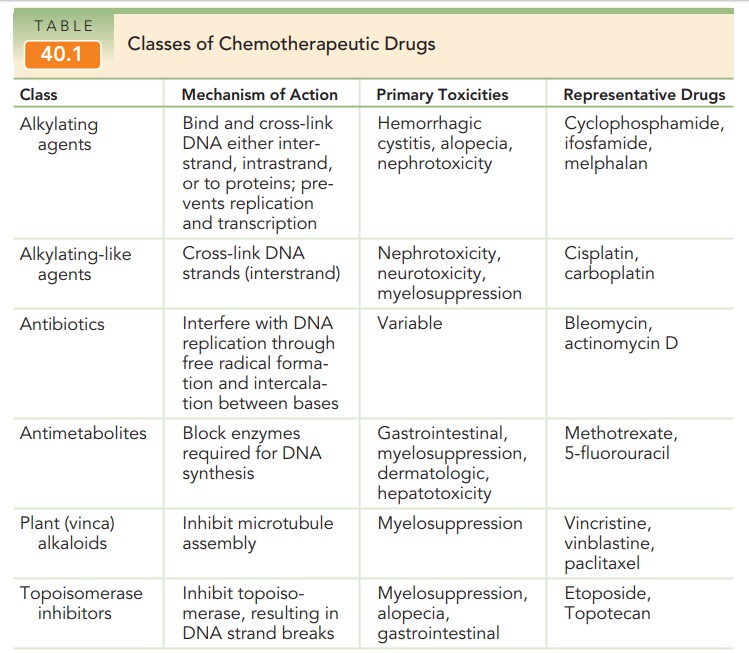 Antitumor antibiotics inhibit DNA-directed RNAsynthesis and also are involved in the formation of free rad-icals, causing strand breakage. They are phase-nonspecific. Their general side effects are similar to those of the alky-lating agents; however, each individual drug has its own individual toxicity. 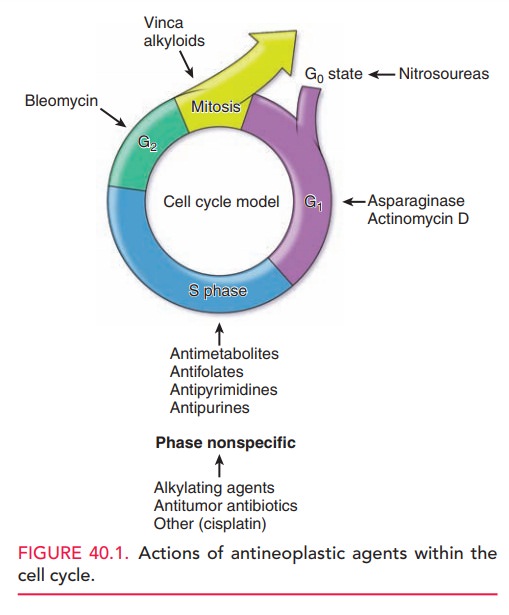 Antimetabolites are structural analogs of normalmolecules necessary for cell function. They competi-tively interfere with the enzymes involved with normal synthesis of nucleic acids and, therefore, are most active during the S phase of cell division. They may cause bone marrow suppression or gastrointestinal mucositis when given in a bolus.

Plant (vinca) alkaloids interfere with the M phaseof cell division by preventing the assembly of micro-tubules. They may cause bone marrow suppression or an anaphylactoid reaction.

Topoisomerase inhibitors result in cell death byinhibiting topoisomerase I (TOPO-I), an enzyme required for DNA replication. In a normally replicating cell, TOPO-I induces reversible single-strand breaks in the DNA. TOPO-I inhibitors complex with the DNA and TOPO-I and prevent repair of the breaks in the single strand of DNA, thus resulting in cellular death.

Endocrine therapy with selective estrogen receptormodulators (SERMs) acts in estrogen-sensitive breasttumors to block the interaction of estrogen with estrogen receptors (ERs). The therapeutic importance of cellular ERs has been well established in breast cancers. ER-positive tumors are responsive to endocrine therapy. Normally, estrogen enters cells and binds to ERs in the cytoplasm. The complex is translocated to the nucleus, where it binds to acceptor sites on chromosomes, resulting in activation of RNA and protein synthesis. SERMs act as competitive inhibitors of estrogen binding; the SERM–ER complex binds to chromosomes, but does not activate cell metab-olism. The subsequent decrease in cellular activity and cell division results in reduced tumor growth. The two SERMs most frequently prescribed in the United States are tamoxifen and raloxifene. Although relatively nontoxic, this class of drugs is related to an increased risk of endometrial cancer and uterine sarcomas and an increase in benign endometrial pathology.

Aromatase inhibitors (AIs), which suppress intra-tumor and plasma estrogen levels, are being used in post-menopausal patients for treatment of advanced breast cancer that has progressed beyond tamoxifen therapy.

Antineoplastic drugs are toxic because they act on normal as well as cancer cells. Table 40.2 describes the major applica-tions and side effects of antineoplastic agents. Rapidly dividing cell types of the erythroid, myeloid, and megakary-ocytic lineages are most sensitive to damage by common neoplastic drugs. Anemia, granulocytopenia (neutropenia), and thrombocytopenia are predictable side effects. Patients with anemia will often experience incapacitating lethargy. Patients with neutropenia are at high risk for fatal sepsis, and those with sustained thrombocytopenia are at risk for spontaneous gastrointestinal or acute intracranial hemor-rhage. Prophylactic antibiotics are administered to patients with febrile neutropenia or in neutropenic patients to pre-vent serious infection. Platelet transfusions can be used to decrease the risk of hemorrhage. 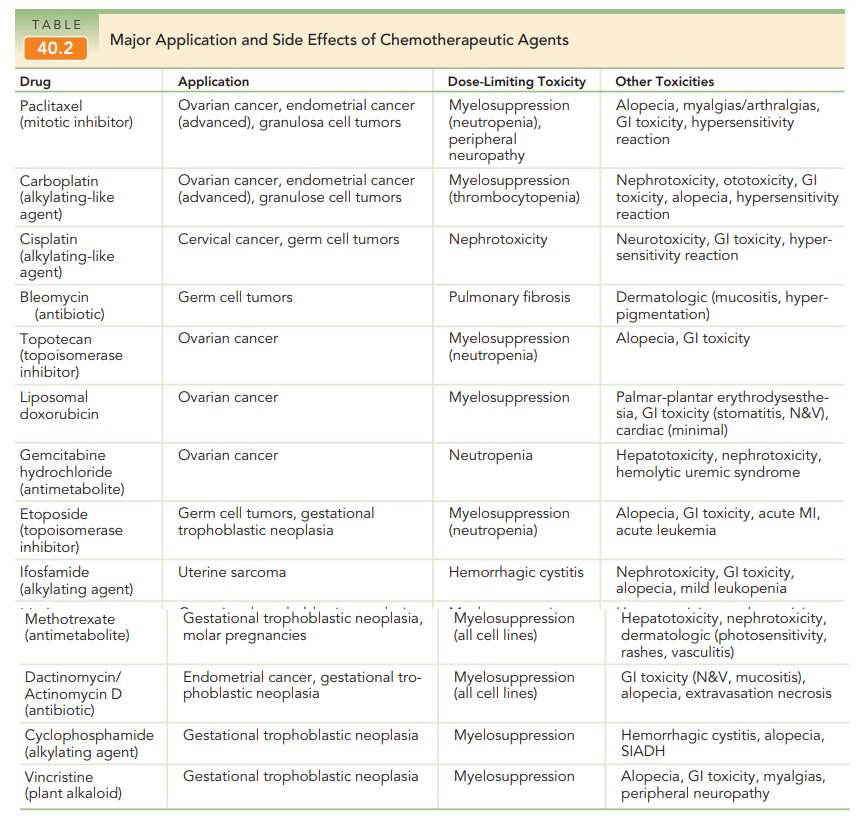 The use of single agents is limited by development of drug resistance and toxicity. Combination chemotherapy is used to counteract these limitations. Several strategies can be used to select drugs for combination chemotherapy. In sequential blockade, the drugs block sequential enzymesin a single biochemical pathway. In concurrent blockade, the drugs attack parallel biochemical pathways leading to the same end product. Complementary inhibition inter-feres with different steps in the synthesis of DNA, RNA, or protein.