Like all helminths, tapeworms lack vascular and respiratory systems.

Cestodes are long, ribbon-like helminths that have gained the common appellation oftapeworm from their superficial resemblance to sewing tape. Their appearance, number, and exaggerated reputation for inducing weight loss have made them the best known of the intestinal worms. Although improvements in sanitation have dramatically reduced their prevalence in the United States, they continue to inhabit the bowels of many of its citizens. In some parts of the world, indigenous populations take purgatives monthly to rid themselves of this, the largest and most repulsive of the intestinal parasites.

Like all helminths, tapeworms lack vascular and respiratory systems. In addition, they are devoid of both gut and body cavity. Food is absorbed across a complex cuticle, and the in-ternal organs are embedded in a solid parenchyma. The adult is divided into three distinct parts: the “head” or scolex; a generative neck; and a long, segmented body, the strobila. The scolex typically measures less than 2 mm in diameter and is equipped with four mus-cular sucking discs used to attach the worm to the intestinal mucosa of its host. (In one genus, Diphyllobothrium, the discs are replaced by two grooves, or bothria.) As a further aid in attachment, the scolex of some species possesses a retractable protuberance, or ros-tellum, armed with a crown of chitinous hooks. Immediately posterior to the scolex is the neck from which individual segments, or proglottids, are generated one at a time to form the chain-like body. Each proglottid is a self-contained hermaphroditic reproductive unit joined to the remainder of the colony by a common cuticle, nerve trunks, and excretory canals. Its male and female gonads mature and effect fertilization as the segment is pushed farther and farther from the neck by the formation of new proglottids. When the segment reaches gravidity, it releases its eggs by rupturing, disintegrating, or passing them through its uterine pore. The eggs of the genus Taenia possess a solid shell and con-tain a fully developed, six-hooked (hexacanth) embryo. The eggs of Diphyllobothrium la-tum, in contrast, are immature at the time of deposition and possess a covered aperture, oroperculum, through which the embryo exits once fully developed.

With the exception of Hymenolepis nana, further development of all cestodes requires the passage of the larvae through one or more intermediate hosts. Eggs of the genusTaenia pass in the stool of their definitive host, reach the soil, and are ingested by the specific in-termediate.

They hatch within its gut, and the released embryos penetrate the intestinal mucosa, find their way through the lymphohematogenous system to the tissues, and en-cyst therein. From the germinal lining of this cyst, immature scolices or protoscolices are formed. A cyst with a single such structure is known as a cysticercus (or, in the case ofH.nana, a cysticercoid); a cyst with multiple protoscolices is known as a coenurus. In somespecies of tapeworm, daughter cysts, each containing many protoscolices, are formed within the mother or hydatid cyst. The cycle for all is completed when the definitive host ingests the cyst-ridden flesh of the intermediate host. After digestion of the surrounding meat in the stomach, the cyst is freed, and the protoscolex everts to become a scolex. Fol-lowing attachment to the mucosa, a new strobila is generated.

D. latum, whose eggs are immature on release, requires two intermediates to completeits larval development. The egg must reach fresh water before the operculum opens and a ciliated, free-swimming larva, or coracidium, is released. The coracidium is then ingested by the first intermediate host, a copepod, in which it is transformed into a larva (procer-coid). When the copepod is, in turn, ingested by a freshwater fish, the larva penetrates the musculature of the fish to form an elongated and infectious larva, the plerocercoid. Life cycles and characteristics of important intestinal and tissue tapeworms infecting humans are summarized in Table 57 – 1. 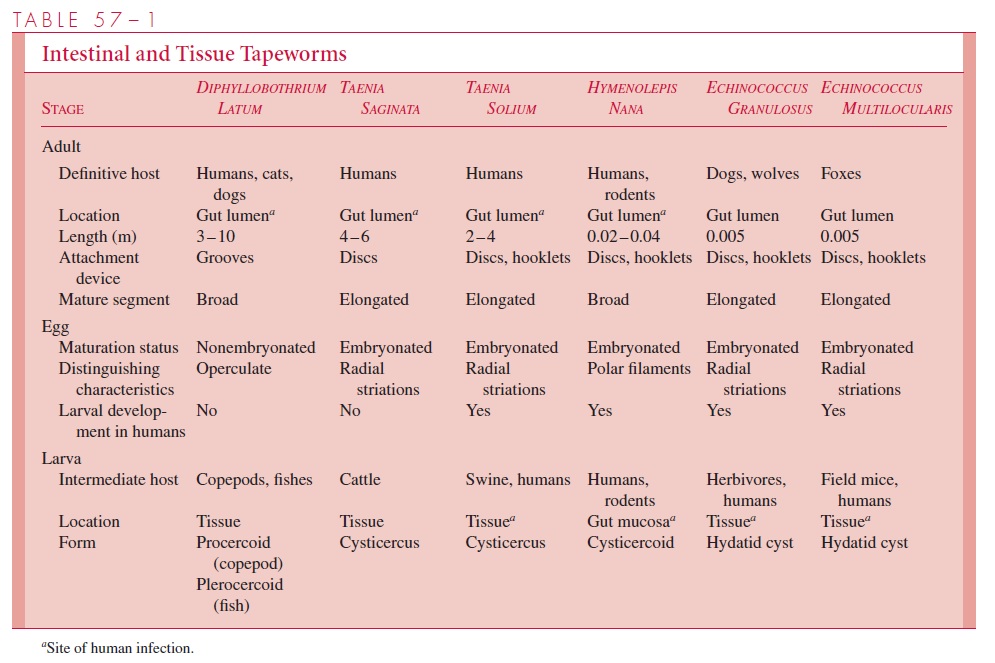