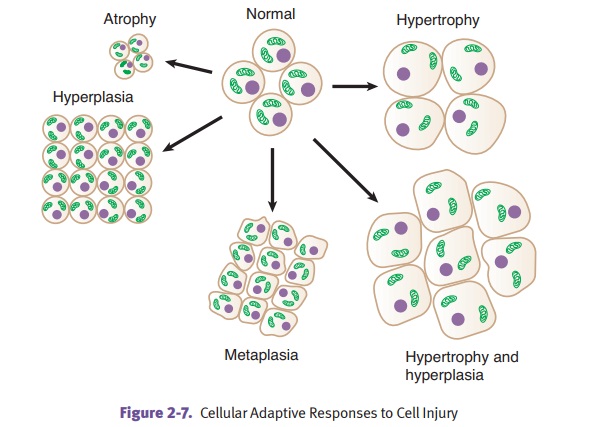 In general, cellular adaptation is a potentially reversible change in response to the environment.

In general, cellular adaptation is a potentially reversible change in response to the environment. 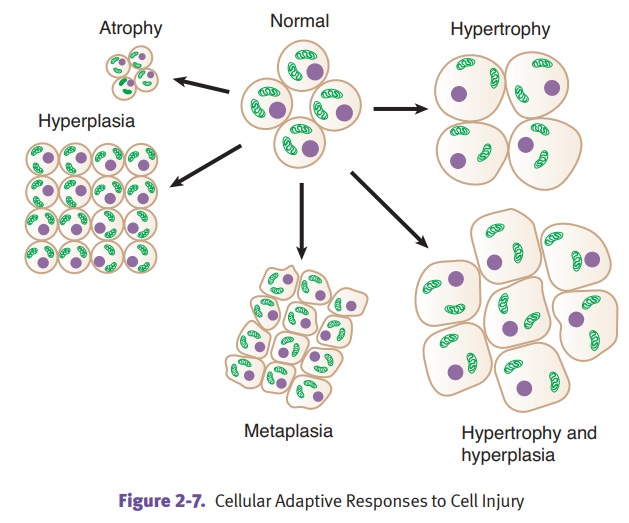 Hypertrophy is an increase in cell size and functional ability due to increased syn-thesis of intracellular components.

Causes of hypertrophy include:

Hypertrophy is mediated by growth factors, cytokines, and other trophic stimuli and leads to increased expression of genes and increased protein synthesis.

Hypertrophy and hyperplasia often occur together.

Hyperplasia is an increase in the number of cells in a tissue or organ. Some celltypes are unable to exhibit hyperplasia (e.g., nerve, cardiac, skeletal muscle cells).

Metaplasia is a reversible change of one fully differentiated cell type to another,usually in response to irritation. It has been suggested that the replacement cell is better able to tolerate the environmental stresses. For example, bronchial epithelium undergoes squamous metaplasia in response to the chronic irritation of tobacco smoke.

The proposed mechanism is that the reserve cells (or stem cells) of the irritated tissue differentiate into a more protective cell type due to the influence of growth factors, cytokines, and matrix components.