Morphologic types of necrosis (cell death in living tissue, often with an inflamma-tory response) are as follows:

Morphologic types of necrosis (cell death in living tissue, often with an inflamma-tory response) are as follows:

·            Coagulative necrosis, the most common form of necrosis, is most often due toischemic injury (infarct). It is caused by the denaturing of proteins within the cytoplasm. Microscopic examination shows loss of the nucleus but preservation of cellular shape. Coagulative necrosis is common in most organs, including the heart, liver, and kidney, but not the brain.

·  Fat necrosis is caused by the action of lipases on adipocytes and is characteris-tic of acute pancreatitis. On gross examination fat necrosis has a chalky white appearance.

·  Fibrinoid necrosis is a form of necrotic connective tissue that histologicallyresembles fibrin. On microscopic examination fibrinoid necrosis has an eosin-ophilic (pink) homogeneous appearance. It is often due to acute immunologic injury (e.g., hypersensitivity type reactions II and III) and vascular hyperten-sive damage. 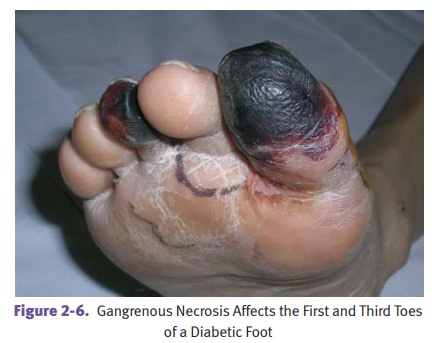 Apoptosis is a specialized form of programmed cell death without an inflammatoryresponse. It is an active process regulated by proteins that often affects only single cells or small groups of cells

·            In morphologic appearance, the cell shrinks in size and has dense eosino-philic cytoplasm. Next, nuclear chromatin condensation (pyknosis) is seen that is followed by fragmentation of the nucleus (karyorrhexis). Cytoplasmic membrane blebs form next, leading eventually to a breakdown of the cell into fragments (apoptotic bodies). Phagocytosis of apoptotic bodies is by adjacent cells or macrophages.

·            Stimuli for apoptosis include cell injury and DNA damage, lack of hor-mones, cytokines, or growth factors, and receptor-ligand signals such as Fas binding to the Fas ligand and tumor necrosis factor (TNF) binding to TNF receptor 1 (TNFR1).

·            Execution of apoptosis is mediated by a cascade of caspases (cysteine asparticacid proteases). The caspases digest nuclear and cytoskeletal proteins and also activate endonucleases.