Abortion is the expulsion of the product of conception, and specifically the foetus, from the uterus. According to the Births and Deaths Registration Act 51 of 1992 a foetus of less than 6 months, in other words 26 weeks, is not considered to be viable. Any foetus expelled before a gestational period of 26 weeks is thus by definition an abortion. It is, however, important to realise that with the help of modern medical technology such a foetus (or ratherbaby) could survive outside the mother. If this is the case, this baby is not regarded as an abortion, but as a living baby and must therefore be registered as such. This apparent contradiction is not unique to our legal system.

Abortions can be spontaneous or induced. Spontaneous abortions are a common phenomenon and are often called a miscarriage. The causes can be maternal, for instance diseases such as fever or infection, or an anatomically abnormal uterus. The foetus itself may also be abnormal due to genetic abnormalities. Some women tend to have multiple abortions, the so-called habitual abortions. These women therefore often have difficulties in giving birth to a viable baby as they fail to carry the growing foetus to a fully developed healthy baby at birth.

Induced abortions can be therapeutic or criminal. This is also known as termination of pregnancy. Before the Choice on Termination of Pregnancy Act 92 of 1996 came into effect on 1 February 1997, criminal or back-street abortions posed a real and dangerous risk for a pregnant female wishing to terminate a pregnancy. Approximately 75% of all deaths associated with abortions were the result of illegal conduct. The old Abortion and Sterilisation Act, which came into effect in 1975, did allow therapeutic termination of a pregnancy in certain limited circumstances. It was, however, not possible for a pregnant female to terminate the pregnancy by choice. 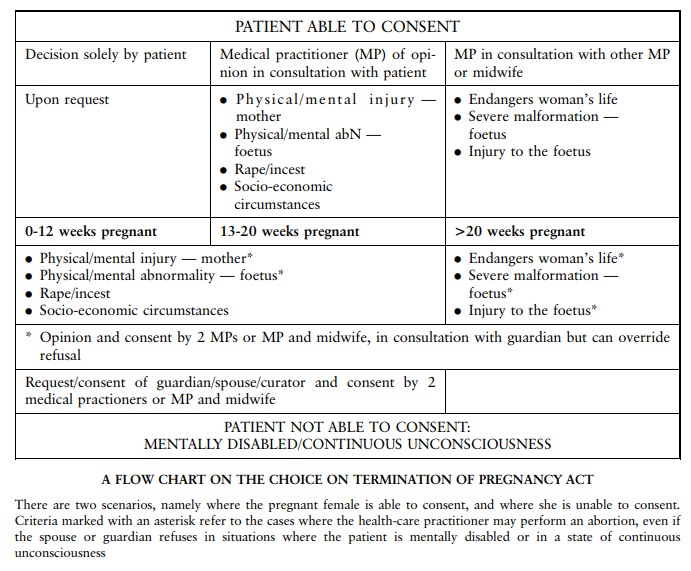 A therapeutic abortion is associated with relatively low risk for the mother. The sooner it is performed, the lower the risk. Criminal abortions, however, have a very high risk, and numerous cases of death of the mother used to occur. This was also one of the main reasons why the statutory grounds were broadened and the procedure simplified.

The most important complications of a criminal abortion are:

·              the toxic effect of the solutions used to induce the abortion, for instance soapy solutions

Although the incidence of death due to criminal abortions has decreased since 1997, criminal abortions are still a real problem. Any female of child-bearing age who dies suddenly and unexpectedly, must be regarded as pregnant, and therefore a possible victim of a failed abortion attempt, until proven otherwise.

Lung or pulmonary embolism because of a blood clot (embolus) is a risk during pregnancy and in the puerperium (the period following termination of pregnancy). Risk factors include operative intervention, for example caesarean section, or other trauma during delivery, high maternal age, obesity and any other reason causing the mother to be immobilised for a period of time.

Amniotic fluid embolism also occurs in full-term patients. It often occurs in older females who have precipitous labour (ie where birth is given rapidly).

After delivery blood loss due to injuries to the genital tract may also result in the demise of the patient if not aggressively managed. Infection is also a risk and puerperal sepsis could develop. As indicated above, criminal abortions are often complicated by infection or sepsis.

Pregnant women can also die due to conditions unique to pregnancy. With pre-eclampsia there is high blood pressure (hypertension), oedema and protein in the urine. If the patient develops convulsions or epileptic fits, it is known as eclampsia. These patients also have a risk of intracranial haemorrhages (bleeding inside the skull).

Abnormalities of the placenta

Two conditions which may threaten the life of the mother and the foetus are associated with the placenta.

Late in pregnancy the placenta can become detached from the uterine wall. Blood-clot abnormalities can develop, and death could follow. If the baby is not delivered immediately, both the mother and baby could die. This condition is known as abruptio placentae. In placenta praevia the placenta is in a low-lying position. With the onset of labour the cervix or the neck of the uterus dilates. The placenta can then become detached from the uterine wall, causing possible death of the mother and foetus.

Ectopic pregnancy is a condition where the foetus does not develop in the uterine cavity, but on the outside, often in one of the Fallopian tubes. When this thin-walled tube ruptures, it could cause haemorrhage into the abdominal cavity, which could be fatal.

Pregnancy affects the female body in a number of ways. It inter alia affects the haemodynamics (circulation and heart). This hyperdynamic circulation induced by the pregnancy in a female with pre-existing heart diseases (egvalvular abnormalities) may cause complications and even death.