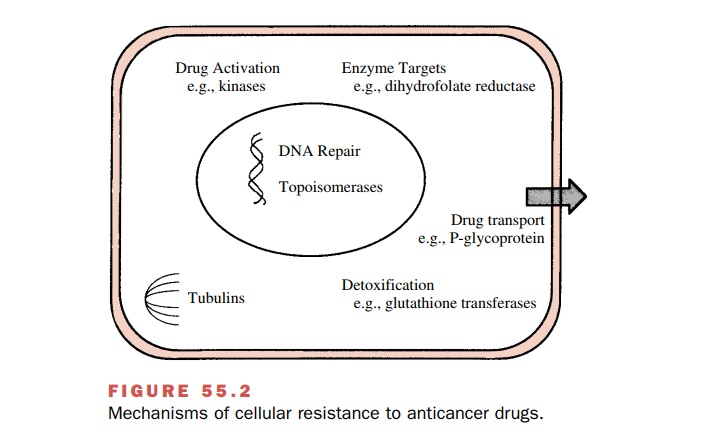 Cancers can be regarded as populations of cells un-dergoing spontaneous mutations. The population be-comes increasingly heterogeneous as the tumor grows and increasing numbers of mutations occur. Tumors of the same type and size will vary in their responsiveness to therapy because of the chance occurrences of drug-resistant mutations during tumor growth.

Assuming the same initial drug sensitivity, smaller tumors are generally more curable than larger tumors because of the increased probability of drug-resistant mutations in the larger tumors. Therefore, therapy ear-lier in the course of tumor growth should increase the chance for cure. Combination chemotherapy is often more effective than treatment with single drugs. Tumors that are resistant to drugs from the outset will always have a largely drug-resistant population and will be re-fractory to treatment.

Many kinds of biochemical resistance to anticancer drugs have been described. The biochemical and genetic mechanisms of resistance to methotrexate are now known in some detail. Three major resistance pathways have been described: (1) decreased drug transport into cells; (2) an alteration in the structure of the target en-zyme dihydrofolate reductase (DHFR), resulting in re-duced drug affinity; and (3) an increase in DHFR con-tent of tumor cells. The increase in DHFR content occurs through a process of gene amplification, that is, a reduplication or increase in the number of copies per cell of the gene coding for DHFR. Amplification of var-ious genes may be a relatively frequent event in tumor cell populations and an important genetic mechanism for generating resistance to drugs.

Tumor cells may become generally resistant to a va-riety of cytotoxic drugs on the basis of decreased uptake or retention of the drugs. This form of resistance is termed pleiotropic, or multidrug, resistance, and it is the major form of resistance to anthracyclines, vinca alka-loids, etoposide, paclitaxel, and dactinomycin. The gene that confers multidrug resistance (termed mdr I) en-codes a high-molecular-weight membrane protein called P-glycoprotein, which acts as a drug efflux pump in many tumors and normal tissues.

Possible biochemical mechanisms of resistance to alkylating agents include changes in cell DNA repair ca-pability, increases in cell thiol content (which in turn can serve as alternative and benign targets of alkylation), decreases in cell permeability, and increased activity of glutathione transferases. Increased metallothionein content has been associated with tumor cell resistance to cisplatin.

Drugs that require metabolic activation for antitu-mor activity, such as the antimetabolites 5-fluorouracil and 6-mercaptopurine, may be ineffective if a tumor is deficient in the required activating enzymes. Alter- natively, a drug may be metabolically inactivated by re-sistant tumors, which is the case with cytarabine (pyrim-idine nucleoside deaminase) and bleomycin (bleomycin hydrolase). Leukemias have been shown to develop re-sistance to L-asparaginase because of a drug-related in-duction of the enzyme asparagine synthetase.

Major mechanisms of cellular resistance to anti-cancer drugs are depicted in Fig. 55.2. 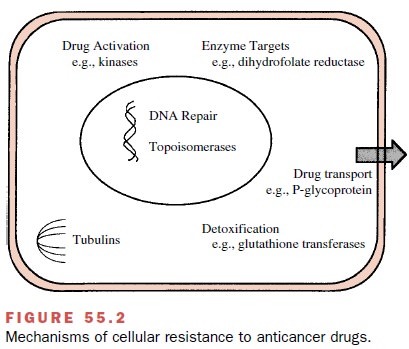