The hardware for a typical CAD system consists of the following components: (1) one or more design workstations, (2) digital computer, (3) plotters, printers. and other output devices.

The hardware for a typical CAD system consists of the following components: (1) one or more design workstations, (2) digital computer, (3) plotters, printers. and other output devices. and (4) storage devices. The relationship among the components i, illustrated in Figure 24.S.ln addition, the CAD system would have a communication interface to permit transmission of data to and from other computer systems. thus enabling some of the benefits of computer integration

Design Workstations. The workstation is the interface between computer and user in the CAD system. Its functions are the following: (1) communicate with the CPU. (2) continuously  generate  a graphic  image. (3)  provide  digital  descriptions  of the image, (5) translate user commands into operating functions, and (5) facilitate interaction between the user and the system.

The design of the CAD workstation and its available features have an important influence on the convenience, productivity. and quality of the user's output. The workstation must include a graphics display terminal and a set of user input devices. The display terminal must be capable of showing both graphic~ and alphanumeric text. It is the principal means by which the system communicates with the user. For optimum graphics display, the monitor should  have a large color screen  with high resolution. 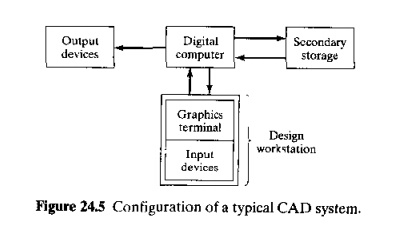 keyboard can also be used to enter commands and instructions to the system. However. other input devices accomplish this function more conveniently. Special function keypads have been developed to allow entry of a command in only one or two keystrokes. These special keypads have from 10 to 50 function keys, depending on the system. However, each key provides more than one function, depending on the combination of keys pressed or which software is being used. Another input device for entering commands to a CAD system is the electronic tablet, an electronically sensitive board on which an instruction set is displayed, arid commands arc entered using a puck or electronic pen.

Cursor control permits the operator to position the cursor on the screen to identify a location where some function is to be executed. For example, to draw a straight line on the screen, the endpoints of the line can be identified by locating the cursor in sequence at the two points and giving the command to construct the line. There are various cursor control devices used in CAD, inducting pucks, mouse’s, joysticks, trackballs, thumbwheels, light pens, and electronic tablets. An input device for entering coordinates from an existing drawing into the CAD system is a digit/t.er, which consists of a large flat board and an electronic tracking element such as a puck that can be moved across the surface of the board to record x and y-coordinate positions.

The host and terminal was the original CAD configuration in the Ig70s and early 1980s when the technology was first developing. For many years, it was the only configuration available. In this arrangement, a large mainframe computer or a minicomputer serves as the host for one or more graphics terminals. These systems were expensive, each installation typically representing an investment of a million dollars or more. The powerful microprocessors and high-density memory devices that are so common today were not available at that time. The only way to meet the computational requirements for graphics processing and related CAD applications was to use a mainframe connected 10 multiple terminals operating on a timesharing basis. Host and terminal CAD systems are still used today in the automotive industry and other industries in which it is deemed necessary to operate a large central database.

An engineering workstation is a standalone computer system that is dedicated to one user and capable of executing graphics software and other programs requiring high-speed computational power. The graphics display is a high-resolution monitor with a large screen. As shown in our figure, engineering workstations are often networked to permit exchange of data files and programs between users and to share plotters and data storage devices.

A PC-based CAD system is a PC with a high-performance CPU and medium to high resolution graphics display screen. The computer is equipped with a large random access memory (RAM), math coprocessor, and large capacity hard disk for storage of the large applications software packages used for CAD. PC-based CAD systems can be networked 10 share file" output devices, and for other purposes. Starting around 1996, CAD software developers began offering products that utilize the excellent graphics environment of Microsoft Windows NT, thus enhancing the popularity and familiarity of PC-based CAD. 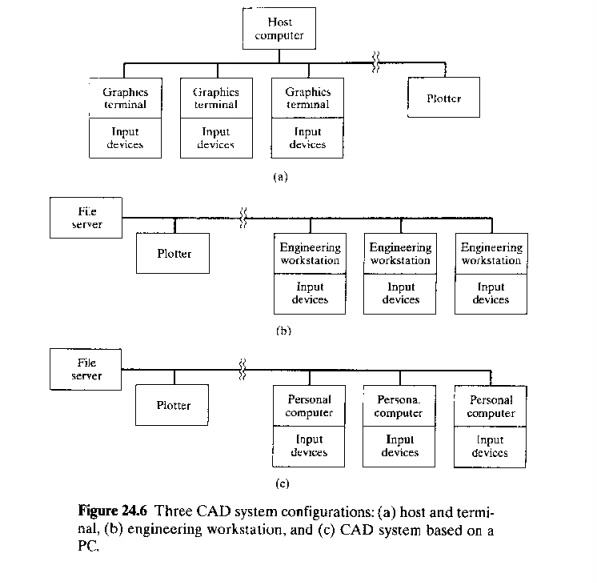 When the engineering workstation is compared with the PC-based system, the former is superior in terms of most performance criteria. Its capacity to efficiently accomplish 3D geometric modeling and execute other advanced software exceeds that of a PC, and this makes the workstation more responsive and interactive than a PC-based CAD System. However, the performance characteristics of PCS are improving each year, and the prices of engineering workstations are dropping each year, so that the distinction between the two types is becoming blurred.

Plotters and Printers, The CRT display is often the only output device physically located at the CAD workstation. There is a need to document the design on paper. The peripherals of the CAD system include one or more output devices for this purpose. Among these output devices are the following

Dot-matrix printers. In the operation of these printers, small hammers strike an ink ribbon against the paper to form a drawing consisting of many ink dots.

Inkjet printers. These arc similar to dot-matrix printers except that the dots arc formed by high-speed jets of ink impacting the paper.

Storage Devices. Storage peripherals are used in CAD systems to store programs and data files. The storage medium is usually a magnetic disk or magnetic tape, Files can be retrieved more quickly from magnetic disks, which facilitates loading and exchange of files between CPU and disk. Magnetic tape is less expensive, but more time is required to access a given file due to the sequential file storage on the tape. His suited to disk backup, archival files, and data transfer to output devices.