Product design is a critical function in the production system. The quality of the product design (i.e.. how well the design department does its job) is probably the single most important factor in determining the commercial success and societal value of a product.

Let us begin our discussion of product design by describing the general process of design. We then examine how computers are used to augment and automate the design process.

The general process of design is characterized by Shigley  as an iterative process consisting of six phases: (1) recognition of need, (2) problem definition, (3) synthesis, (4) analysis and optimization,(5) evaluation, and (6) presentation. These six steps, and the iterative nature of the sequence in which they are performed, are depicted in Figure 24.2(a).

Recognition of need (1) involves the realization by someone that a problem exists for which some corrective action can be taken in the form of a design solution. This recognition might mean identifying some deficiency in a current machine design by an engineer or perceiving of some new product opportunity by a salesperson. Problem definition (2) involves a thorough specification of the item to be designed. This specification includes the physical characteristics, function, cost, quality, and operating performance.

Synthesis (3) and analysis (4) are closely related and highly interactive in the design process. Consider the development of a certain product design: Each of the subsystems of the product must be conceptualized by the designer, analyzed, improved through this analysis procedure, redesigned, analyzed again, and so on. The process is repeated until the design has been optimized within the constraints imposed on the designer. The individual components are then synthesized and analyzed into the final product in a similar manner.

Evaluation (5) is concerned with measuring the design against the specifications established in the problem definition phase. This evaluation often requires the fabrication and testing of a prototype model to assess operating performance, quality, reliability, and other criteria. The final phase in the design procedure is the presentation of the design. Presentation (6) is concerned with documenting the design by means of drawings, material specifications, assembly lists, and so on. In essence, documentation means that the design data base is created.

Application  of Computers  in Design

Computer-aided design (CAD) is defined as any design activity that involves the effective use of the computer to create, modify, analyze, or document an engineering design. CAD is most commonly associated with the use of an interactive computer graphics system, re 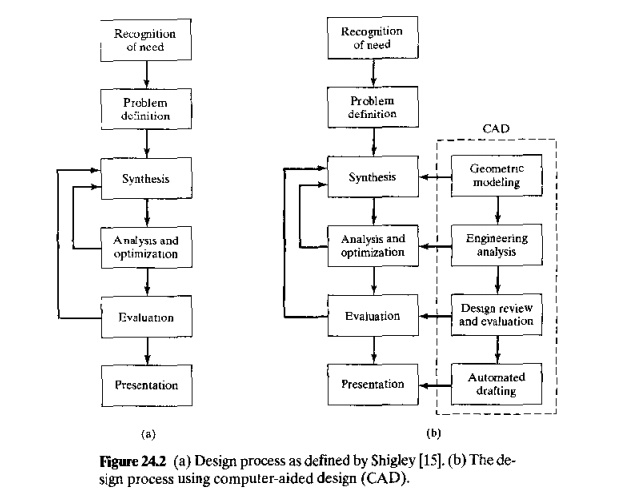 ferred 10 as a CAD system. The term CAD/CAM system is also used if it supports manufacturing as well as design applications.

There are several good reasons for using a CAD system to support the engineering design function [l1J:

To improve the quality of Ihe design, The use of a CAD system with appropriate hardware and software capabilities permits the designer to do a more complete engineering analysis and to consider a larger number and variety of design alternatives.

The quality  of the resulting  design  is thereby  improved.

To improve design documentation. The graphical output of a CAD system results in better documentation of the design than what is practical with manual drafting. The engineering drawings are superior, and there is more standardization among the drawings, fewer drafting errors, and greater legibility.

To create a manufacturing data base. In the process of creating the documentation for the product design (geometric specification of the product, dimensions of the components, materials specifications, bill of materials, etc.), much of the required data base to manufacture the product is also created.

With reference !O the six phases of design defined previously, a CAD system can beneficially be used in four of the design phases, as indicated in Table 24.1 and Illustrated in Figure 24.2(b) as an overlay on the design process of Shigley.

Geometric Modeling Geometric modeling involves the use of a CAD system to develop a mathematical description of the geometry of an object. The mathematical description, called a geometric model, is contained in computer memory. This pennits the user of the CAD system to display an image of the model on a graphics terminal and toper-form certain operations on the model. These operations include creating new geometric models from basic building blocks available in the system, moving the images around on the screen, zooming in on certain features of the image, and so forth. These capabilities permit the designer to construct a model of a new product (or Its components) or to modify an existing model.

There are venous types of geometric models used in CAD. One classification distinguishes between two dimensional (2D) and three dimensional (3D) models. Two dimensional  models are best utilized for design problems in two dimensions, such as flat objects and layouts of buildings. In the first CAD systems developed in the early 1970s, 2·0systems were used principally as automated drafting systems. They were often used for 3D objects, and it was left to the designer or draftsman to properly construct the various views of the object. Three dimensional CAD systems are capable of modeling an object in three dimensions. The operations and transformations on the model are done by the system in three dimensions according to user instructions. This is helpful in conceptualizing the object since the true 3D model can be displayed in various views and from different angles.

are available for removing these so-called hidden lines, but even with this improvement, wireframe representation is still often inadequate. Solid models are a more recent development in geometric modeling. In solid modeling, Figure 24.3(b),an object is modeled in solid three dimensions, providing the user with a vision of the object very much like it would be seen in real life. More important for engineering purposes, the geometric model is stored in the CAD system as a 3D solid model. thus providing a more accurate representation of the object. This is useful for calculating mass properties, in assembly to perform interference checking between mating components, and in other engineering calculations.

Finally, two other features in CAD system models are color and animation. Some CAD systems have color capability in addition to black-and-white. The value of color is largely to enhance {he ability of the user to visualize the object on the graphics screen. For example, the various components of an assembly can be displayed in different colors, thereby permitting the parts to be more readily distinguished. Animation capability permits the operation of mechanisms and other moving objects to be displayed on the graphics monitor.

Mass properties analysis, which involves the computation of such features of a solid object as its volume, surface area, weight, and center of gravity. It is especially applicable in mechanical design. Prior to CAD, determination of these properties often required painstaking and time consuming calculations by the designer. 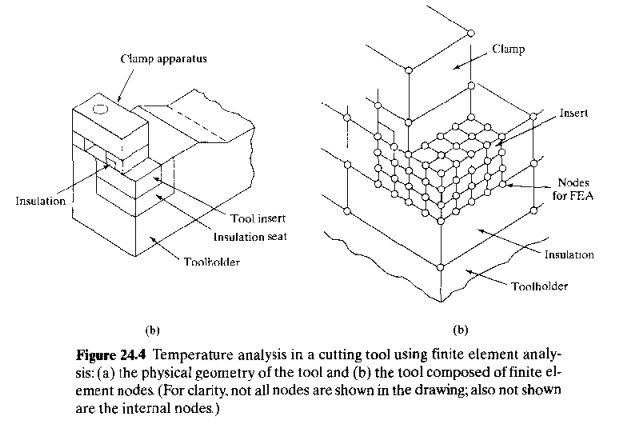 Figure 24.4 Temperature analysis in a cutting tool using finite element analysis: (a) the physical geometry of the tool and (b) the tool composed of finite element nodes. (For clarity. not all nodes are shown in the drawing; also not shown are the internal nodes)

cal equations, By solving the equations for each node. the distribution of values of the variable throughout the physical object is determined. Figure 24.4 illustrates a finite element model to analyze temperatures in a cutting tool.

Discrete-event simulation. This type of simulation is used to model complex operational systems, such as a manufacturing cell or a material handling system, as events occur at discrete moments in time and affect the status and performance of the system. For example, discrete events in the operation of a manufacturing cell include parts arriving for processing or a machine breakdown in the cell. Measures of the status and performance include whether a given machine in the cell is idle or busy and the overall production rate of the cell. Current discrete-event simulation software usually includes an animated graphics capability that enhances visualization of the system's operation.

Design Evaluation and Review. Design evaluation and review procedures can be augmented by CAD. Some of the CAD features that are helpful in evaluating: and reviewing a proposed design include:

Error checking. This term refers 10 CAD algorithms that are used to review the accuracy and consistency of dimensions and tolerances and to assess whether the proper design documentation format has been followed

Plant layout design scores. A number of software packages are available for facilities design. that is, designing the floor layout and physical arrangement of equipment in a facility. Some of these packages provide one or more numerical scores for each plant layout design, which allow the user to assess The merits of the alternative with respect to material flow, closeness ratings. and similar factors.

The traditional procedure in designing a new product includes fabrication of a prototype before approval and release of the product for production The prototype serves as the "acid test" of the design, permitting the designer and others to see. feel, operate, and test the product for any last-minute changes or enhancements of the design. The problem with building a prototype is that it is traditionally very time consuming; in some cases, months are required to make and assemble all of the parts. Motivated by the need to reduce this lead time for building the prototype. several new approaches have been developed that rely on the usc of the geometric model of the product residing in the CAD data file. We mention two of these approaches here: (1) rapid prototyping and (2) virtual prototyping,

Rapid prototyping is a general term applied to a family of fabrication technologies that allow engineering prototypes of solid parts to be made in minimum lead time [12J. The common feature of the rapid prototyping processes is that they fabricate the part directly from the CAD geometric model. This is usually done by dividing the solid object into a series of layers of small thickness and then defining the area shape of each layer. For example, a vertical cone would be divided into a series of circular layers, each circle becoming smaller and smaller as the vertex of the cone is approached. The rapid prototyping processes then fabricate the object by starting at the base and building each layer on top of the preceding layer to approximate the solid shape. The fidelity of the approximation depends on the thickness of each layer. As layer thickness decreases, accuracy increases. There are a variety of  layer-building processes used in rapid prototyping. The most common process, called stereollthography, uses a photosensitive liquid polymer that cures (solidifies) when Subjected to intense light. Curing of the polymer is accomplished using a moving laser beam whose path for each layer is controlled by means of the CAD model. By hardening each layer, one on top of the preceding, a solid polymer prototype of the part is built.

Virtual prototyping. based on virtual reality technology, involves the use of the CAD geometric model to construct a digital mockup of the product, enabling the designer and others to obtain the sensation of the real physical product without actually building the physical prototype. Virtual prototyping has been used in the automotive industry to evaluate new car style designs. The observer of the virtual prototype is able to assess the appearance of the new design even though no physical model is on display. Other applications of virtual prototyping include checking the feasibility of assembly operations, for example, parts mating, access and clearance of parts during assembly, and assembly sequence.

Automated Drafting. The fourth area where CAD is useful (step 6 in the design process) is presentation and documentation. CAD systems can be used as automated drafting machines to prepare highly accurate engineering drawings quickly. It is estimated that a CAD system increases productivity in the drafting function by about fivefold over manual preparation of drawings