The bimanual examination uses both a “vaginal” hand and an “abdominal” hand to entrap and palpate the pelvic organs.

The bimanual examination begins by exerting gentle pres-sure on the abdomen approximately halfway between the umbilicus and the pubic hair line with the abdominal hand, while inserting the index and middle fingers of the vaginal hand into the vagina to approximately 2 inches and gently pushing downward, distending the vaginal canal. The pa-tient is asked to feel the muscles being pushed on and to relax them as much as possible. Then both the index and middle fingers are inserted into the vagina until they rest at the limit of the vaginal vault in the posterior fornix behind and below the cervix. A great deal of space may be created by posterior distension of the perineum. Occasionally, only the index finger of the vaginal hand can be comfort-ably inserted.

During the bimanual examination, the pelvic struc-tures are “caught” and palpated between the abdominal and vaginal hands. Whether to use the dominant hand as the abdominal or vaginal hand is a question of personal preference. A common error in this part of the pelvic examina-tion is failure to make effective use of the abdominal hand. Pressure should be applied with the flat part of the fingers, not the fingertips, starting midway between the umbilicus and the hairline, moving downward in conjunction with upward movements of the vaginal hand. The bimanual ex-amination continues with the circumferential examination of the cervix for its size, shape, position, mobility, and the presence or absence of tenderness or mass lesions (Fig. 1.9). 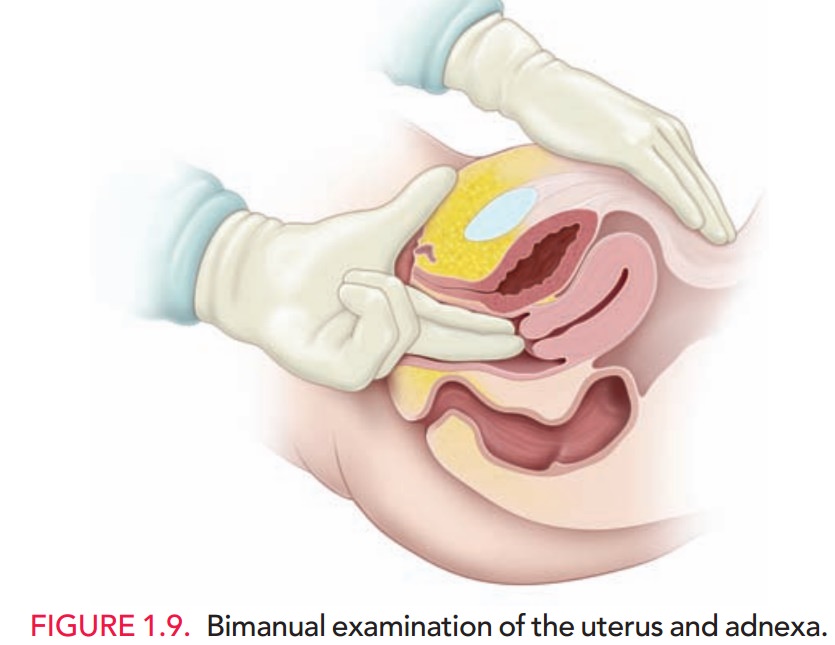 Bimanual examination of the uterus is accomplishedby lifting the uterus up toward the abdominal fingers so that it may be palpated between the vaginal and abdominal hands. The uterus is evaluated for its size, shape, consis-tency, configuration, and mobility; for masses or tenderness; and for position. The uterus may tilt on its long axis (from cervix to fundus, version) yielding three positions (ante-verted, midposition, and retroverted). It may also tilt ona shorter axis (from just above or at the area of the lower uterine segment, flexion) yielding two positions (ante-flexed and retroflexed) (see Fig. 4-12). The retroverted,retroflexed uterus has three particular clinical associations:

it is especially difficult to estimate gestational age by bi-manual examination, (2) it is associated with dyspareunia and dysmenorrhea, and (3) its position behind and below the sacral promontory may lead to the obstetric complica-tion of uterine inculcation. Cervical positionis often relatedto uterine position. A posterior cervix is often associated with an anteverted or midposition uterus, whereas an anterior cervix is often associated with a retroverted uterus. Sharp flexion of theuterus, however, may alter these relations.

Examination of the retroverted uterus may be more difficult. In some cases, the vaginal fingers may be slowly pushed below or at the level of the uterine fundus, after which gentle pressure exerted inward and upward causes the uterus to antevert, or at least to move “upward,” some-what facilitating palpation. Then palpation is accomplished as in the normally anteverted uterus. If this cannot be done, a waving motion with the vaginal fingers in the posterior fornix must be combined with an extensive rectovaginal examination to assess the retroverted uterus.

Bimanual examination of the adnexa to assess theovaries, fallopian tubes, and support structures begins by placing the vaginal fingers to the side of the cervix, deep in the lateral fornix. The abdominal hand is moved to the same side, just inside the flare of the sacral arch and above the pubic hairline. Pressure is then applied downward and toward the symphysis with the abdominal hand, at the same time lifting upward with the vaginal fingers. The same movements of the fingers of both hands used to as-sess the uterus are used to assess the adnexal structures, which are brought between the fingers by these maneu-vers to evaluate their size, shape, consistency, configuration, mobility, and tenderness, as well as to palpate for masses. Special care must be taken when examining the ovaries, which are sensitive even in the absence of pathology. The ovaries are palpable in normal menstrual women approximately half of the time, whereas palpation of ovaries in postmenopausal women is less common.