The benzodiazepines constitute the most commonly used group of anxiolytics and sedative–hypnotics. Since the first member of this group, chlordiazepoxide, was intro-duced, many congeners have been marketed.

The benzodiazepines constitute the most commonly used group of anxiolytics and sedative–hypnotics. Since the first member of this group, chlordiazepoxide, was intro-duced, many congeners have been marketed. Most of these drugs possess anxiolytic, sedative–hypnotic, and anticonvulsant properties. Thus, the clinical indications for specific benzodiazepines are not absolute. and their uses overlaps considerably.

The basic chemical structure of the benzodiazepines consists of a benzene ring coupled to a seven-member heterocyclic structure containing two nitrogens (di-azepine) at positions 1 and 4 (Fig. 30.1). Of the 2,000 benzodiazepines that have been synthesized, approxi-mately 15 clinically useful compounds are on the mar-ket in the United States (Table 30.1). 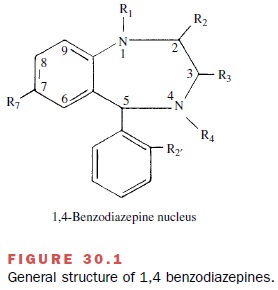 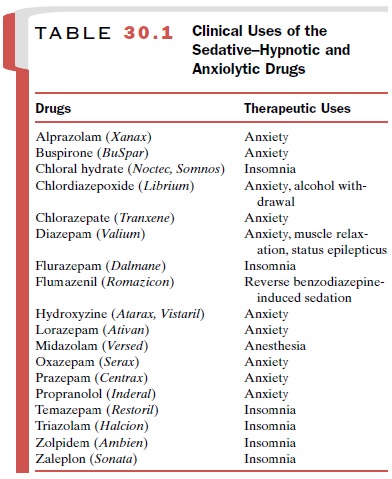 The benzodiazepines bind with high affinity to specific macromolecules within the central nervous system. These benzodiazepine-binding sites (receptors) are closely associated with the receptors for γ-aminobutyric acid (GABA), which is the major inhibitory neurotrans-mitter in the mammalian brain.

Benzodiazepines poten-tiate GABAergic neurotransmission in essentially all areas of the central nervous system. This enhancement is thought to occur indirectly at the postsynaptic GABAA receptor complex.

The functional significance of this drug–receptor in-teraction is that the receptor complex regulates the en-trance of chloride into the postsynaptic cells. The in-crease in chloride conductance mediated by GABA is intensified by the benzodiazepines. This facilitation of GABA-induced chloride conductance results in greater hyperpolarization of these cells and therefore leads to diminished synaptic transmission.

Another chemical class of sedative–hypnotic drugs, the barbiturates, also binds to receptors associated with the GABA–chloride ionophore, but these drugs appear to prolong rather than intensify GABA’s effects. Fig. 24.4 shows the presumed drug receptor–GABA– chloride ionophore relationship.

Benzodiazepines are usually given orally and are well absorbed by this route. Since the benzodiazepines are weak bases, they are less ionized in the relatively alka-line environment of the small intestine, and therefore, most of their absorption takes place at this site. For emergency treatment of seizures or when used in anes-thesia, the benzodiazepines also can be given parenter-ally. Diazepam and lorazepam are available for intra-venous administration.

The distribution of the benzodiazepines from blood to tissues and back again is a dynamic process with con-siderable influence on the onset and duration of the therapeutic effects produced by these compounds. Those having greater lipid solubility tend to enter the central nervous system more rapidly and thus tend to produce their effects more quickly. Several of the ben-zodiazepines have therapeutic effects that are much shorter in duration than would be predicted based on their rates of metabolism and excretion; redistribution away from the central nervous system is of primary im-portance in terminating their therapeutic effects.

Although tissue redistribution of benzodiazepines may be an important means of terminating the actions of selected members of this class of drugs, many benzodi-azepines do undergo extensive biotransformation. Metabolism takes place both by dealkylation (phase 1) and conjugation (phase 2) reactions. In many instances, dealkylation can result in the formation of pharmaco-logically active compounds. Indeed, most clinically avail-able benzodiazepines are converted in the liver to one or more active metabolites. In several cases the active metabolites have a much longer half-life than the parent compound. In one case, acid hydrolysis in the stomach converts an inactive compound (clorazepate) to an ac-tive drug (nordazepam). Figure 30.2 shows the biotrans-formations involved in the metabolism of representative benzodiazepines. The water-soluble metabolites of the benzodiazepines are excreted primarily in the urine. 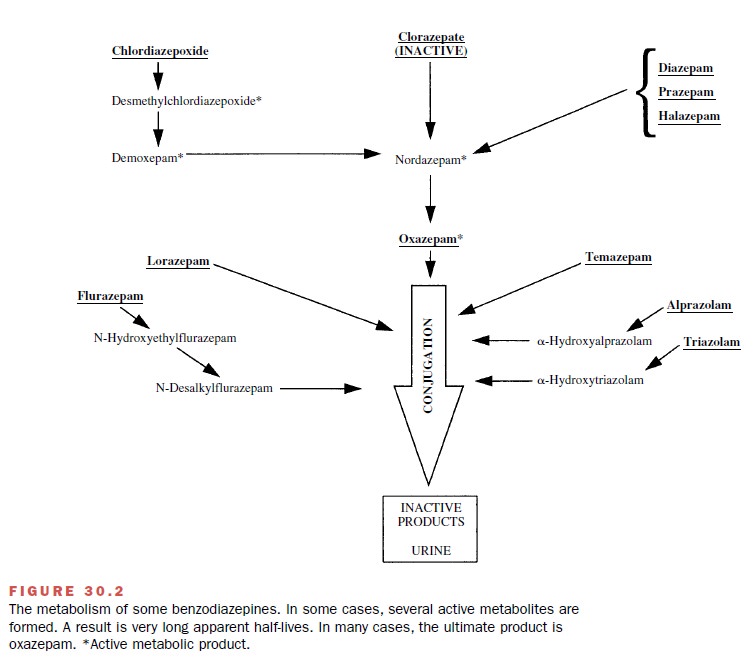 Since most of the benzodiazepines do undergo bio-transformation, it is possible that changes in liver func-tion may alter the duration of the therapeutic effect produced by these drugs. Despite the fact that few clin-ical studies have demonstrated serious toxicities associ-ated with benzodiazepine administration in individuals with compromised liver function, prudence in the use of these compounds in the elderly and in individuals with liver disease seems advisable.

One of the great disadvantages associated with many of the sedative and hypnotic drugs (e.g., barbitu-rates, propanediol carbamates), which have now largely been replaced by the benzodiazepines, is the fact that those drugs are very effective inducers of hepatic drug-metabolizing enzymes. Since the benzodiazepines are only weak inducers of hepatic microsomal enzymes, they cause relatively few clinically significant drug in-teractions related to metabolism of other drugs.

Although it is widely claimed that the benzodiazepine drugs have a specific calming or anxiolytic effect, their most prominent and easily quantifiable action is central nervous system depression. In very low therapeutic doses, this depression manifests as relief of anxiety that is often accompanied by a feeling of sluggishness or drowsiness. As the dose is increased, the degree of de-pression is intensified such that muscle relaxation, hyp- nosis, and a more intense central nervous system de-pression occur. This depression is related to the ability of these drugs to facilitate the inhibitory actions of GABA.

A significant advantage of the benzodiazepines over other central nervous system depressants (e.g., the bar-biturates) is that they possess a much greater separation between the dose that produces sleep and the dose that produces death. This increased margin of safety has been one of the major reasons benzodiazepines have largely replaced the barbiturates and other types of seda-tive–hypnotics in the treatment of anxiety and insomnia. In addition, benzodiazepine administration is associ-ated with few side effects.

Anxiety disorders are among the most common forms of psychiatric illness. Anxiety often accompanies other psychiatric disease and such medical illnesses as angina pectoris, gastrointestinal disorders, and hypertension.

Anxiety that results from fear caused by an acute illness or a stressful event, such as a divorce or the loss of a loved one, is usually self-limiting and can be of rela-tively short duration. Other disorders that have anxiety as a component are not necessarily associated with a life event, and may persist for considerable periods, even throughout the individual’s life.

Both acute and chronic anxiety can be treated with benzodiazepines, although it is anticipated that for most anxiety disorders counseling will also play an important role. Benzodiazepines employed in the treatment of anxiety should be used in the lowest effective dose for the shortest duration so that they will provide maxi-mum benefit to the patient while minimizing the poten-tial for adverse reactions. For most types of anxiety, none of the benzodiazepines is therapeutically superior to any other. Choice of a particular agent is usually made on the basis of pharmacokinetic (Table 30.2) con-siderations. A benzodiazepine with a long half-life should be considered if the anxiety is intense and sus-tained. A drug with a short half-life may have advan-tages when the anxiety is provoked by clearly defined circumstances and is likely to be of short duration. 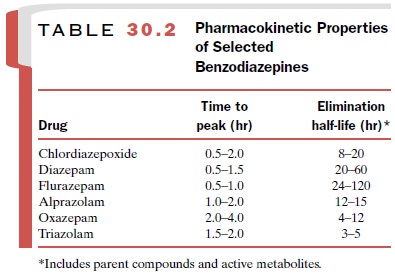 All of the benzodiazepines will produce sedative– hypnotic effects of sufficient magnitude to induce sleep, provided that the dose is high enough. However, the aim in the treatment of sleep disorders is to induce sleep that is as close as possible to natural sleep so that the patient falls asleep quickly, sleeps through the night, and has sleep of sufficient quality to awake refreshed.

Extensive sleep studies have been conducted with a variety of sedative–hypnotic drugs, and all of these drugs appear to alter the normal distribution of rapid eye movement (REM) and non-REM sleep. Most of the older sedative–hypnotic agents markedly depress REM sleep. In contrast, when the benzodiazepines are used in appropriate doses, they depress REM sleep to a much smaller extent.

As with treatment of anxiety, the choice of a particular benzodiazepine to treat a sleep distur-bance is again generally based on pharmacokinetic cri-teria. While longer-acting compounds may ensure that a patient will sleep through the night, they also may cause cumulative effects resulting in daytime sluggishness or drug hangover. Shorter-acting compounds avoid the hangover problem, but their use may be associated with early awakening and an increase in daytime anxiety.

Nearly all central nervous system depressants have some capacity to suppress seizures by virtue of their de-pressant activity on the brain and spinal cord. Clonazepam and diazepam are two benzodiazepines that depress epileptiform activity and are used in the treatment of epilepsy and seizure disorders .

Benzodiazepines have the capacity to produce a calm-ing effect and to cause anterograde amnesia, in which the patient cannot recall events that took place for some time after the drug was administered. Benzo-diazepine-induced sedation and amnesia are deemed useful in the preparation of patients for anesthesia, surgery, and other frightening or unpleasant medical and dental procedures and diagnostic tests. Midazolam is a frequently used anesthetic benzodiazepine .

Benzodiazepines have the capacity to depress polysyn-aptic reflexes and have been shown to decrease decere-brate rigidity in cats and spasticity in patients with cere-bral palsy. What is not clear is whether they can, in humans, relax voluntary muscles in doses that do not cause considerable central nervous system depression. Nevertheless, benzodiazepines, such as diazepam, are often prescribed for patients who have muscle spasms and pain as a result of injury. In these circumstances, the sedative and anxiolytic properties of the drug also may promote relaxation and relieve tension associated with the condition.

Withdrawal from long-term high-dose use of alcohol or sedative–hypnotic drugs can be life threatening if phys-ical dependence is present. Benzodiazepines, such as chlordiazepoxide (Librium) and diazepam (Valium), are sometimes used to lessen the intensity of the with-drawal symptoms when alcohol or sedative–hypnotic drug use is discontinued. Benzodiazepines are also em-ployed to help relieve the anxiety and other behavioral symptoms that may occur during rehabilitation.

Most adverse effects associated with use of the benzodi-azepines are related to their ability to produce central nervous system depression. These include drowsiness, ex-cessive sedation, impaired motor coordination, confusion, and memory loss.These effects are most troublesome dur-ing the initial week or two of treatment. Subsequently, the patient becomes tolerant and these effects produce less difficulty. Although for most individuals these symptoms are mild, patients should be cautioned against engaging in potentially dangerous tasks such as operating machinery or driving a car during the initial treatment period.

Less common adverse effects include blurred vision, hallucinations, and paradoxical reactions consisting of excitement, stimulation, and hyperactivity. Also, a vari-ety of gastrointestinal complaints occur, and blood dyscrasias have been reported, but these are rare. Benzodiazepine administration during pregnancy, deliv-ery, or lactation has the potential to have adverse effects on the fetus or newborn.

As with other central nervous system depressants, the effects of benzodiazepines are additive with those of ethanol. Patients should be warned that ethanol-containing beverages may produce a more profound de-pression when taken simultaneously with a benzodi-azepine.

One of the major reasons for the popularity of the benzodiazepines is their relative safety. Overdoses with the benzodiazepines occur commonly, but fatal toxic oc-currences are rare. Fatal intoxications are more likely in children, in individuals with respiratory difficulties, and in individuals who have consumed another central ner-vous system depressant, such as alcohol. After an over-dose, the patient begins a deep sleep that may last for 24 to 48 hours, depending on the dose. However, even with large overdoses, the patient can usually still be aroused.

Tolerance and dependence do occur with the use of benzodiazepines. Discontinuation of drug administra-tion, particularly abrupt withdrawal, can be associated with a variety of symptoms, including rebound insomnia and rebound anxiety. The level of insomnia or anxiety may even exceed that which preceded the treatment. Usually, a gradual tapering of the dose until it is eventu-ally discontinued lessens the likelihood of a withdrawal reaction, although in some individuals even this method of drug removal can result in anxiety, apprehension, tension, insomnia, and loss of appetite. More severe symptoms may occur when an individual withdraws from a supratherapeutic dose, particularly if the drug has been taken for months or years. These symptoms can include, in addition to those already mentioned, muscle weakness, tremor, hyperalgesia, nausea, vomit-ing, weight loss, and possibly convulsions.

When used with other sedative–hypnotics or alcohol, the benzodiazepines will produce additive central ner-vous system depression.