The basicity of negatively charged compounds depends on the electroneg- ativity of the atoms bearing the negative charge.

Oxygen anions are more basic than halides. The basicity of neutral mole- cules  can  be  explained  by  comparing  the  stability  of  their  positively charged conjugate acids. Amines are more basic than alcohols since nitro- gen is less electronegative than oxygen and more capable of stabilizing a positive charge. Alkyl halides are extremely weak bases because the result- ing  cations  are  poorly  stabilized  by  a  strongly  electronegative  halogen atom.

pKb  is a measure of basic strength. The lower the value of pKb  the stronger the base. pKa and pKb are related by the equation pKa  +  pKb  =  14. Therefore, a knowledge of the pKa value for an acid allows the pKb of its conjugate base to be calculated and vice versa.

Amines are weak bases. They have a lone pair of electrons which can bind to a proton and are in equilibrium with their conjugate acid in aqueous solution. Amides are not basic because the lone pair of electrons on the nitrogen is involved in a resonance mechanism which involves the neighboring carbonyl group.

Electronegativity has an important influence to play on basic strength. If we compare the fluoride ion, hydroxide ion, amide ion and the methyl carbanion, then the order of basicity is as shown (Fig. 1).

Electronegativity also explains the order of basicity for neutral molecules such as amines, alcohols, and alkyl halides (Fig. 3).

These neutral molecules are much weaker bases than their corresponding anions, but the order of basicity is still the same and can be explained by considering the relative stability of the cations which are formed when these molecules bind a proton (Fig. 4).

Keqis normally measured in a dilute aqueous solution of the base and so theconcentration of water is high and assumed to be constant. Therefore, we can rewrite the equilibrium equation in a simpler form where Kb is the basicity con-stant and includes the concentration of pure water (55.5 M). pKb is the negative logarithm of Kb and is used as a measure of basic strength (pKb = - Log10Kb).

A large pKb indicates a weak base. For example, the pKb values of ammonia and methylamine are 4.74 and 3.36, respectively, which indicates that ammonia is a weaker base than methylamine.

pKb and pKa are related by the equation pKa + pKb = 14. Therefore, if one knows the pKa of an acid, the pKb of the conjugate base can be calculated and vice versa.

Inductive effects affect the strength of a charged base by influencing the negative charge. For example, an electron-withdrawing group helps to stabilize a negative charge, resulting in a weaker base. An electron-donating group will destabilize a negative charge resulting in a stronger base. We discussed this when we compared the relative acidities of the chlorinated ethanoic acids Cl3CCO2H, Cl2CHCO2H, ClCH2CO2H, and CH3CO2H. Trichloroacetic acid is a strong acid because its conjugate base (the carboxylate ion) is stabilized by the three electronegative chlorine groups (Fig. 6).

The chlorine atoms have an electron-withdrawing effect on the negative charge which helps to stabilize it. If the negative charge is stabilized, it makes the conju-gate base less reactive and a weaker base. Note that the conjugate base of a strong acid is weak, while the conjugate base of a weak acid is strong. Therefore, the order of basicity for the ethanoate ions Cl3CCO2-, Cl2CHCO2-, ClCH2CO2-, and CH3CO2- is the opposite to the order of acidity for the corresponding carboxylic acids, that is, the ethanoate ion is the strongest base, while the trichlorinated ethanoate ion is the weakest base.

Inductive effects also influence the basic strength of neutral molecules (e.g. amines). The pKb for ammonia is 4.74, which compares with pKb values for methylamine, ethylamine, and propylamine of 3.36, 3.25 and 3.33 respectively. The alkylamines are stronger bases than ammonia because of the inductive effect of an alkyl group on the alkyl ammonium ion (RNH3+;Fig. 7). Alkyl groups donate electrons towards a neighboring positive center and this helps to stabilize the ion since some of the positive charge is partially dispersed over the alkyl group. If the ion is stabilized, the equilibrium of the acid–base reaction will shift to the ion, which means that the amine is more basic. The larger the alkyl group, the more significant this effect.

If one alkyl group can influence the basicity of an amine, then further alkyl groups should have an even greater inductive effect. Therefore, one might expect secondary and tertiary amines to be stronger bases than primary amines. In fact, this is not necessarily the case. There is no easy relationship between basicity and the number of alkyl groups attached to nitrogen. Although the inductive effect of more alkyl groups is certainly greater, this effect is counterbalanced by a solvation effect.

We have already discussed how resonance can stabilize a negative charge by delocalizing it over two or more atoms. This explains why a carboxylate ion is more stable than an alkoxide ion. The negative charge in the former can be delocalized between two oxygens whereas the negative charge on the former is localized on the oxygen. We used this argument to explain why a carboxylic acid is a stronger acid than an alcohol. We can use the same argument in reverse to explain the difference in basicities between a carboxylate ion and an alkoxide ion (Fig. 9). Since the latter is less stable, it is more reactive and is therefore a stronger base. 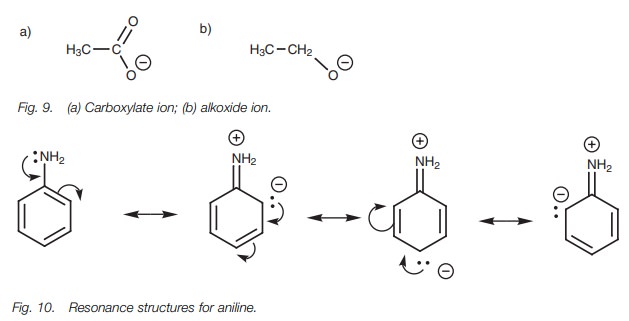 Resonance effects also explain why aromatic amines (arylamines) are weaker bases than alkylamines. The lone pair of electrons on nitrogen can interact with the π system of the aromatic ring, resulting in the possibility of three zwitterionic resonance structures (Fig. 10). (A zwitterion is a neutral molecule containing a pos-itive and a negative charge.) Since nitrogen’s lone pair of electrons is involved in this interaction, it is less available to form a bond to a proton and so the amine is less basic.

Amines are weak bases. They form water soluble salts in acidic solutions (Fig. 11a), and in aqueous solution they are in equilibrium with their conjugate acid(Fig. 11b). 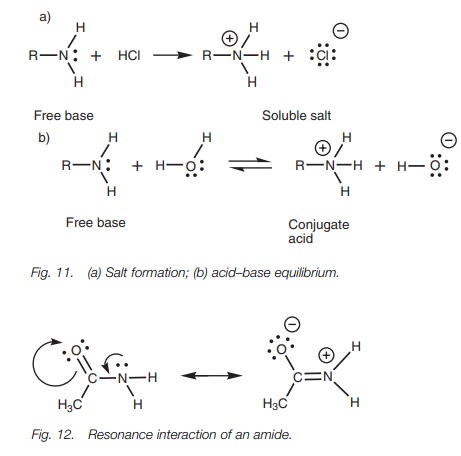 Amines are basic because they have a lone pair of electrons which can form a bond to a proton. Amides also have a nitrogen with a lone pair of electrons, but unlike amines they are not basic. This is because a resonance takes place within the amide structure which involves the nitrogen lone pair (Fig. 12). The driving force behind this resonance is the electronegative oxygen of the neighboring car-bonyl group which is ‘hungry’ for electrons. The lone pair of electrons on nitrogen forms a π bond to the neighboring carbon atom. As this takes place, the π bond of the carbonyl group breaks and both electrons move onto the oxygen to give it a total of three lone pairs and a negative charge. Since the nitrogen’s lone pair is involved in this resonance, it is unavailable to bind to a proton and therefore amides are not basic.