Water is said to be contaminated or polluted when it is contam-inated with sewage or other excreted matter from humans and animals that contains infective and parasitic agents, poisonous chemical substances, and industrial or other wastes.

Water is said to be contaminated or polluted when it is contam-inated with sewage or other excreted matter from humans and animals that contains infective and parasitic agents, poisonous chemical substances, and industrial or other wastes.

Bacterial flora in water (Table 76-1) can be classified into three groups as follows:

Natural water bacteria: These are the bacteria that are com-monly found in water free from gross pollution.

Soil bacteria: These are the bacteria that are not normalinhabitants of water but are found after being washed into the water during heavy rains.

Factors Determining the Number of Bacteria in Water

The following factors determine the number of bacteria in water:

Acidity: Acidity of water has a deleterious effect on most ofthe bacteria.

Temperature: Low temperature usually favors survival of thebacteria. However, in the presence of organic materials, bacteria tend to multiply even at high temperature.

Light: Sunlight with the wavelength of 300–400 nm is highlybactericidal, provided water is clear and static. The bactericidal effect is reduced due to the presence of organic matter and due to movement in water.

Storage: Storage of water decreases bacterial count in storedwater due to sedimentation and revitalization.

Organic matter: When organic matter is plenty, the micro-organisms tend to multiply and are present in large numbers whereas when it is less, the organisms are few.

Type of water: Surface water is more likely to be contami-nated than the deep water. The latter is usually pure.

Supply of drinking water is contaminated with sewage or other excreted matter from humans and animals; it can transmit a wide number of pathogens that includes bacteria, viruses, and parasites (Table 76-2).

Since a wide number of pathogens can be transmitted by con-taminated water, it is essential to know whether water is free of such pathogens or not. Hence, the main purpose of water testing is to know whether the water is contaminated by water-borne pathogen or not. Therefore, in the interests of public health, water supplies should be tested regularly to confirm their freedom from such contamination.

It is impracticable to make an attempt to detect all types of water-borne pathogens, any of which may be present only intermittently. Instead attempt is made on testing the water for microorganisms that indicate fecal contamination of water. These are known as indicator organisms. These are usually common intestinal commensal bacteria, which are universally present in and excreted in large numbers in human and animal feces. They are rarely found in other sources.

The presence of indicator organisms indicates that:

·           the fecal bacteria have not been killed or removed by purifi-cation processes, and

·           the water supply, therefore, is liable to be contaminated with dangerous intestinal pathogens.

Some of the organisms that are used as indicator organisms are as follows:

Coliforms: These are the bacteria that occur in large numbersin sewage and feces. They are also found in the environment in the absence of fecal contamination. Traditionally, these are members of the Enterobacteriaceae, which grow in the presence of bile salts and produce acid and gas from lactose within 48 hours at 37°C. The total coliform count is widely regarded as the most reliable indicator of potable water quality.

Fecal streptococci: These bacteria are found in the intestinaltract of humans and animals. They belong to the genus Enterococcus, and are catalase-negative and Gram-positive cocci.They can survive at 60°C for 30 minutes, and can grow at a pH of 9.6 and in the presence of 6.5% sodium chloride.

Sulfite-reducing clostridia: These are members of thegenus Clostridium, which can reduce sulfite to sulfide. The most important of the group isClostridium perfringens. Although it is less numerous in human feces than other indi-cator organisms, its spores can survive in the environment and treatment processes better than most of other indicator bacteria.

Water samples should be collected in heat-sterilized bottles of 250 mL capacity with ground glass stoppers. A 0.23 mL of fresh 1.8% solution of sodium thiosulfate crystal is added into the bottle before sterilization, to neutralize the bactericidal effect of any chlorine or chloramine in the water.

Sampling from a tap or pump outlet: When collecting fromtaps, allow the water to run to waste for 2–3 minutes before running it into the bottle. Then the stopper of the bottle is opened, it is filled with water, and the stopper is replaced.

Sampling from a reservoir, such as stream, river, lakes, and tanks: When sampling from streams or lakes, the bottleis opened at a depth of about 30 cm with its mouth facing the current and it is ensured that the water entering the bottle has not been in contact with hands.

Sampling from a well: The sampling bottle is tied with astone and a clean cord of suitable length and is lowered to the required depth in the well. The bottle is completely immersed in the water. When the bottle is completely filled, it is pulled out and then it is stoppered. It is ensured that the bottle does not touch the side of the well at any time. The bottle, after collection of water, is wrapped by a Kraft paper and is labeled with following details: the source, time, and date of collection of water samples. The bottle is transported immediately pref-erably within 6 hours of collection in a cool container being protected from the sunlight.

Following tests are generally done for the routine bacteriologi-cal analysis of water:

Presumptive coliform count: The test is called presumptivecoliform count because the reaction demonstrated may occa-sionally be due to the presence of some other microorganisms. This is a multiple tube method in which measured volumes of water and dilutions of water are added to a series of tubes or bottles containing a liquid indicator medium. The most com-mon medium used is double-strength and single-strength MacConkey broth containing bromocresol purple and an inverted Durham’s tube to detect the production of gas. 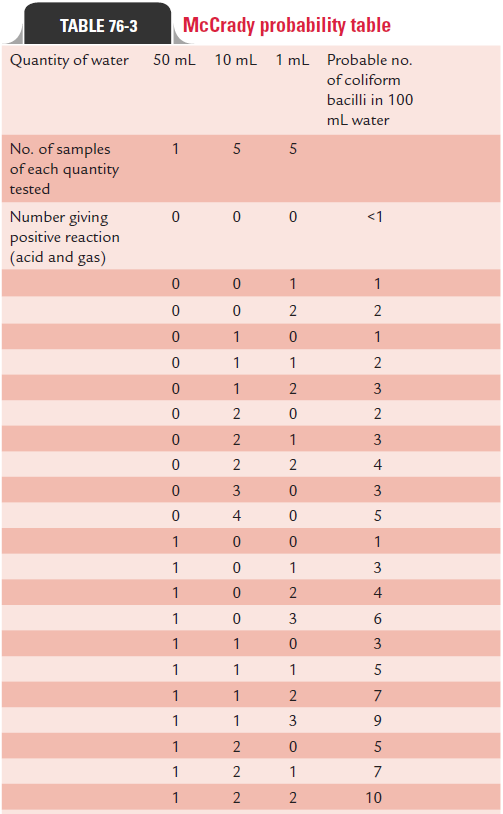 Differential coliform count: Differential coliform countis carried out by Eijkman test. Some spore-bearing bacteria give false-positive reactions in the presumptive coliform test. The Eijkman test is used to determine whether the coliform bacilli detected in the presumptive test are Escherichia coli or not. The test is carried out after the usual presumptive test and is performed by inoculating subcultures from the posi-tive presumptive tests at 44°C and 37°C into fresh tubes of single-strength MacConkey broth with Durham’s tube. Those tubes showing gas in Durham’s tube after incubation at 44°C after 24 hours indicate the presence of E. coli. Confirmation of E. coli is made by subculturing on the solid media and test-ing the color for indole production and citrate utilization (Fig. 76-1). 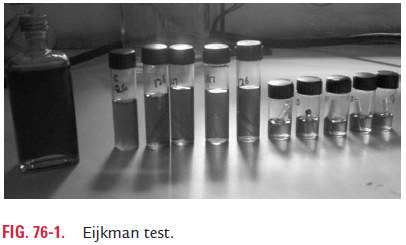 The test is carried out after the usual presumptive test and is performed by incubating subcultures from the positive pre-sumptive tests at 44°C and 37°C into fresh tubes. It is incu-bated at 45°C for 18 hours. The presence of acid in the medium indicates the presence of Enterococcus faecalis. Further confirma-tion of E. faecalis is made by subculturing on the MacConkey medium.

Detection of C. perfringens: It is detected in water samples byinoculating it in litmus milk medium and incubating it anaero-bically at 37°C for 5 days. A typical stormy clot reaction along with formation of acid indicates the presence of C. perfringens. Further confirmation of the bacteria is made by motility and nitrate reduction test.

Membrane filtration method: In this method, a measuredvolume of the water sample is filtered through a membrane with a pore size small enough to retain the indicator bacteria to be counted. The membrane is then placed and incubated on a selective indicator medium, so that the indicator bacteria grow to produce colonies. These colonies are then identified and counted to give a measure of the contamination of the water.

Detection of specific pathogens: Vibrio cholerae,SalmonellaTyphi, etc. are the specific pathogens, which can be detectedin water sample to know the contamination. Specific selective media for these bacteria are employed to detect these in con-taminated water. For example, double-strength selenite F broth is used for S. Typhi, whereas alkaline peptone water is used for V. cholerae. Subsequently, these bacteria are identified by theircultural and biochemical characteristics.